One of our scam victim’s support group members asked a very important question:

“IS IT POSSIBLE TO NAME AND SHAME THESE CRIMINALS PUBLICLY?”

First, We Need To Ask The Question – Why Is This Important? To Victims? To Anyone?

A very large percentage of scam victims almost demand to be able to name and shame their scammers. This is almost an instinctual response after their scam ends and they are going through the “anger” stage of their grief-cycle.

It appears that this is a natural response to the injustice of the scam – to the crime that was perpetrated on each victim and their desire for justice and some form of closure.

After nearly 30 years observing scammers and victims we see this as a universal constant. Something like gravity, that affects most scam victims – except for those that remain in denial in some form – either refusing to believe or wanting to hide in shame.

When dealing with a criminal so far removed – continents away – and a law enforcement system that seems incapable of bringing justice to victims – naming and shaming seems a natural option – indeed maybe the only option!

Second, Does It Do More Harm Than Good? To Whom? To The Victim?

We see almost everywhere that there are scam victims grouping together in anti-scam groups in social media and on a few websites. Victims rush into thee groups – initially seeking support and knowledge, but most are created and administered by amateurs that are themselves reeling from their own scams – going through their own trauma and grief. Most of them are not succeeding very well in recovering either.

These anti-scam groups have their own magnetism that other victims gravitate towards. Some find our SCARS groups where we help them down a proprer path – we are a real victims’ assistance organization, but 99% are not. Most are run by people that are angry or feel that only they can change the world and use their inexperience and ignorance to show others the way – the wrong way. This is in large part why most scam victims either take very extended periods of time to recover or never recover. We call these the anti-scam hate groups – hate, rage, and anger – vigilantism – being their primary motivator behind these groups.

In the next section, we will get to the good or harm it does for victims to participate in these groups, but first let’s look at efficacy – does it do anything useful?

Before we place a score on the effectiveness of such naming and shaming or exposure approaches, let’s look at the mechanics of how it is done.

The typical approach to naming and shaming or exposing scammers is to display endless streams of scammer’s photos – exposing their fake identities.

Studies have shown that looking at criminal photos can alter your memories of the crime. A study by Alan W. Kersten &
Julie L. Earles showed that looking at mugshots can actually make a victim change who they think perpetrated the crime against them. (1)

More than 25 years of research has accumulated concerning the possible biasing effects of mugshot exposure to eyewitnesses. Two separate analyses were conducted on 32 independent tests of the hypothesis that prior mugshot exposure decreases witness accuracy at a subsequent lineup. Mugshot exposure both significantly decreased proportion correct and increased the false alarm rate, the effect being greater on false alarms – meaning misidentification. A mugshot commitment effect, arising from the identification of someone in a mugshot, was a substantial contributor to both these effects. This basically means that looking at scammer photos has an effect on a victim’s memory by adding more confusion about who was behind their crime – not in fact, but in the emotional impact. (2) There are countless studies on the reliability of looking at mugshots on the criminal justice process (4) but very few on the emotional trauma.

In addition, looking at mugshots tends to demonize and dehumanize the criminal. We see a constant dehumanization of scammers in anti-scam hate groups that express their anger against scammers through flooding their victim members with scammer photos. (3) We know from our own research that demonizing scammers – calling them names – putting them in a sub-human category, feels right for many victims. They are angry and they want to lash out against the criminals that did this to them, but this process only fuels further anger and a sense of injustice that spirals down to an even greater sense of powerlessness and rage. In our article about this you can better understand why these practices of name-calling are not beneficial for victims of scams – click here.

What surprising result that we have seen over the years is that there is a correlation between continued exposure to scammer photos and revictimization and that this is backup by academic research (5) Guilt and anger can cause a compulsion to place a victim back into the situations that cause their victimization and trauma again. This might  (in small part) help to explain why the average victim is scammed multiple times. However, we believe that this is more directly connected to the failure of these groups to teach the needed behavioral changes so that victims can learn real safety behaviors.

In summary, in our experience, what the continuous or extending exposure to scammers photos does to a victim is:

The constant exposure of scammer photos in most anti-scam groups serves to increase trauma by providing a greater sense of unease, hopelessness, and anger against scammers. It increases a sense of isolation and dependency on the victim community which is neither healthy nor beneficial in the victim’s prospects for emotional recovery from their trauma.

Third, Does It Do Anything? Does It Work?

With about a decade of practical experience behind all of us know, we have seen how effective this process of naming and shaming or exposing scammers has been.

WHAT HAS IT DONE?

Here are the facts based upon our own research with more than 5 million scam victims over the last decade:

Then why does everyone do it? Even SCARS has significant displays of scammer photos in social media and even has a dedicated website for it. Why do we do it?

THERE ARE THREE SIMPLE ANSWERS TO THIS:

SCARS is trying to help traumatized people recover from scams. We tried for many years to avoid the scammer photo trap, but people are just as persuaded by the social engineering of scammer photo lures as they are by the scammers themselves. The result is we adapt to what victims initially expect so that we can better help them downstream.

However, as said, the photos are a socially engineered lure that other groups use to hold victims to them for their own benefit. Our desire is that victims learn what they need and then turn their back on us and the world of scams, having learned how to avoid them in the future. We do hope that many will aid in proper recovery care and education for the public and those unfortunately who have been scammed, but helping to return people to normalcy is our goal.

There are two main problems with this.

It is useless to rely on cataloged names for any purpose. Scammers are not caught from names posted in social media, they are almost always caught by their local actions. Meaning that only about 3% of scammers are caught from reporting. 97% are caught because that made local mistakes that identified them to local police. There are exceptions however.

It is important to report all crime to the police, because more than anything, this is what allocates money and resources for law enforcement to fight and take action against scams.

It is essential to continue to report all scams and scammers so the resources become available. Report them here on this website or on www.Anyscam.com » 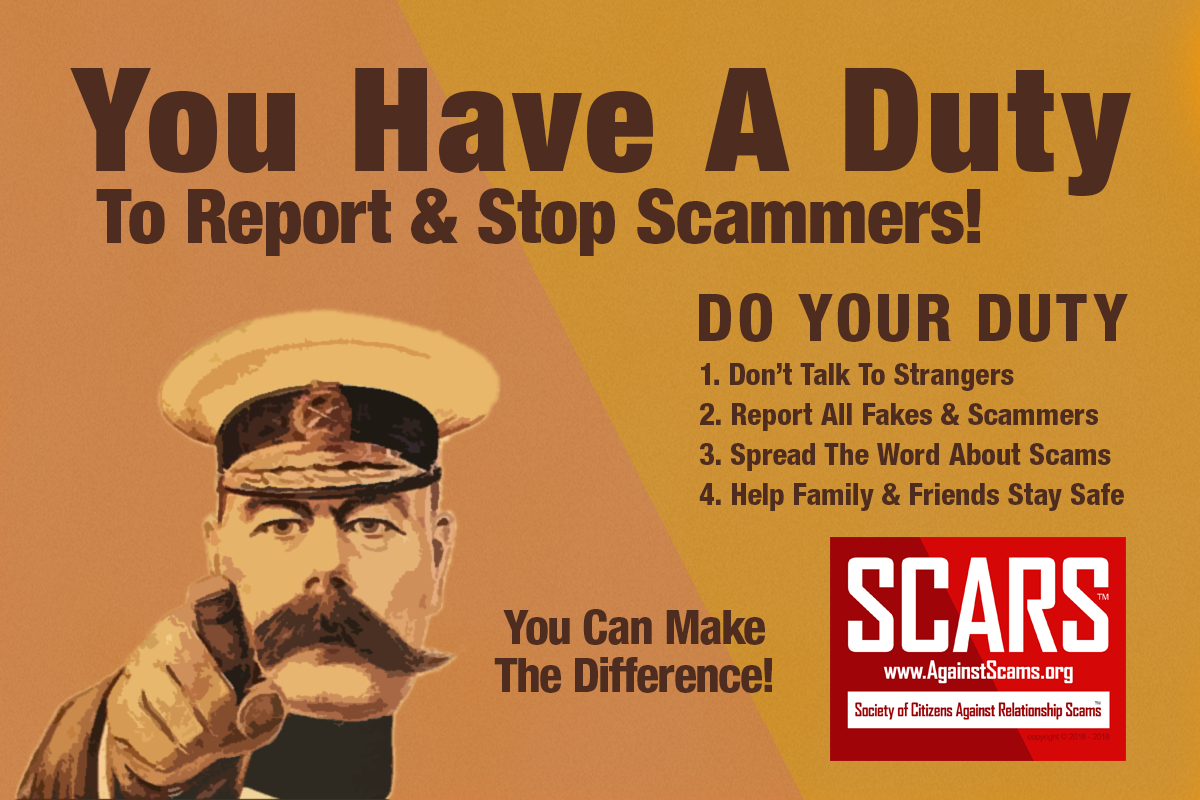 We Do Have One Of The Largest Libraries Of Scammer Photos Too:

VICTIM ADVISORY: Viewing photos of scammers – either stolen photos or real photos – can have a negative effect on your emotional state. We advise against viewing scammer photos after you were involved in a romance scam.

To See the SCARS Library of Scammer Photos Visit ScamsOnline.org » 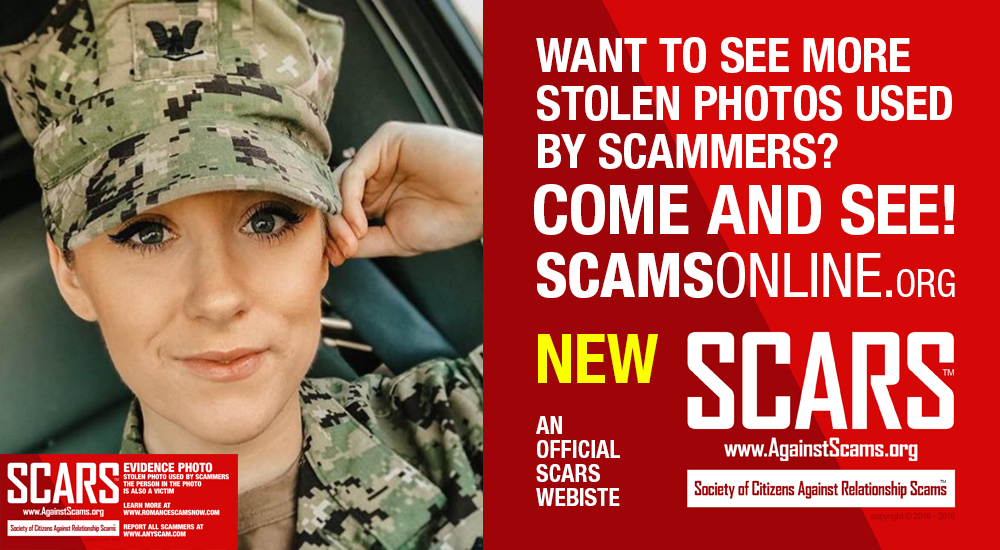 The people pictured in the stolen photos used by scammers are victims too!

Do NOT track them down – you do not know them or have a relationship with the, If you do, you are cyberstalking. Leave them alone. Their lives are being made miserable by the fact that their face and identity are being stolen and used to scam people around the world.