SCARS|RSN Content Table of Contents hide
1 SCARS™ Insight: Scam Recovery & Name Calling – Please Just Stop It!
1.1 Name Calling and What It Implies – Be Careful What You Imply About Yourself When You Resort To Name Calling
1.2 After You Are Scammed You Feel Anger And Rage And Hate Towards Your Scammer!
1.3 Why Name-Calling Is Despicable
1.4 STOP CALLING SCAMMERS NAMES!
1.5 Scammers Are Criminals
1.6 Think About What It Says About YOU If They Were All The Things You Accuse Them Of Being?
1.7 Every Time You Call A Scammer These Names You Are Also Insulting The Victims They Outsmarted And Stole From!
1.8 Enough Is Enough, Don’t You Think?
1.9 We Don’t Like Them But We Recognize Them For What They Are!
1.10 What Do You Say?
1.11 Remember This Is Not About What It Does To The Scammer – It Is About What It Does To You!
1.12 The Latest SCARS|RSN Posts
1.13 SCARS™ Guide: New Fake Money Recovery Scams
1.14 SCARS™ Scam Warning: New “Brushing” Parcel Scam
1.15 SCARS™ Special Report: Nigerian EFCC Collapses Without Director Magu!?
1.16 SCARS™ Insight: Ghana Scammer Study – Rationalizing Online Romance Fraud
1.17 SCARS™ Special Report: INTERPOL Report Shows Alarming Rate Of Cyberattacks During COVID-19
1.18 SCARS™ Insight: The Young Nigerian & West African Women Scammers
2 MORE INFORMATION
2.1 Tell us about your experiences with Romance Scammers in our « Scams Discussion Forum on Facebook »
2.2 FAQ: How Do You Properly Report Scammers?
2.3 Please be sure to report all scammers « HERE » or on « www.Anyscam.com »
2.4 Legal Notices:

After You Are Scammed You Feel Anger And Rage And Hate Towards Your Scammer!

It is natural to want to put the scammer down, but is it helpful?

People call other people names for a variety of reasons but mostly it only diminishes them.

Why Name-Calling Is Despicable

Extracted from an article By Emil Caillaux on the ThooughtCatalog

It is said that mankind only came into its own when it was able to recognize itself and others as actual people. Since then, however, we’ve done a pretty crappy job. Calling people names seems to be a practice as old as humanity itself.

However, lately a particularly nasty undercurrent of name-calling seems to be pervading society as a whole.

If someone calls someone else any of the above words within earshot (or screenshot) of other people, whether they really mean it or if it’s in jest or in an endearing fashion, they open the floor to have it used on them. The girl who calls her friends “bitches” at a bar (or, “betches,” because one letter clearly makes a difference) will more than likely be called one if someone gets pissed off at her.

By calling someone a name, what some people attempt to do is encase their opponent under a label deemed by society to be negative, minimizing them and whatever they were standing for. In reality, by doing so, they are allowing themselves to being labeled, and also lose both the high ground and the argument: no one has ever called someone any of the words specified above and received a response along the lines of, “You’re SOOO right. I am EXACTLY what you just called me. Tell me ALLLLL the things I’m doing wrong.” Calling someone a name equals an immediate forfeit and the validation and lionization of the other side.

Worst of all, however, should be the following: calling someone names is a sign that they are neither smart nor witty enough to defend themselves with a logical argument. “But the other person isn’t being logical and I don’t have enough time to lay it out for them” is a common defense. Balderdash. If they are engaging in a discussion spirited enough to qualify someone as beneath them, then they have a stake in being right and should take enough time to achieve that goal. Using a curse word is like taking a cannon to a knife fight — it’s cheap, it’s cowardly, and most of the time, it’s completely unnecessary and will only make it worse.

If someone really feels strongly about it and has an overwhelming need to call someone disgusting names they should do so privately, far from the eyes of other people, where they can truly, purely express themselves in as honest a fashion as they perceive is correct. These people should not be surprised, however, if the object of their attack takes offense and rips their head off.

I’m not attempting to be Emily Post – quite the opposite. I’m not holier-than-thou. I’m not a Boy Scout. But, like my grandfather told me once, “it doesn’t matter how the other person behaves in a fight; in the long run, it matters how you behave.” Calling someone a name is a lazy person’s resource. It takes away all of their collected knowledge, their education and their manners, putting them in the same class as barbarian trolls who don’t know any better.

The best arguments are those in which people use their brains. Where people take full advantage of thousands of years of evolution and use their words not as a blunt instrument, but in a way that would put Socrates to shame. If you know anyone who fits the description above (and hopefully, you don’t) do us all a favor and teach them to be a better foil, and bask in the satisfaction of winning an argument via logic, charm and wit. It’s oh-so-much more satisfying, and in the end, we all win.

Read More About The Negative Aspects Of Name Calling Here »

They are smart. They are hard working. They are organized. Many are brilliant.

Think About What It Says About YOU If They Were All The Things You Accuse Them Of Being?

It is understandable if you were outsmarted by a smart hard working criminal, but if they were stupid and lazy?

Every Time You Call A Scammer These Names You Are Also Insulting The Victims They Outsmarted And Stole From!

You may dislike them, you may even hate them. But let’s look at the world realistically and identify things for what they are!

Enough Is Enough, Don’t You Think?

Stop insulting other victims by making up things about scammers. That’s what children do.

Let’s be adults! Let’s recognize scammers for what they are: dedicated criminals that work hard to steal from other people. They use every technique at their disposal. They win when their skills are greater than those of the victims.

They may have grown up in a different culture and are ignorant of what you know, but they knew enough to fool you and many other victims.

We Don’t Like Them But We Recognize Them For What They Are!

You may not like a Cobra but you respect it. Respecting the danger that criminals represent is critical in controlling and stopping them. Calling them names just treats them as something not worthy of caution, plus it makes other victims feel that much worse and question themselves when in reality they were overcome by an expert – like it or not!

Let’s talk about scammers as what they are. Not stupid, not lazy, but as organized professional criminals capable of inflicting incredible pain and suffering.

What Do You Say? 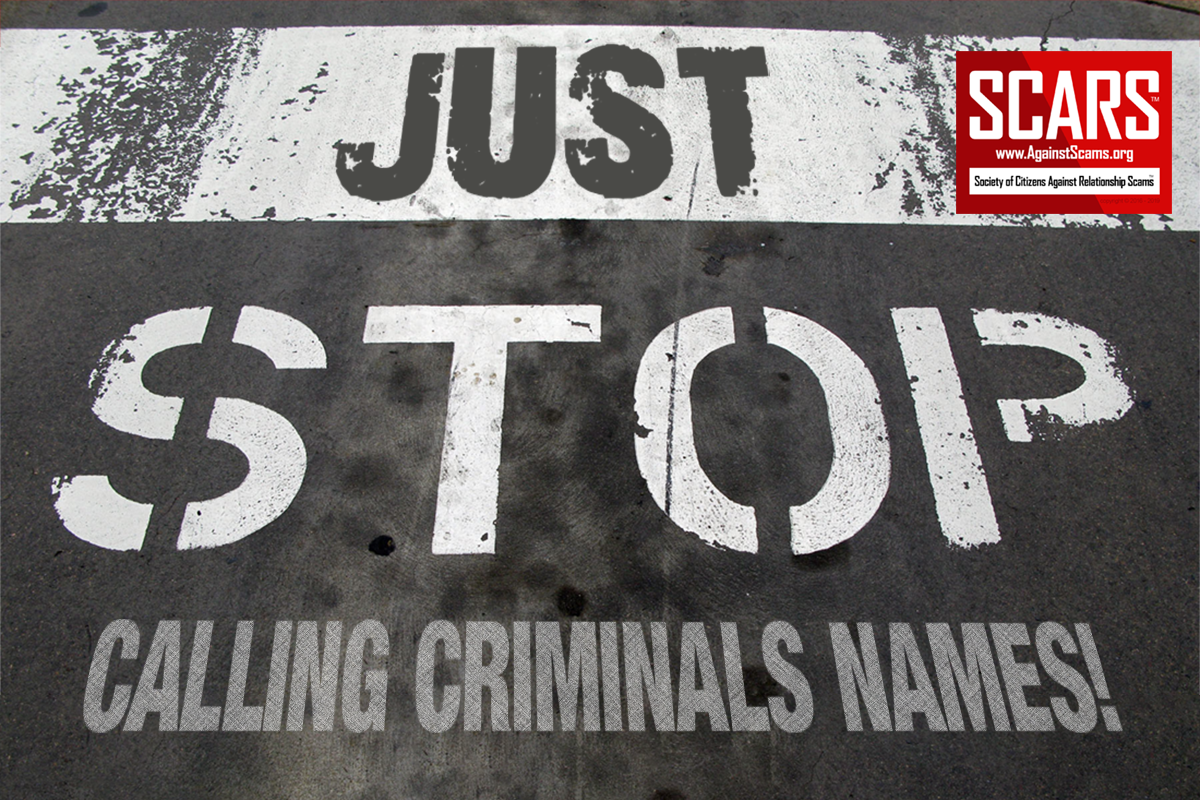