This guide covers the rules and limitations of the U.S. Military Online!

Here is the Information You Need to Understand the U.S. Military & Social Media

So much of the information is spread around about scammers and fake military is nothing but an urban legend. False information, misinterpretation, or rumors spread like lice in a preschool.

This article will help to clear up many of these preconceptions that are nothing but urban legends and replace them with fact. After all, the fact is the spotlight that exposes the dark and sends scammers scurrying away like cockroaches

Why Do You Have To Learn All Of This?

Every task in life requires certain skills to perform it safely. Some are very complex, and misoperation can result in death, others just ruining something without risk of injury. The Internet and Social Media are somewhere in the middle. Incompetence can result in severe injury to yourself and others – financial, emotionally, and even physically.

Think of the Internet like a car. You know driving a car is complex, right? Yet, every teen thinks they can just jump in and drive. They neither have the skills nor the maturity to drive competently. We all acknowledge that driving is something we have to learn and be trained for, or we risk the loss of our lives and those we care about. However, it is unlikely that anyone reading this has ever considered that the Internet is every bit as complex and dangerous to incompetent users.

What you do online can and does hurt others, and it is about time that everyone realized this.

This document is just one lesson in developing your understanding of online safety. This is your set of training wheels!

Yes, the United States has military personnel in EVERY country on Earth (except a handful). Most of these are assigned to United States Embassies, however, there are active military missions in over 100 countries – mostly fighting terrorists around the globe. Not since World War 2 has there been a deployment of United States and NATO forces in more counties.

The United States maintains its African Command in Germany, but has offices in Nigeria and deploys from there into most of Africa. To learn more about the U.S. Africa Command go here: « http://www.africom.mil »

So yes, we have soldiers in Nigerian (supporting the Nigerian Army). In fact, U.S. Special Forces (SpecOps) were killed in Chad not so long ago.

This does not mean that the soldiers you do not know are going to contact you or that they are real. They are NOT.

Social media is a part of our daily lives. The U.S. Military uses it officially as a powerful tool to share the United States Military’s story. It helps them to create meaningful connections with national and global audiences, which maintains their trust and confidence in America’s military.

The United States Department of Defense acknowledges the importance of social media and encourages its commands, Soldiers, Families, and Military Civilians to safely and accurately use social media to share their experiences and provide information.

Advances in technology and accessibility to connected mobile devices, combined with society’s acceptance of social media, have changed how information is delivered and how people, organizations, and government entities communicate.

It Is Governed By Strict Rules

Department of Defense Instruction (DODI) 8550.01 released Sept. 11, 2012, provides guidelines for the military use of social media. The instruction acknowledges that Internet-based capabilities are integral to operations across the Department of Defense, but are not to be used casually and never to share inappropriate information.

The “All Army Activities” message, published February 2017, also reemphasizes that Soldiers are held to the standards of the Uniform Code of Military Justice and Army Values when using social media, even when off duty. Commenting, posting, and linking to material that violates the UCMJ or basic rules of Soldier conduct are prohibited, along with talking negatively about supervisors or releasing sensitive information. This is the Military’s criminal code of conduct.

What Does This Mean?

It means that United States Military Personnel (and there are similar rules for NATO Personnel) are criminally responsible for what they post or communicate on social media.

THEY CANNOT POST, EMAIL, OR MESSAGE ABOUT DEPLOYMENTS AND ACTIONS THAT IN ANY WAY JEOPARDIZE THEIR MISSIONS AND THEIR FELLOW PERSONNEL, OR THE SECURITY OF THEIR OPERATIONS OR THE U.S.

This means that NO one in areas of operations is going to be reaching out to strangers.

To their existing family and friends yes – within the limitations permitted by policy, but not strangers. It also means that they are subject to obtaining permissions and review of all of their communications.

At one point or another, almost all scammers communicate by email. If they have not yet, then demand their email address and exchange emails to confirm that it works.

The United States Military communicates using a set of channels approved and authorized, and more importantly controlled by the military. This means that all personnel will use DOT MIL (.mil) email addresses. BUT there are other U.S. Military DOT domains as well

Here is the Official List of U.S. Government Domain TLD (Top Level Domains) that can ONLY be used by the United States Government.

While there are many similar domains – here is a list of ALL of the National TLDs: « https://icannwiki.org/Country_code_top-level_domain

The rule about the United States’ Military ID cards is very simple. They cannot be copied, scanned, duplicated, or photographed EVER. To do so is a crime.

IF ANYONE EVER SENDS YOU A COPY OF THEIR ID CARD IT IS (BY DEFINITION) A FAKE OR A CRIMINAL ACT! 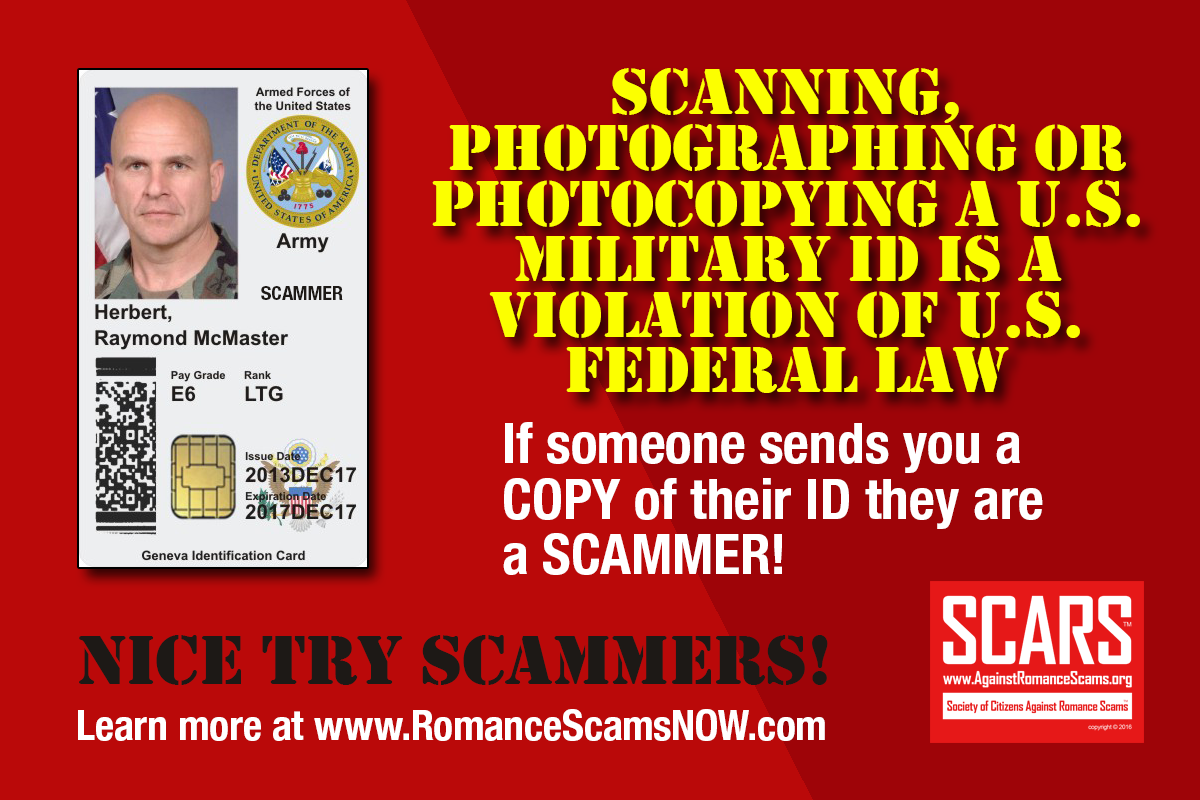 5. HOW TO IDENTIFY U.S. MILITARY PERSONNEL IN THEIR PHOTOS

One of the most important ways to identify fakes is by the uniform rank insignia. Scammers rarely understand the significance of rank, and also rank will show in photos (unless photoshopped out). Here are guides to help you identify U.S. Military ranks for Officers and Enlisted personnel.

You can also learn more about military ranks for ANY COUNTRY on Wikipedia: https://en.wikipedia.org/wiki/List_of_comparative_military_ranks

6. WHERE THE MILITARY ARE STATIONED

Military personnel are forbidden from disclosing the actual deployment location when in active combat areas. The only personnel that can are those assigned to diplomatic posts at embassies. Yet scammers love to expose their locations as a statement of authenticity.

If someone ever says where they are stationed or deployed, you can check if it is a valid military base here: https://militarybases.com/overseas/

7. THE QUESTION OF SENDING MONEY TO SOLDIERS

U.S. Military personnel are fully funded by the U.S. Government for ALL essentials. They do not pay for meals, travel, or essentials. Or for leave!

They also do not have to pay to go on LEAVE or be DISCHARGED EARLY! They just have to ask.

What about family needs? One of the common scams is to ask for money to be sent to a family member in need. Except that there are many