Home/SCARS™ Psychology of Scams: The Dark Side – Schadenfreude
Previous Next

For Many Years We Have Attempted To Understand The Obsessions Many Scam Victims Experience With Scammer Photos!

SCARS|RSN Content Table of Contents hide
SCARS™ Psychology of Scams: The Dark Side – Schadenfreude
For Many Years We Have Attempted To Understand The Obsessions Many Scam Victims Experience With Scammer Photos!
This Is Called: “Schadenfreude”
What Is Schadenfreude?
Schadenfreude is a complex emotion
How Does This Relate To Scams And Scam Victims?
Scam Victim Mindsets
Misfortune of Others
Scams & Scam Victims
Minimizing A Victim
Victim Blaming
Love Of Gore
Scammer Photo Obsession
Saviors Posting Photos
Vicarious Joy In Looking At Scammer Photos
Scammer Photo Trauma
This manifests itself in a couple of profound ways:
The Increasing Belief In Futility
In Summary
What does this help us learn from Schadenfreude and how it relates to the experience of scam victims?
Get the help you need! Find a local counselor, find a real support group, start recovering!
Tell us about your experiences with Romance Scammers in our Scams Discussion Forum on Facebook »
FAQ: How Do You Properly Report Scammers?
Please be sure to report all scammers HERE » or on www.Anyscam.com »
SCARS™ Editorial Team
Latest posts by SCARS™ Editorial Team (see all)
Related

Most victims, especially those that are still carrying substantial anger argue that they want to see scammer photos to avoid future scams.

But there is something deeper in this replacement addiction – replacing the addiction of the scam for a new addiction (or obsession) with scammer photos. It is almost like viewing the photos of scammers satisfies a need in this group of victims, like “rubbernecking” when passing a fatal car accident on the road.

“There’s something else that’s a little bit darker, that a lot of people don’t want to accept, but there’s this sense of relief that it wasn’t you.”

We see the same thing in the fascination with crime stories on the news. Partly it is cautionary alerting you to increased risk, but there is something else there! When you see it on screen, or by the side of the road, you say, “it wasn’t me, thank God.” And so there’s that same sense of relief that whatever happened – it happened to someone else instead of you.

A significant number of people have this impulse when first hearing of a tragedy.

So what is this thing and how does it apply to our situation?

This Is Called: “Schadenfreude”

PLEASURE DERIVED BY SOMEONE FROM ANOTHER PERSON’S MISFORTUNE.

That sounds harsh, but let us explain what we mean before you make a snap judgment about this topic!

Schadenfreude is the experience of pleasure, joy, self-esteem or self-satisfaction that comes from learning of or witnessing the troubles, failures, or humiliation of another.

Schadenfreude is a complex emotion

Rather than feeling sympathy towards someone’s misfortune, schadenfreude evokes joyful feelings that take pleasure from watching someone fail. This emotion is displayed more in children than adults, however, adults also experience schadenfreude, they are just better at concealing their expressions from others and even from themselves. It can be very pronounced or very subtle, and many times you are not even aware you are doing it. But it is there!

We know how to enjoy failures in others. But ask us to name this enjoyment, and our language falls into a hypocritical silence. It averts its gaze and squirms. And so we turn to the Germans, so well known for their precision to have just the right word.

From “schaden” meaning damage or harm and “freude” meaning joy or pleasure – results in “damage-joy.”

In English it might be called: “vicarious joy from misery.”

No one likes to think about their flaws, but it is in them that so much of what makes us human is revealed. Enjoying other people’s misfortunes might sound simple – a mere glint of malice, a flick of spite. But look closer and you’ll glimpse some of the most hidden yet important parts of our lives.

Basically, it is a psychological process of making yourself feel better by putting other people down or more precisely seeing others feel pain or discomfort.

It is not always out in the open, and many times the other person is not aware they are doing it. It is kind of the opposite of empathy.

How Does This Relate To Scams And Scam Victims?

How does something that sounds so evil relate to scam victims?

Let us first revert back to the types of scam victims – a taxonomy!

Remember that there are basically three main categorizations of romance scam victims (in our experience): 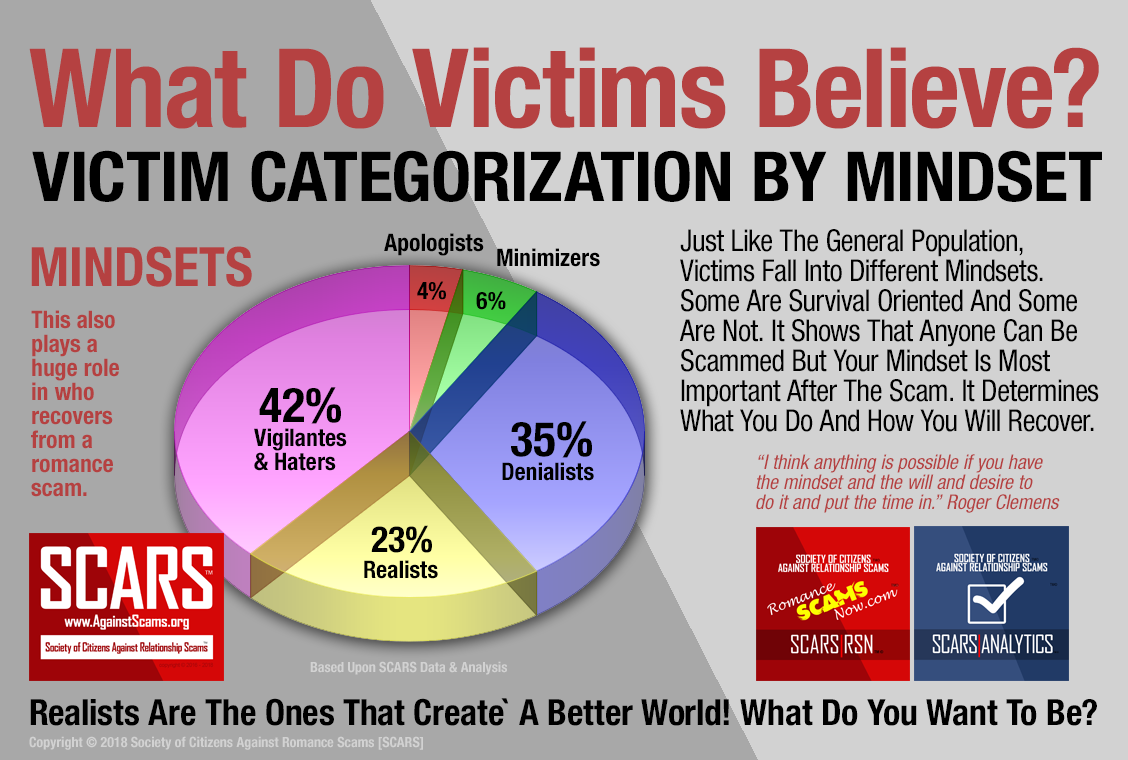 It is important to remember that recovering from a scam is a process, and during that process, victims move through these stages or mindsets.

Those that successfully recover have moved through denial, and through anger, into becoming realists. This is what allows them to acknowledge and accept their scam and move forward. Unfortunately, about 2/3 of scam victims do not migrate through to realism and stay trapped in Denial or Anger (at least for an extended period of time.)

During that phase of anger, we see the darker side of human nature more often emerge in victims. We see anger directed against other victims, against those offering help and support, against law enforcement – general rage against everyone. It is also where we see the “Saviors” emerge who think only they can save other victims!

However, it appears that in this anger is also born the Schadenfreude.

A study in Würzburg Germany carried out in 2015 found that football fans smiled more quickly and broadly when their rival team missed a penalty than when their own team scored.

“To see others suffer does one good,” wrote the philosopher Friedrich Nietzsche. “This is a hard saying, but a mighty, human, all-too-human principle.”

There has never really been a good word for these grubby delights in English. In the 1500s, someone attempted to introduce “Epicaricacy” from the ancient Greek, but it didn’t catch on.

There could only be one solution as a journalist in the magazine “Spectator” asserted in 1926: “There is no English word for schadenfreude because there is no such feeling here.” He was wrong, of course.

When we look at how scam victims express themselves we see these tendencies emerge in many different ways.

Many victims have felt others try to minimize their experience.

From police officers to family and friends, people seem to take some delight in putting the romance scam trauma down as “not that bad” or “Not as bad as what they had experienced.”

We see the same expressions throughout society when a victim tries to relate their experience to others. The listeners tend to try to quantify it or compare it rather than just express sympathy for the pain and suffering that the victim experienced.

Sadly, this is wired into our cultures worldwide. In one form or another, now that we know of this we can see it almost everywhere – people minimizing the pain of others to feel better about themselves. While there is some disagreement, we view this as variations on Schadenfreude.

We recently saw victims trying to put down other romance scams victims as not being “real” victims because they had not lost any money. Thus th