What Happens When You Confront Your Scammer?

SCARS|RSN Content Table of Contents hide
1 SCARS™ Guide: Confronting Scammers & The Guilt or Flip Scam
1.1 What Happens When You Confront Your Scammer?
1.2 They Lie Of Course!
1.3 Not Thinking Clearly
1.4 The Victim Discovers & Confronts The Criminal
1.5 Why Is Confronting A Scammer A Bad Thing?
1.6 With Confrontation Comes More Trauma
1.7 Consequences
1.8 What’s The Problem?
1.9 The Guilt Scam Or Flip Scam
1.10 Summary
1.11 CHAT WITH SCARS™ – CLICK HERE
2 MORE INFORMATION
2.1 Tell us about your experiences with Romance Scammers in our Scams Discussion Forum on Facebook »
2.2 FAQ: How Do You Properly Report Scammers?
2.3 Please be sure to report all scammers HERE » or on www.Anyscam.com »
2.4 Legal Notices:

They Lie Of Course!

We See And Hear This Literally Every Day

A victim discovers the scam and confronts the scammer.

We tell them not to, but few listen – it’s full steam ahead until they slow down and learn.

Let Us First Say, We Are Not Attempting To Call Victims Stupid

We are attempting to point out that victims made poor decisions before, during and after the scams, and will still do it for some time after the scam. Each victim has to learn and change their behavior to reduce it or eliminate that risk.

We Hear Over And Over
Thousands Of Times A Month
How Victims Say They “Were Not Thinking Clearly” During The Scam.

The problem is that most of them are still not thinking clearly after the scam, and they will not for some time.

In The Time Period Following A Scam, Victims Do A Number Of Things That Are Very Unwise

Remember also, in the real world, there are real consequences for our actions. You learned that from the romance scam, but confronting the criminal is just compounding it again!

The Victim Discovers & Confronts The Criminal

Let’s explore that concept for just a moment: the victim has discovered a crime and now confronts the criminal.

It’s all about impaired judgment (notice we did not say they were stupid – we said their judgment was impaired, meaning they were not thinking about the consequences).

Let’s go back to the scammer confrontation. Once again the victim is a person who was manipulated and exercised poor judgment, but eventually, saw that it added up enough that they could see the obvious scam in front of them.

What do MOST victims do next?

Why Is Confronting A Scammer A Bad Thing?

Have You Considered All Of The Possibilities?

Here are a few possibilities that come from confronting scammers (actually they do happen all the time – in order from most likely to least likely):

The one major thing that is not mentioned above in this list is the significantly increased trauma that the victim subjects themselves to as a result of this.

Each victim, when they discover the crime should follow basic survival guidelines of:

“NEVER CONFRONT A CRIMINAL WITH THEIR CRIME”
ESPECIALLY FOR PROFESSIONAL CRIMINALS

Confronting an 8-year-old shoplifter has little risk for the person doing the confronting, but professional criminals are a different matter. Where did the decision come from that it is ok to confront someone like that?

However, the victim is also subjecting themselves to dramatically increased stress by the confrontation, especially confrontations that go badly and lead to threats, insults, or other abuse.

A very real part of the recovery time following a scam is actually caused by the trauma that occurred at the end of the scam.

The victim confronted the scammer and now they have to deal with it!

A very large number of scammers get angry when the scam is discovered. Most do not have the professional manipulative skills needed to flip the original scam into something new so they employ threats – which in many cases work too. Victims are emotionally fragile when the scam is discovered and a forceful threat can push them into continuing the payments for a while more. However, scammer threats, almost universally have no real power – meaning they are just more lies. In most cases, you should ignore them and cut off the scammer so you do not inflict more emotional pain on yourself by listening to the scammer.

However, scammers also work very hard to steal from their victims. They pour huge amounts of time and intellectual energy into these crimes. When they are told that they failed anger is a natural result. It is unfortunate that victims put themselves in the position of having to hear it.

THE SCAMMER BLOCKS YOU

When many scammers are told they are scammers, they immediately recognize they are not likely to get anything more and just block you.

This is not exactly what it may appear.

These scammers know from experience that victims are going to be desperate for answers or closure. Was the scammer really a scammer? Did they make a mistake and insult an honest person who loved them? The guilt goes on and on. But this is also the setup for a follow-on type of scam.

One scenario is that the victim is contacted from someone claiming to be a family member or other authority that can step in and either assert that the scammer is innocent, OR that they are indeed a scammer and they will do something to help the victim get their money back.

Even the simple act of the scammer blocking the victim can set the stage for a follow-on scam – recovery scams, intervention scams, and more.

Scammers are not the same as the victim – meaning they come from different cultures where revenge is a normal part of daily life. So revenge is something they would naturally employ if it gives them any advantage over the victim.

In the case of romance scammers, it is important to remember that scamming is very time-consuming. Scammers do not have time to waste on victims that will not pay. They will only use actions when they believe it is a good investment of their time. So revenge in any form must be considered if it will have a return on their investment. However, it is a very difficult one because most victims will pull away further if there is any revenge – so it can backfire.

Revenge can take many forms, such as threatening family or friends (these become blackmail scams); threatening a business owned by the victim (simple extortion), or disclosing secrets shared by the victim with family and friends which could embarrass the victim (again a form of blackmail). Fortunately, in today’s online world full of crazies and haters, almost anything can be explained away, so such threats have little power if viewed properly.

This is an exploding form of blackmail and extortion where victims have shared compromising photos with another (in this case the scammer) and they are then used to blackmail the victim. Sadly many romance scam victims engage in unwise activities with a totally fake stranger and have to face this. But again, like other forms of revenge, there is little power if the victim simply blocks and walks away.

The scammer counts on the victim’s own panic to enforce payments. They rarely take the time to map out who they would send them to in advance, so if you cut them off they are unlikely to bother since they will have other victims still on the hook.

HOWEVER: We have to tell you that there is some risk. So you are well advised to bring in your local police anytime there is a hint of extortion and let them advise you.

Just remember one thing about sexually explicit photos that could be used for blackmail. In today’s photoshopped world, you can simply tell your family and friends that the photos are not real.

Alright, so the deed is done, the scammer has been confronted.

This is a THREE-pronged issue:

We recommend against scam baiting because just the time invested in scam baiting helps the scammer practice language and communication skills that they can employ to be a better scammer. Confronting the scammer does the same thing – it clarifies for the scammer where the scam broke down. It gives them a point of reference that they can use to go back and improve their scripts, methods, and approaches – possibly, even change the story narrative they depend on to make it better for the next victim.

The Guilt Scam Or Flip Scam

The victim confronted their romance scammer and told them they KNOW they are a scammer.

In a large number of cases, the scammer exploits the victim’s emotions at this critical point of confusion, rejection, and anger to drop a NEW scam on the victim.

This is called the “Guilt Scam” or the “Flip Scam”

This is where the scammer “flips” the situation around by acknowledging that YES they are a scammer but that they have grown to really love the victim. They try to lay out the story that regardless of how they came to know each other, the scammer has learned to love the victim.

Many victims are confused and desperate at this point. They were in love with the fake identity, and those feelings are still flooding through them. For many, it is an easy transference from one “person” to the other. Isn’t this called “rebounding” in real relationships?

The scammer proposes that they continue to maintain contact and that somehow the scammer will pay the victim back. This gives the scammer the opportunity to spin an entirely new tale about poverty, health, and family situations into yet another scam. Because the victim was predisposed to have strong emotions already, many fall for it – hook, line, and sinker. Including sending the newly revealed scammer more money!

The issues are many in the actions of a victim when they discover their scam.

Like a “bull in china shop” they stomp through to post scam period making things worse in many cases. But, at least understanding the issue can help overcome many of them.

We hope this guide helps victims before they cause further harm to themselves. 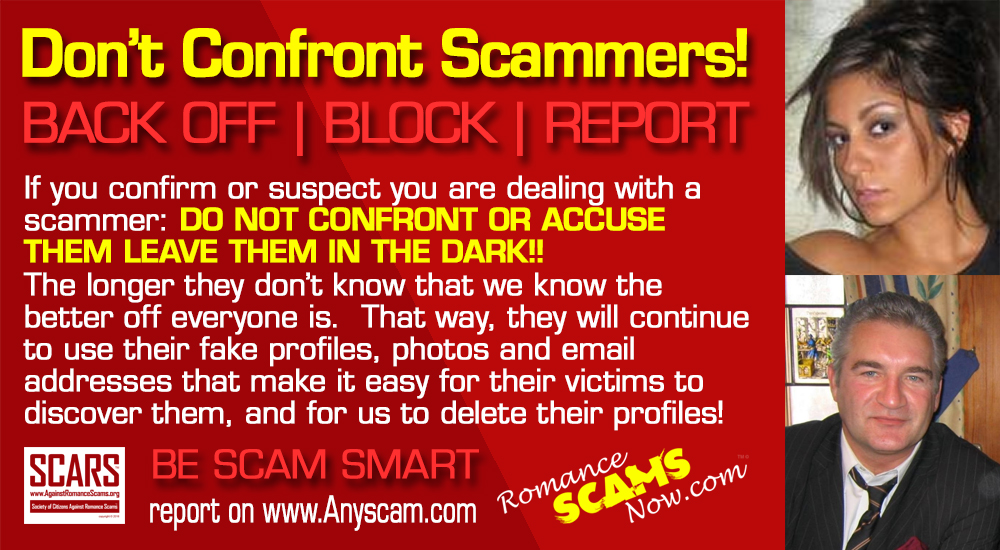