RSN Home | 6 - PSYCHOLOGY OF SCAMS | Closure & Recovery Techniques | SCARS™ Psychology of Scams: Why You Can’t Stop Looking At The Stolen Face
Previous Next

How are you dealing with a fake relationship breakup?

In a series of studies, Austrian psychologist Ursula Athenstaedt and her colleagues examined the use of recovery strategies in a sample of 876 young adults who’d recently experienced a breakup with a romantic partner. Their overall results indicate that the strategies people use to recover from a romantic breakup may depend on your gender (even if it was a scam relationship).

First, the researchers found that the men were much more likely than the women to think positively about their ex. In particular, the men still clung to the hope that they might get back with their former lovers. Meanwhile, the women tended to make a clean break from the relationship by focusing on the negative qualities of their exes and dismissing their positive aspects.

This translates into denial in the scam victim. Men carry far more denial about the scam then do women typically and have the hardest time accepting that they were scammed – somehow it must all be a big mistake.

Athenstaedt and colleagues maintained that this finding makes sense from an evolutionary perspective. That is, men maximize their reproductive fitness by engaging in multiple short-term relationships, whereas women do so by forming a long-term relationship with a man who will contribute to childrearing. From this perspective, men should hold on to the notion that their former girlfriend is still a potential partner, even while searching for alternatives on the mating market. In contrast, women should have little desire to return to a relationship that failed to meet their long-term needs.

Second, the researchers found gender differences in the types of coping mechanisms people use after a breakup. Specifically, the men were more likely to adopt “lose yourself” strategies, such as working long hours or engaging in extreme sports—or by numbing the pain through alcohol or drugs. Furthermore, men were more likely than women to jump into a rebound relationship, even when the long-term prospects were not good.

In contrast, women tended to seek out social and emotional support from friends and family. They also gave themselves time to heal before making themselves open to the possibility of a new relationship.

From a social network perspective, this finding makes perfect sense: Women usually have more friends and stronger emotional ties with them than men do. Also, women are accustomed to sharing their emotions and concerns with other women, both as talkers and as listeners.

Men, in contrast, tend to lead more solitary lives and to have more competitive relationships with other men. They’re also more dependent on their mate for social and emotional support. So when a relationship breaks up, they may lose the one person they felt comfortable opening up to.

According to David Ludden Ph.D.

Prior research has shown that men fare worse than women after a breakup. This finding holds not only for dating relationships, but also in cases of divorce or a partner’s death. The current study sheds light on the reason for this. Women make use of their extended social networks to garner the emotional support they need. In contrast, the most supportive link in men’s social networks is broken when they lose their mate, so they resort to “mind numbing” strategies that are ineffective in the long run.

For the most part, men and women do move on with their lives after a romantic breakup. But the interim period from the end of the previous relationship to securely settling in with the next can be difficult for many people. Once they’ve entered into a new relationship, both men and women report negative attitudes toward their ex—in other words, they’ve convinced themselves that what they have now is far better than what they had before. This certainly is a healthy frame of mind for nurturing a new relationship.

We See These Characteristics In Romance Scam Breakups As Well

It seems that thinking about an ex (in this case, the face that the victim fell in love with or was scammed with) is a sign that a victim still hasn’t gotten over the breakup of the scam relationship.

At the same time, ruminating over your romantic past could be keeping them from moving on and recovering from the scam trauma.

Instead, making a clean break with the scam and seeking out emotional support from a social support network are two important steps every victim should try to take to heal themselves after the end of a fake relationship. Yet few actually do this!

However, it takes more than just seeking out a support network, it is essential that the victims actually and actively participate to achieve any benefit from this.

A large number of romance scam victims will fixate on the face stolen by the scammers after the scam.

This fixation, which is really an obsession, will take many forms and lead to various unhealthy actions, including:

Stalking the impersonation victim in the photo

Victims will frequently track down or cyber-stalk the person who was impersonated by the romance scammer. Some victims believe that they have a duty to inform that person that they are being scammed, however in most cases this is a disguise for their deeper desire to confirm that the feelings that they have for this person are real – ignoring the fact that they have never had contact with them (just the scammer) and that they are invading the life of another victim.

These victims transfer the romantic relationship they had with the scammer that was using that face – to the real person pictured in the photos. This causes these victims to fail to realize that they are:

Some victims have been unable to understand that the face in the photo is not a scam but instead is actually a victim too!

This has resulted in calls to local police, news media, and social media postings accusing another victim of actually being the scammer. Such actions have been devastating for these impersonation victims, forcing them to file criminal charges against the original romance scam victims for their excessive actions. There are numerous cases pending against romance scam victims around the world for this.

They are just following the person!

Countless romance scam victims say they after the scam they have now tracked down the person pictured and they just follow them on social media!

But in reality, this is just another form of stalking – cyberstalking.

While this label tends to shock victims of romance scams that have been following the person they saw during the scam, the reality is this is neither healthy nor legal. 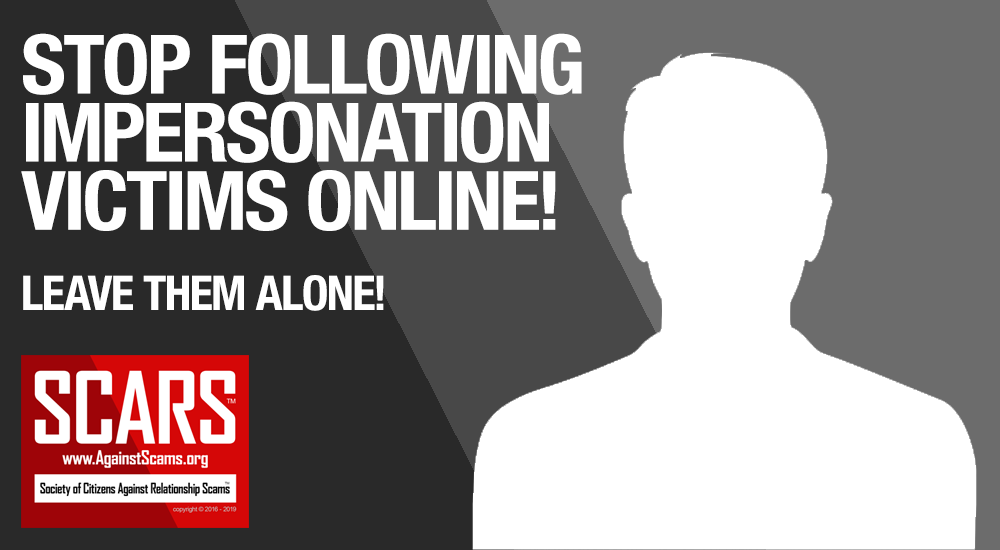 Cyberstalking is stalking or harassment carried out over the internet.

It might target individuals, groups, or even organizations and can take different forms including slander, defamation and threats. Motives may be to control or intimidate the victim or to gather information for use in other crimes, like identity theft or offline stalking.

But it doesn’t have to be anything more than an invasive involvement in another person’s life.

The reality is any time a person is fixated on another person and “follows” their every online action it can be considered cyberstalking.

Romance scam victims frequently judge the person whose images are stolen. They blame them for being “easy targets” and having their photos and information out there easy for scammers to steal.

Ironically, most romance scam victims themselves think nothing of publicly posting personal information, sharing their feelings and desires, publishing family photos and much more online.

Cyberstalking can take many different forms, but in the broadest sense, it is stalking (watching, observing, or following the life of another without their invitation) or harassment that takes place via online channels such as social media, forums or email. It is typically planned and sustained over a period of time.

Cases of cyberstalking can often begin as seemingly harmless interactions. Sometimes, especially at the beginning. However, if they become systematic, it becomes annoying and even frightening for the person being cyberstalked.

In most cases, it begins with curiosity about who the face really is. So scam victims will search out who that face belongs to.

However, being curious is one thing, and if it ended with just confirmation that there is a real person it would not be stalking. But more often than not, romance scam victims will attempt to contact this person or insert themselves into this person’s life – sometimes just a friend request, sometimes as a vigilante trying to defend the person, but in other cases forcing themselves on this person.

Just following a person online can be considered stalking.

Romance Scam Victims Frequently Believe They Have A Relationship

Many times the scam victims believe that because they had a relationship with that face that there must still be something – a connection – with the real person. This is simply a projection and is never true. The emotions that a romance scam victim feels about that face – that person – do not exist, they are projected by the scam victim, and is a clear sign that counseling or therapy should be considered to overcome this.

However innocent it may appear, once a scam victim starts sending unwanted messages to an impersonation victim the line has been crossed.

Without any clear intention of desire, cyberstalkers can traumatize impersonation victims by sending messages, friend requests, comments, and just lurking in the background for whatever they do. It is especially unnerving when such messages come from different accounts managed by the same person as frequently happens when a victim is ignored.

Such actions can and in most cases will be reported to law enforcement agencies.

Remember, no matter what the scam victim believes, the impersonation victim has no relationship with them. Regardless of the intent to warn them – they have already had hundreds or thousands of warnings from other victims who have injected themselves into the person’s life and family.

Cyberstalking doesn’t have to involve direct communications and some cyberstalking victims may not even realize they are being stalked online.

Many times scam victims will “monitor” these people through various methods such as “following” on Facebook or following on other social media.

The line is really all about invitation – on LinkedIn for example, business people invite connections, but are still able to decide who can see and connect with them. However, on Facebook, most people do not even understand their privacy settings and have not invited followers since many do not even know that is possible.

In the US, cyberstalking falls under harassment and anti-stalking laws and many countries around the world have similar laws. These laws allow for fines or even imprisonment.

Most cyberstalking legislation in the United States is done at the state level. The first U.S. cyberstalking law went into effect in California in 1999. Since then, there have been a huge number of legal cases related to cyberstalking.

One recent scam victim cyberstalking case is working its way through the courts in Germany, where a scam victim has been systematically harassing and interfering in the life of a former U.S. Army General – the scam victim befriends friends and family, has filed charges through local police, and made the retired general’s life miserable for years. But this is a more extreme case.