New Victims Please Read This: SCARSSCARS SCARS - Society of Citizens Against Relationship Scams Inc. A government registered crime victims' assistance & crime prevention nonprofit organization based in Miami, Florida, U.S.A. SCARS supports the victims of scams worldwide and through its partners in more than 60 countries around the world. Incorporated in 2015, its team has 30 years of continuous experience educating and supporting scam victims. Visit www.AgainstScams.org to learn more about SCARS. 3 Steps™

You Have Been Scammed – Now What?

This Is A Very Confusing Time For You

Your scamScam A Scam is a confidence trick - a crime -  is an attempt to defraud a person or group after first gaining their trust through deception. Scams or confidence tricks exploit victims using their credulity, naïveté, compassion, vanity, irresponsibility, or greed and exploiting that. Researchers have defined confidence tricks as "a distinctive species of fraudulent conduct ... intending to further voluntary exchanges that are not mutually beneficial", as they "benefit con operators ('con men' - criminals) at the expense of their victims (the 'marks')". A scam is a crime even if no money was lost. has just ended and you will be in shock, confusion, fear, and angerAnger Anger, also known as wrath or rage, is an intense emotional state involving a strong uncomfortable and non-cooperative response to a perceived provocation, trigger, hurt or threat. About one-third of scam victims become trapped in anger for extended periods of time following a scam. A person experiencing anger will often experience physical effects, such as increased heart rate, elevated blood pressure, and increased levels of adrenaline and noradrenaline. Some view anger as an emotion that triggers a part of the fight or flight response. Anger becomes the predominant feeling behaviorally, cognitively, and physiologically. Anger can have many physical and mental consequences. While most of those who experience anger explain its arousal as a result of "what has happened to them", psychologists point out that an angry person can very well be mistaken because anger causes a loss in self-monitoring capacity and objective observability.. You will be unsure about what to do now.

We have helped millions of scam victims, and we know that it comes down to THREE (3) BASIC STEPS. 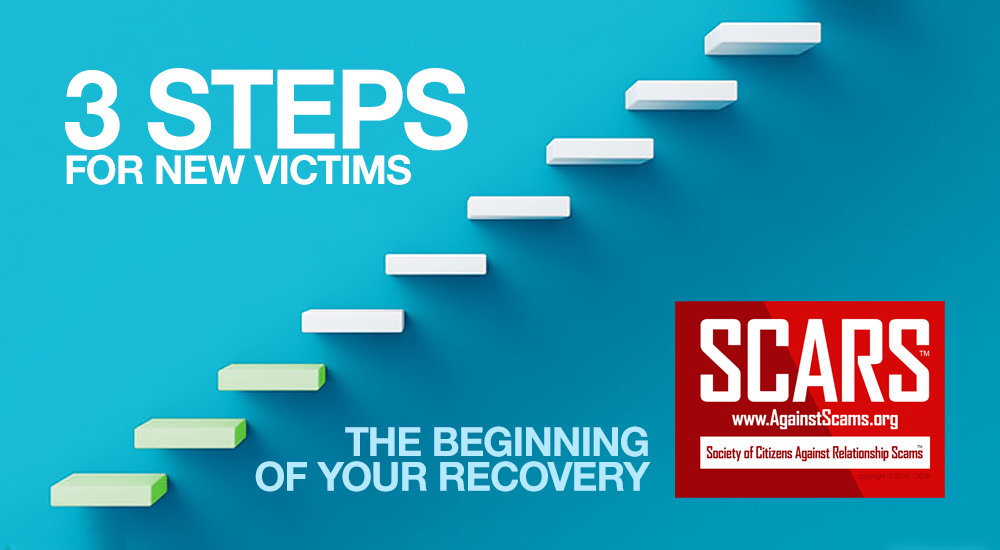 You need to understand that this was not your fault, and you are not to blameBlame Blame or Blaming is the act of censuring, holding responsible, making negative statements about an individual or group that their action or actions are socially or morally irresponsible, the opposite of praise. When someone is morally responsible for doing something wrong, their action is blameworthy. By contrast, when someone is morally responsible for doing something right, we may say that his or her action is praiseworthy. Blame imparts responsibility for an action or act, as in that they made a choice to perform that act or action..

Do not feel ashamed of what happened. The scammers are professionals – yes scammers, there was more than one – they work in teams. They are expert manipulators, and you were not prepared.