SCARSSCARS SCARS - Society of Citizens Against Relationship Scams Inc. A government registered crime victims' assistance & crime prevention nonprofit organization based in Miami, Florida, U.S.A. SCARS supports the victims of scams worldwide and through its partners in more than 60 countries around the world. Incorporated in 2015, its team has 30 years of continuous experience educating and supporting scam victims. Visit www.AgainstScams.org to learn more about SCARS.™ ScammerScammer A Scammer or Fraudster is someone that engages in deception to obtain money or achieve another objective. They are criminals that attempt to deceive a victim into sending more or performing some other activity that benefits the scammer. Urban Legends: Chapter 5 – Scammer ThreatsScammer threats Very often when a scammer is not getting cooperation from a victim or the victim refuses to send money, the scammer will then resort to threats. These treats can be of physical violence or retaliation in one of several forms, such as doing or sextortion. African and Indian scammers routinely make treats at the end of a scam. They will threaten to expose intimate photos or chats. They may even threaten to kill or harm family members. It is important to remember that African and Indians scammers are professional liars - they tell stories to achieve a result - and do not waste time if it does not get them more money. Almost all such threats are just more lies meant to intimidate victims. Most victims are safe to ignore them. However, any victim that actually feels fear should contact their local police for advice. & Blackmail

Scammer Threats & Blackmail Are Real – They Are Coming To Get You?

Scammer Threats And Blackmail – Are they real?

After you have been scammed, a multitude of feelings are going through you after you hear their threats. 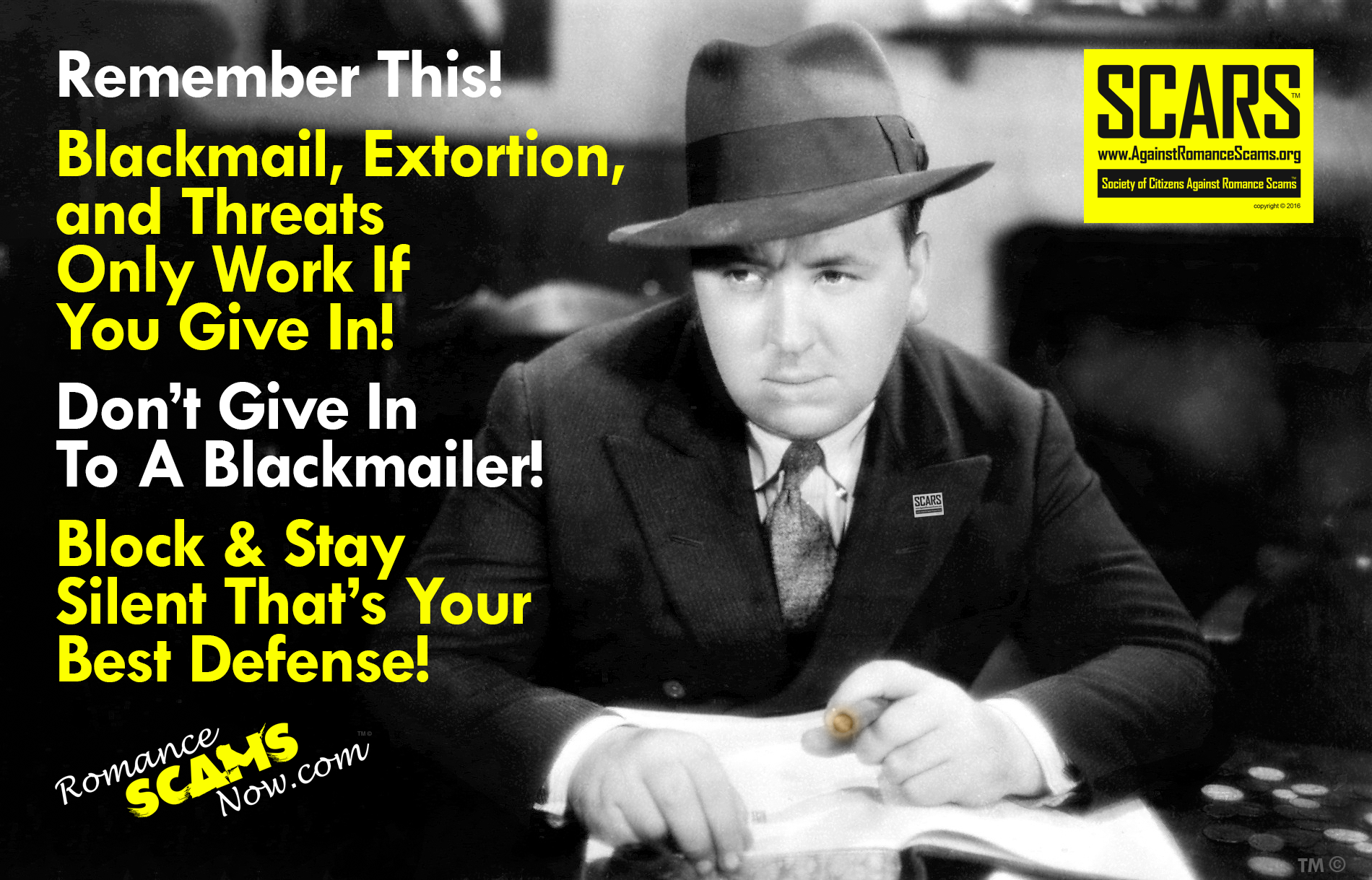 Shock, AngerAnger Anger, also known as wrath or rage, is an intense emotional state involving a strong uncomfortable and non-cooperative response to a perceived provocation, trigger, hurt or threat. About one-third of scam victims become trapped in anger for extended periods of time following a scam. A person experiencing anger will often experience physical effects, such as increased heart rate, elevated blood pressure, and increased levels of adrenaline and noradrenaline. Some view anger as an emotion that triggers a part of the fight or flight response. Anger becomes the predominant feeling behaviorally, cognitively, and physiologically. Anger can have many physical and mental consequences. While most of those who experience anger explain its arousal as a result of "what has happened to them", psychologists point out that an angry person can very well be mistaken because anger causes a loss in self-monitoring capacity and objective observability., DenialDenial Denial is a refusal or unwillingness to accept something or to accept reality. Refusal to admit the truth or reality of something, refusal to acknowledge something unpleasant; And as a term of Psychology: denial is a defense mechanism in which confrontation with a personal problem or with reality is avoided by denying the existence of the problem or reality., Confusion, Fear, And Paralysis!

It Was All A Lie!

Obviously, it was a business for the scammer and their goal was to steal money from you – to make you a willing participant in their fraudFraud In law, fraud is intentional deception to secure unfair or unlawful gain (money or other assets), or to deprive a victim of a legal right. Fraud can violate civil law (e.g., a fraud victim may sue the fraud perpetrator to avoid the fraud or recover monetary compensation) or criminal law (e.g., a fraud perpetrator may be prosecuted and imprisoned by governmental authorities), or it may cause no loss of money, property, or legal right but still be an element of another civil or criminal wrong. The purpose of fraud may be monetary gain or other benefits, for example by obtaining a passport, travel document, or driver's license, or mortgage fraud, where the perpetrator may attempt to qualify for a mortgage by way of false statements. A fraud can also be a hoax, which is a distinct concept that involves deliberate deception without the intention of gain or of materially damaging or depriving a victim.. To manipulate you into doing exactly what they wanted you to do.

In many cases, they even get victims to participate in scamming others, by receiving money or goods, and then sending them on to the scammer. Most don’t know they are involved in crime, a small number do. Those are the <span tabindex='0' class='