ScammerScammer A Scammer or Fraudster is someone that engages in deception to obtain money or achieve another objective. They are criminals that attempt to deceive a victim into sending more or performing some other activity that benefits the scammer. Urban Legends: Chapter 6
Scammers Are All Alike?

A SCARSSCARS SCARS - Society of Citizens Against Relationship Scams Inc. A government registered crime victims' assistance & crime prevention nonprofit organization based in Miami, Florida, U.S.A. SCARS supports the victims of scams worldwide and through its partners in more than 60 countries around the world. Incorporated in 2015, its team has 30 years of continuous experience educating and supporting scam victims. Visit www.AgainstScams.org to learn more about SCARS. Insight

Scammer Urban LegendUrban Legend Urban Legend An urban legend, urban myth, urban tale, or contemporary legend is a genre of modern folklore comprising stories circulated as true, especially on social media. These legends can be entertaining but often concern serious topics. They may also be confirmation of moral standards, or reflect prejudices, or be a way to make sense of societal anxieties. Urban legends are most often circulated orally but can be spread by any media, including newspapers, mobile news apps, e-mail, and social media. Some urban legends have passed through the years with only minor changes and seem impervious to exposure as untrue.: All Scammers Are Nigerian

Most victims and the public, in general, have a mistaken idea that all scammers are from one region.

It seems like every day, all you hear about are Nigerian 419419 An advance fee scam or fraud (419 scam) is a form of fraud and is one of the most common types of online confidence tricks. The scam typically involves promising the victim a significant share of a large sum of money, in return for a small up-front payment, which the fraudster claims will be used to obtain the large sum. If a victim makes the payment, the fraudster either invents a series of further fees for the victim or simply disappears. The 419 comes from the Nigerian law against this type of scam. and fake military scamsScams A Scam is a confidence trick - a crime -  is an attempt to defraud a person or group after first gaining their trust through deception. Scams or confidence tricks exploit victims using their credulity, naïveté, compassion, vanity, irresponsibility, or greed and exploiting that. Researchers have defined confidence tricks as "a distinctive species of fraudulent conduct ... intending to further voluntary exchanges that are not mutually beneficial", as they "benefit con operators ('con men' - criminals) at the expense of their victims (the 'marks')". A scam is a crime even if no money was lost., and that all of these scammers must be Nigerian.

Nothing Could Be Farther From The Truth

However, Nigerians and other West Africans do make up the bulk of online or Internet-based fraudFraud In law, fraud is intentional deception to secure unfair or unlawful gain (money or other assets), or to deprive a victim of a legal right. Fraud can violate civil law (e.g., a fraud victim may sue the fraud perpetrator to avoid the fraud or recover monetary compensation) or criminal law (e.g., a fraud perpetrator may be prosecuted and imprisoned by governmental authorities), or it may cause no loss of money, property, or legal right but still be an element of another civil or criminal wrong. The purpose of fraud may be monetary gain or other benefits, for example by obtaining a passport, travel document, or driver's license, or mortgage fraud, where the perpetrator may attempt to qualify for a mortgage by way of false statements. A fraud can also be a hoax, which is a distinct concept that involves deliberate deception without the intention of gain or of materially damaging or depriving a victim.. According to the analysis by the Society of Citizens Against Relationship Scams Inc. [SCARS], Nigerians outnumber all other online scamming regions combined by approximately 2 to 1.

What many overlook is that there are scammers in other regions too, and in each region, their behaviors and methods are quite different.

The Nigerians are famous for their email money scams and for their fake military soldier forms of romance scams, though they have perfected hundreds of variations over the last 20 years especially. The last decade has been a boom for all of the African-style scammers with a huge explosion in the numbers of Nigerian scammers operating in very large corporate groups. They will employ teams to work a victim because they have the luxury of manpower, and have had a more process-oriented approach to scamming online.

In the rest of Africa, especially West Africa – with Ghana being the leading center (outside from Nigeria) the method is similar but has a slight difference. Ghana scams rely on more individual scammers, though they work in gangsGangs A gang is normally a group or society of associated criminals with a defined leadership and internal organization that identifies with or claims control over a territory or business practice in a community and engages, either individually or collectively, in illegal, and possibly violent, behavior. Online gangs are not limited by territory and may operate side by side with other gangs while engaging in crime online. Some members of criminal gangs are initiated (by going through a process of initiation), or have to prove their loyalty and right to belong by committing certain acts, usually theft or violence, or rituals. Gangs are usually rougher and more visible than scammer cartels, and more often arrested. that allow them to bring in a co-scammer on demand – especially a woman (frequently their girlfriend or wife). Ghana scams focus greatly on scamming men, using models and porn star stolen identities. They have their pitch down to a science on these. Of course, all of the Africans use all forms and approaches depending upon where they were trained. Individual scammers rarely vary from the style or pitch they feel most comfortable with.

The Indians have grown at an amazing pace. Today most phone scams come out of Indian, Pakistan, Bangladesh, and Sri Lanka. However, the Indians are expanding into places like Vietnam and even into Latin America. Indians focus on identity-based scams and straight one-time frauds mostly, such as IRSIRS The Internal Revenue Service (IRS) is the revenue & tax service of the United States federal government responsible for collecting taxes and administering the Internal Revenue Code (the main body of federal statutory tax law.) It is part of the Department of the Treasury and led by the Commissioner of Internal Revenue, who is appointed to a five-year term by the President of the United States. The duties of the IRS include providing tax assistance to taxpayers; pursuing and resolving instances of erroneous or fraudulent tax filings; and overseeing various benefits programs. Visit www.IRS.gov to learn more. scams, jail & bail scams, grandparent scams, etc. Their goals are typically to get money quickly or to get your identity.

The Russians, Ukrainians, and Eastern Europeans focus on scamming men looking for a bride. They employ dedicated dating websites that use real women (though their identities can be fake) that can be contacted and dated both online and on real visits. However, the reality is that while the man may have actually met the girl for real it is all about getting as much money as possible. Because the men tend to visit these regions there is a real risk of violence as well.

In the case of the Philippines (and to a lesser extent other SouthEast Asian countries) these tend to be real people who are economically disadvantaged who will play a Westerner for everything they can get. You will find real women connecting with Western men and developing long-term online relationships that never come to a satisfactory conclusion because the women have either boyfriends or husbands already, and their sole purpose was to have the victim support them for as long as possible. Throughout the scamScam A Scam is a confidence trick - a crime -  is an attempt to defraud a person or group after first gaining their trust through deception. Scams or confidence tricks exploit victims using their credulity, naïveté, compassion, vanity, irresponsibility, or greed and exploiting that. Researchers have defined confidence tricks as "a distinctive species of fraudulent conduct ... intending to further voluntary exchanges that are not mutually beneficial", as they "benefit con operators ('con men' - criminals) at the expense of their victims (the 'marks')". A scam is a crime even if no money was lost., they will tell the absolute truth about themselves and their situation, except for their relationship status and how they feel about the victim. You will find a smaller number of these also in Vietnam, Thailand, and Malaysia (though Malaysia is usually run by Nigerians in their country). One thing is important to remember in the case of these, if you go there to visit them there is a real risk of violence and kidnapping.

Latin America has its share of romance scammers as well. They have been involved for at least 15 years, and follow similar techniques to the Philippines. Real people, usually real names, just with no intention to form a real relationship. There are exceptions to this, and those are mostly marriage fraud – where they WILL marry and come to your country then divorce as soon as they get their residency – typically to the U.S. or Europe. Like with the Philippines, this is mostly disorganized individuals doing it on their own and driven by poverty. However, there are now larger groups forming in Brazil and beginning to copy the Nigerian model.

Let us never forget that there are domestic scammers as well. People in Europe and North America also engage in romance scams, though the number is low, it is climbing. Here we find two primary types of scammers.

In order to avoid being scammed a whole new set of survival and defensive skills are needed. You need to not only understand how to recognize the typical African-style scammer but also those from other regions. If you understand that scammers can be fake or real, and come from any region, you will be better able to be on guard.

REMEMBER TO REPORT THEM, BLOCKBlock Blocking is a technical action usually on social media or messaging platforms that restricts or bans another profile from seeing or communicating with your profile. To block someone on social media, you can usually go to their profile and select it from a list of options - often labeled or identified with three dots ••• THEM, AND NEVER RESPOND TO SCAMMER MESSAGES THAT MANAGE TO GET THROUGH! 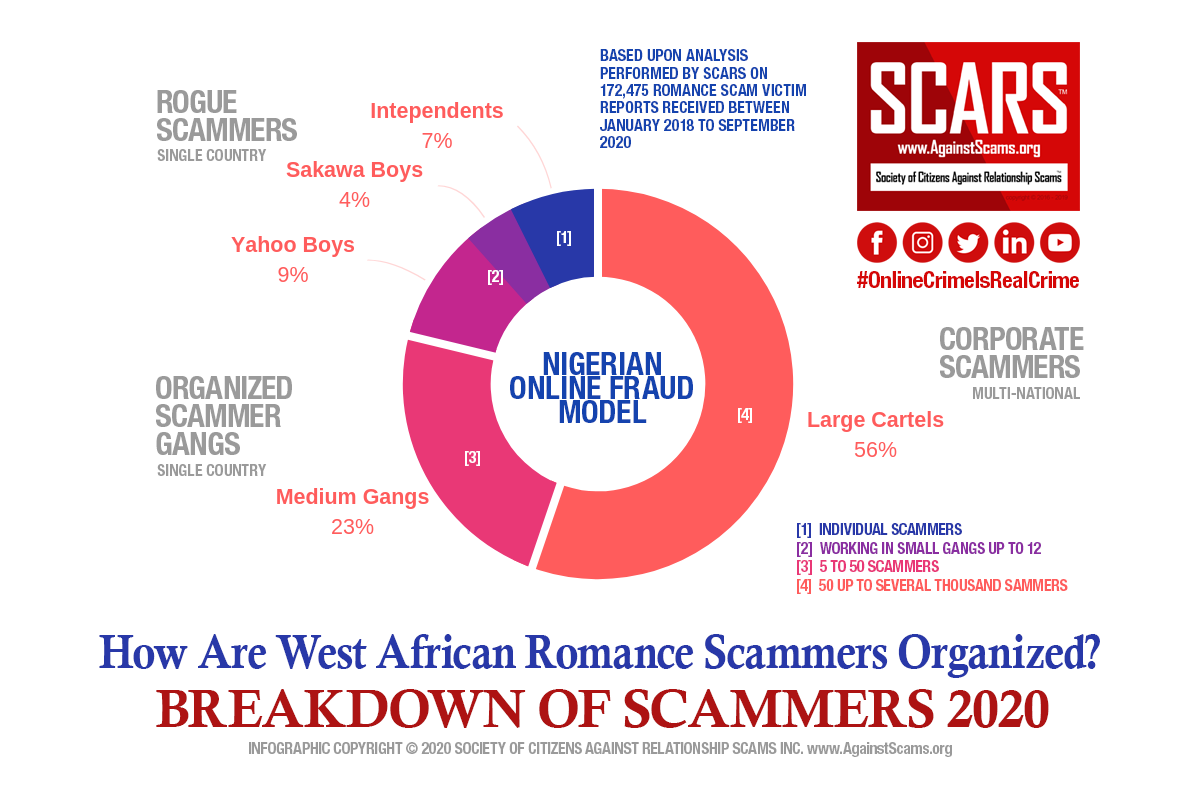 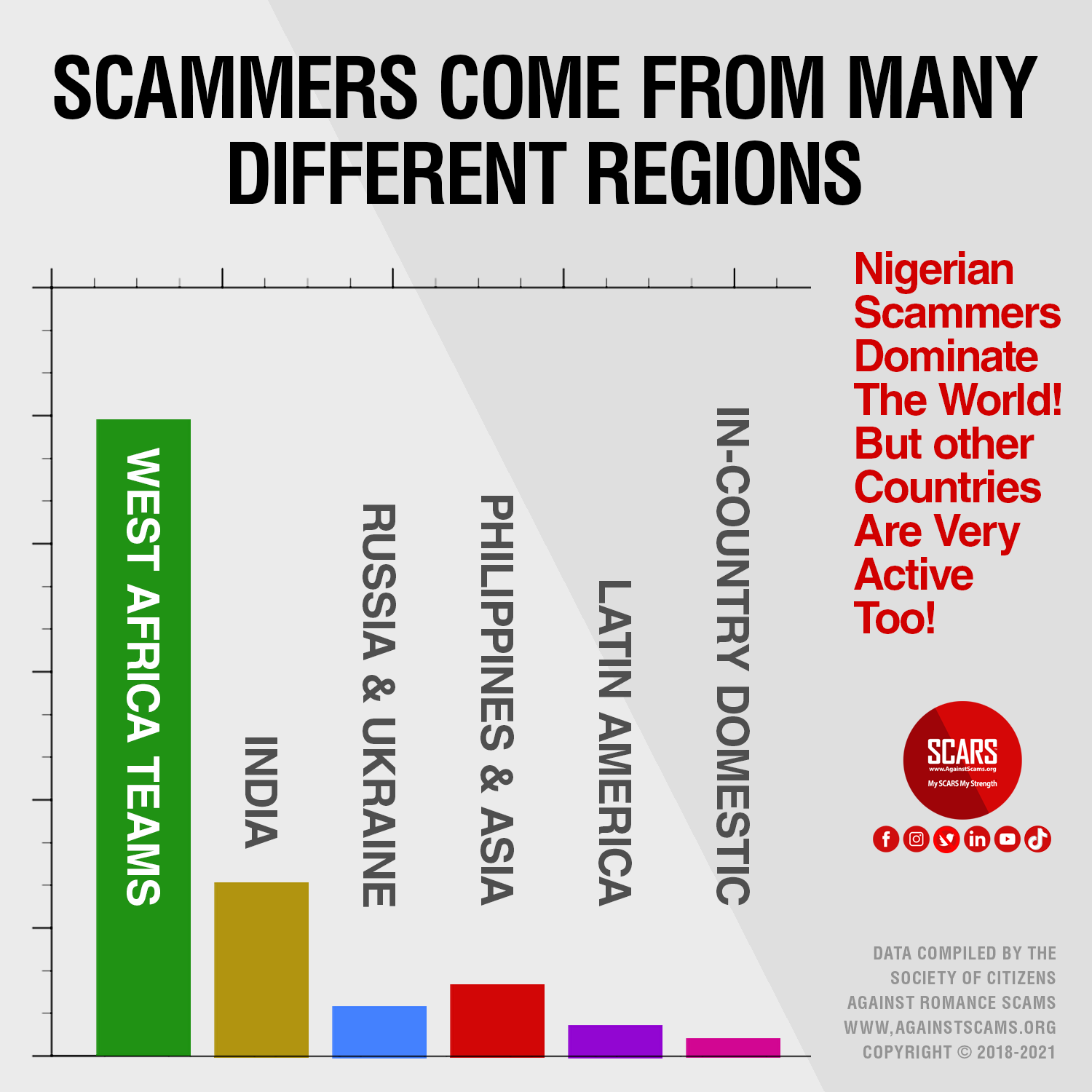 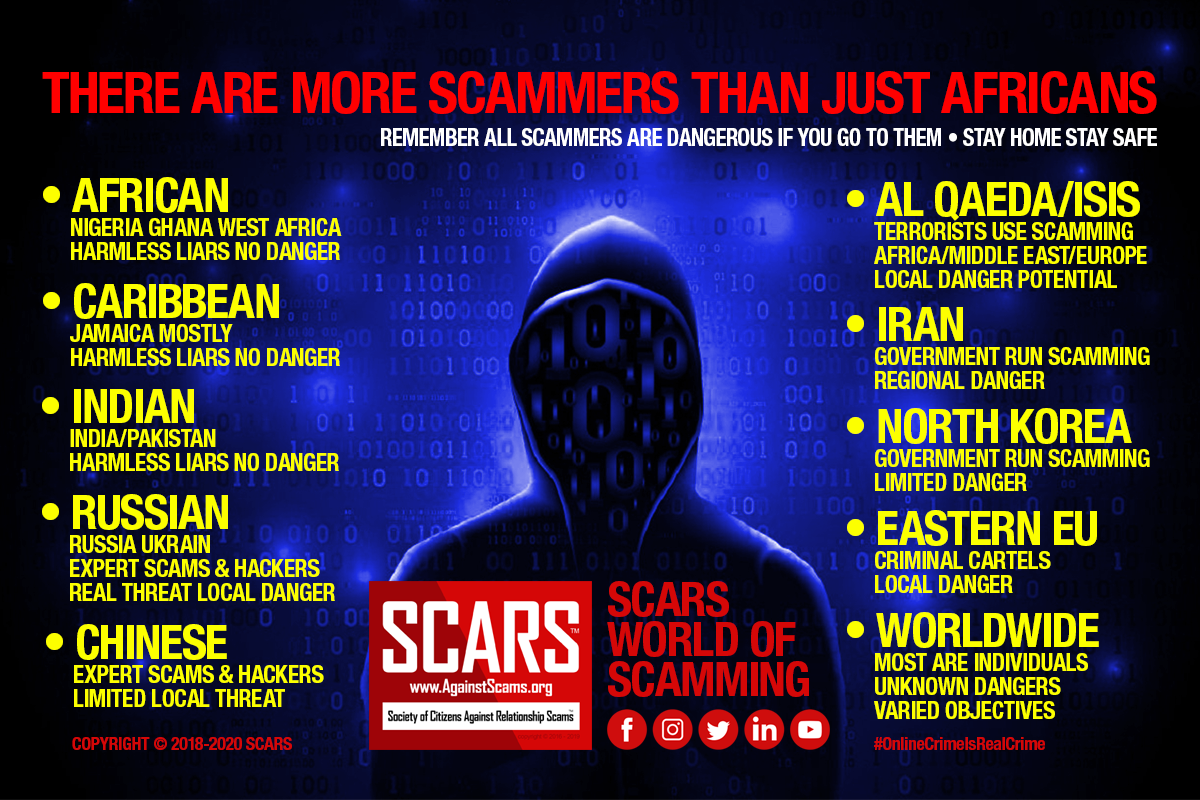