A New Romance ScamScam A Scam is a confidence trick - a crime -  is an attempt to defraud a person or group after first gaining their trust through deception. Scams or confidence tricks exploit victims using their credulity, naïveté, compassion, vanity, irresponsibility, or greed and exploiting that. Researchers have defined confidence tricks as "a distinctive species of fraudulent conduct ... intending to further voluntary exchanges that are not mutually beneficial", as they "benefit con operators ('con men' - criminals) at the expense of their victims (the 'marks')". A scam is a crime even if no money was lost. – Fake Psychologists & Therapists!

Scammers recognize that scam victims are traumatized and now want to capitalize on that!

SCAM WARNING: No real psychologist or other mental healthMental health Mental health, defined by the World Health Organization (WHO), is "a state of well-being in which the individual realizes his or her own abilities, can cope with the normal stresses of life, can work productively and fruitfully, and is able to make a contribution to his or her community". According to WHO, mental health includes "subjective well-being, perceived self-efficacy, autonomy, competence, intergenerational dependence, and self-actualization of one's intellectual and emotional potential, among others". From the perspectives of positive psychology or of holism, mental health may include an individual's ability to enjoy life and to create a balance between life activities and efforts to achieve psychological resilience. Cultural differences, subjective assessments, and competing professional theories all affect how one defines "mental health". professional is going to contact you unsolicited on social media or by phone!

As SCARSSCARS SCARS - Society of Citizens Against Relationship Scams Inc. A government registered crime victims' assistance & crime prevention nonprofit organization based in Miami, Florida, U.S.A. SCARS supports the victims of scams worldwide and through its partners in more than 60 countries around the world. Incorporated in 2015, its team has 30 years of continuous experience educating and supporting scam victims. Visit www.AgainstScams.org to learn more about SCARS. continues to focus on the wellbeing and emotional care of scam victims, the scammers have seen an opportunity!

A BBC article spells out the problem:

Mental health and scamsScams A Scam is a confidence trick - a crime -  is an attempt to defraud a person or group after first gaining their trust through deception. Scams or confidence tricks exploit victims using their credulity, naïveté, compassion, vanity, irresponsibility, or greed and exploiting that. Researchers have defined confidence tricks as "a distinctive species of fraudulent conduct ... intending to further voluntary exchanges that are not mutually beneficial", as they "benefit con operators ('con men' - criminals) at the expense of their victims (the 'marks')". A scam is a crime even if no money was lost.: ‘I’d have paid anything to make me feel better’

Emma Quinn was at her most vulnerable when a so-called psychologist contacted her on Facebook offering to help.

As someone with bi-polar disorder, the 28-year-old was in a manic phase when a woman offered support.

“At that point I would have paid anyone any sum of money to make me feel better,” she said.

That sum turned out to be £6,000 and it would take Emma two years – and a great deal of stress – to get the money back.

Now a charity is calling on the government to protect people like Emma, claiming its plans to legislate on online safety ignores the scourge of scams.

The Money and Mental Health Policy Institute said its research suggested people with mental health problems were three times more likely to have been victim of an online scam than the wider population.

Emma faced the financial impact of such a scam after she was pressurised into handing over thousands of pounds she did not have.

After being given a 24-hour deadline by the supposed psychologist, she borrowed £3,500 from a friend, telling them it was for rent even though

Emma was living at her parents’ home.

“When I’m manic I can find money anywhere,” she said.

She also used £1,500 when her credit card limit increased automatically and then paid a further £1,000.

“It was actually my dad who had seen my PayPal account I’d left logged in on his laptop by accident one day and he said “who on earth is this woman?’, I couldn’t really explain it and he said to immediately stop this ‘It isn’t right, you’re not well’.”

It caused a temporary rift, but he was correct, and after receiving medical help, she recognised she had been taken advantage of.

Following a period of depression and pursuit through legal channels, she managed to get £5,000 back, but said the whole episode had been very stressful.

“This was done on Facebook and I definitely think they could have done more because I did contact them at one point to say ‘this is what has happened, could I archive the conversation?’ and it didn’t really go anywhere,” she said.

“She had blocked me and it wouldn’t let me recover her side of the conversation.”

She said manic episodes left her and others open to financial exploitation, and supported calls to allow people to opt outOpt Out Withdrawing permission for an organization to use information in a specific way. of messages about credit on websites.

A survey by the Money and Mental Health Policy Institute found suggested that people with mental health problems were twice as likely than others to say that easy access to credit online led them to spend more than they could afford.

They were also twice as likely to feel under pressure to spend when online.

This, according to the institute, should be reflected in the government’s Online Safety Bill.

Martin Lewis, founder of the charity, as well as the Moneysavingexpert website, said: “I simply don’t understand how an Online Safety Bill can simply exclude the epidemic of scams the UK faces. Scams don’t just steal people’s money, it often takes their self-respect and mental health too.

“The government has promised to set world-beating standards for online safety, but as it stands the Online Safety Bill will utterly fail to protect people from the growing threat posed by online scammers, especially to vulnerable people.”

A government spokeswoman said: “We recognise the concerns about the growth in scale and complexity of online scams and fraudFraud In law, fraud is intentional deception to secure unfair or unlawful gain (money or other assets), or to deprive a victim of a legal right. Fraud can violate civil law (e.g., a fraud victim may sue the fraud perpetrator to avoid the fraud or recover monetary compensation) or criminal law (e.g., a fraud perpetrator may be prosecuted and imprisoned by governmental authorities), or it may cause no loss of money, property, or legal right but still be an element of another civil or criminal wrong. The purpose of fraud may be monetary gain or other benefits, for example by obtaining a passport, travel document, or driver's license, or mortgage fraud, where the perpetrator may attempt to qualify for a mortgage by way of false statements. A fraud can also be a hoax, which is a distinct concept that involves deliberate deception without the intention of gain or of materially damaging or depriving a victim., and we continue to work closely with industry, regulators and law enforcement partners to pursue fraudsters, close down the vulnerabilities they exploit and make sure people have the information they need to spot and report scams.”

We have seen all manner of “professionals” reach out and contact online crime victims, these include:

In all of these cases, no real professional would reach out this way without some form of prior contact and authorization or request.

If anyone tries to contact you and you have not asked for their help, by definition this is not legit – it is a scam. Of course, we do not mean advertisements, we mean contacting you via:

If anything like this happens, simply disregard it and report it to the Federal Trade Commission at www.FTC.gov/complaint 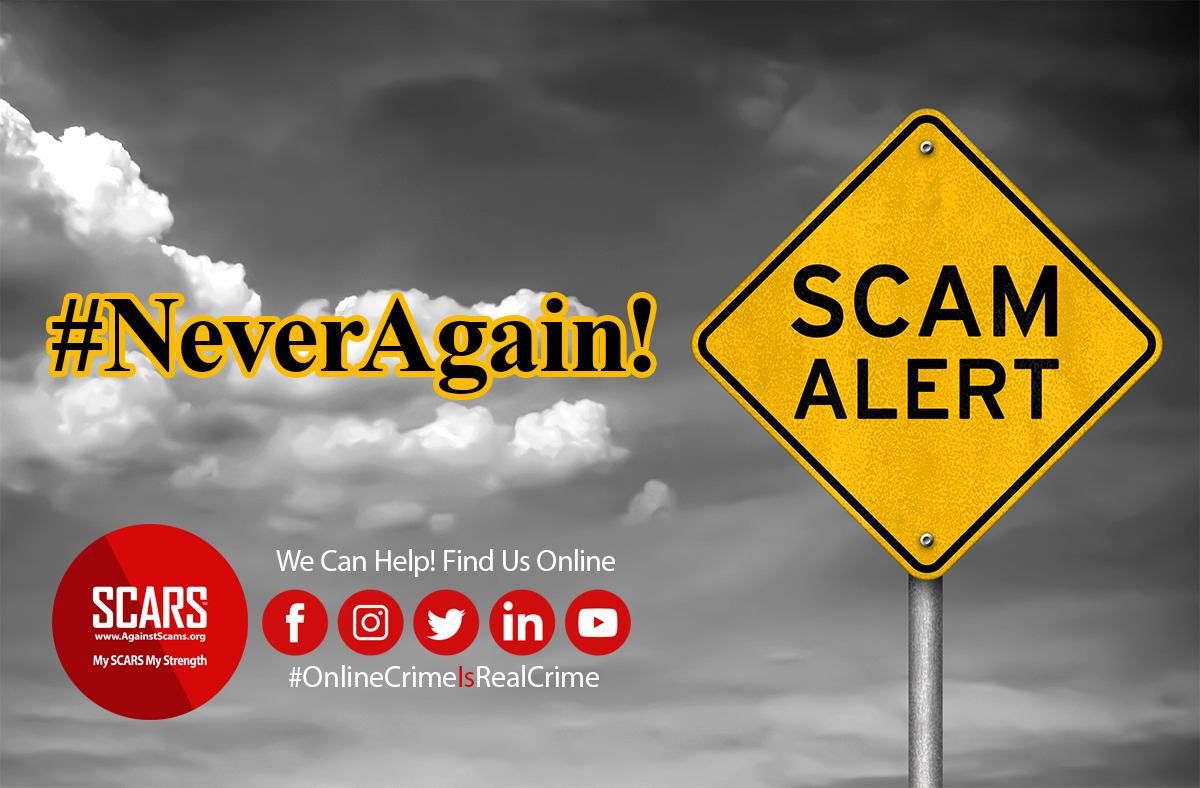 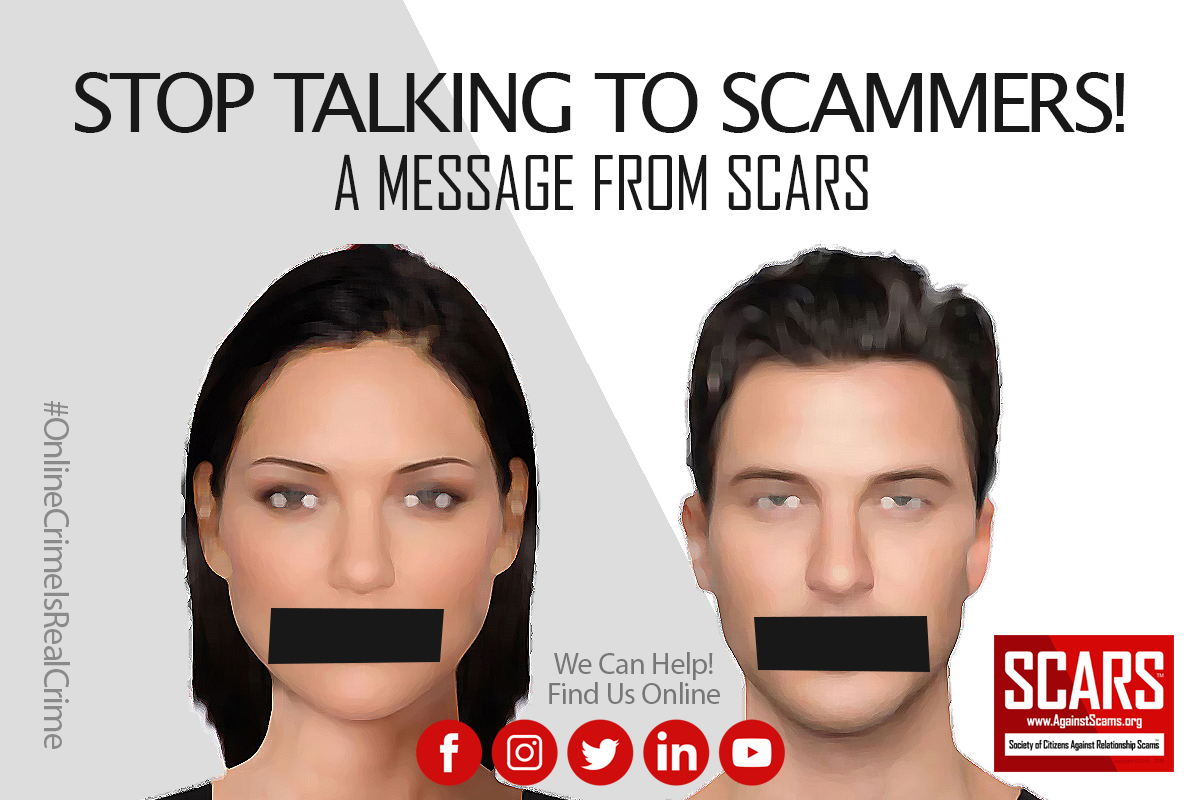 This Information Is Provided For Educational Purposes Only

RomanceScamsNOW.com (the website and its content) is not intended to be a substitute for professional advice, diagnosis, medical treatment, medication, or therapy. Always seek the advice of your physician or qualified mental health provider with any questions you may have regarding any mental health symptom or medical condition. SCARS is not authorized to make recommendations about medication or serve as a substitute for professional healthcare advice. Never disregard professional psychological or medical advice or delay in seeking professional advice or treatment because of something you have read on RomanceScamsNOW.com.