What Are You Thinking?

Home/What Are You Thinking?
Previous Next

What Are You Thinking?2 min read

Never Go To Visit Someone You Only Met Online!

You Might Go In A Suitcase and Come Back In A Casket!

If you are going to meet someone, have them come to you!

NEVER TRY TO GO AFTER YOUR MONEY

ODDS ARE VERY HIGH YOU WILL NOT COME BACK

Many victims think that they can go to West Africa to recover their money. This is just another foolish fantasy on top of another bad decision.

The fact is that the number of “tourist” deaths in these countries are some of the highest in the world. Local police have no incentive to keep you safe, and corruption means that is easy for the police to be part of the risk.

BUT WHO DO YOU THINK SCAMMERS ARE?

Astoundingly, most victims believe that scammers are lazy shiftless individuals. Nothing could be further from the truth. Regardless of what you see in photos, scammers are mostly part of gangs. These gangs can have a handful of members or thousands. These are true organized criminals with the police (many times) in their pocket. Worse still is that at least 30% are actively financing and supporting ISIS or Al Qaeda Terrorists.

THIS IS WHO YOU ARE GOING TO CONFRONT!

Here is a map of the most dangerous places on Earth for foreign travelers. So ask yourself: You were stupid once, are you being stupid again? Very likely. Stay home and stay safe. 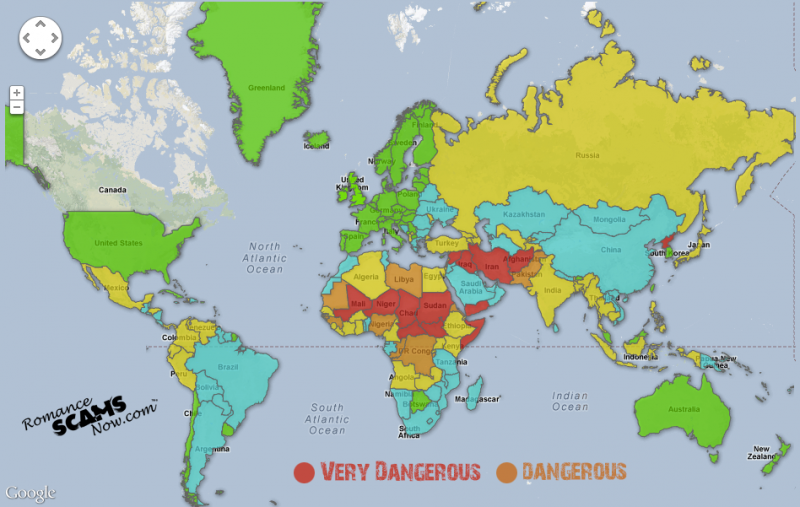 Romance Scams Avoidance Education & Scam Victims' Assistance & Support Organization at SCARS|RSN™ Romance Scams Now™ is a division of the Society of Citizens Against Relationship Scams™ [SCARS]
SCARS|RSN™ RomanceScamsNow.com™ is the official knowledge and victims' support publication of the Society of Citizens Against Relationship Scams™ Incorporated [SCARS]™ It is edited and published by the SCARS. SCARS is the world's leading anti-scam charitable nonprofit nongovernmental organization, based in Miami Florida U.S.A. Its founder has been involved in combating online fraud since 1991. SCARS™ - the Society of Citizens Against Relationship Scams Inc. is a charitable nonprofit nongovernmental organization (NGO) dedicated to advocating victim's causes and changing government and law enforcement attitudes toward online fraud for good! Please join us in becoming a member of SCARS - it's free! Add your voice so that the world will listen at last - just go to www.AgainstScams.org. The SCARS|RSN website and all of our publications (including social media) are maintained by our own staff employees and volunteers to provide you the most up to date information about scams & scammers from around the world. We show you how to avoid them or recover from them. SCARS is the only registered online crime victims' assistance & support organization in the world. Be sure to report scammers here. Also, visit our main Facebook page for more information about romance scams.