The panic can come from several directions:

All of these are real fears that most victims experience.

But With Fear Comes Anger & Rage

Anger is the natural emotion created in a fight-or-flight situation by the mind in a threatening situation – such as the discovery of being scammed.

When a scam victim senses the threat or danger following the discovery of the scam the mind generates fear and anger.

The fear is part of a flight response. Anger is the emotional energy a victim generates for the fight against that perceived threat.

Confusing For A Victim

Emotions like anger are natural and real.  Even if the threat is imagined the anger that is created is just as real and powerful.

However, the reasons a victim generates anger aren’t always real.

If the victim isn’t aware of how their mind is dealing with these imagined scenarios of hurt, threat or danger then their anger will appear irrational.

It can sometimes be difficult to distinguish a real threat from an imagined threat because they can happen at the same time.

For example, someone is cutting you off on the freeway and a car briefly maneuvers in a way that could cause an accident and possibly injure your body.  There’s a natural fight-or-flight reaction to your emotions and you create a combination of fear and anger. The reality of this harm usually passes very quickly and so do your emotions – though not always depending on the person. Some people experience a kind of shock afterward.

However, the imagination may take over and create worse scenarios of whatever the trauma of the experience was.  The mind begins to consider all manner of worst-case scenarios that spiral upward and create ever greater stress.

The mind might recall similar events from the person’s past (powered by the Amygdala), projecting those into the mind uncontrollably, and add more emotional stress in the process.  After the real physical threat (the scam and the aftermath) passes the mind still projects scenarios in the imagination. The emotions then respond to those imagined scenarios with feelings of fear and the resulting anger.

Even later the mind will replay the event over and over, and the person’s emotions respond to the imagined vision.

The problem is that the imagined scenarios in the mind are out of control – in a kind of escalating spiral – and no longer are based in reality.

Then add outside triggers, such as a comment or action from another and this can lead to a complete rage that is then directed against an innocent person because they became a perceived threat.

Awareness Of These Emotions

Victims are generally not aware of how their imagination is projecting these scenarios and will blame other people unnecessarily for their emotions. Understanding how the mind creates images and scenarios of imagined outcomes is critical to understanding the anger and other emotions.

The initial moment of fear and anger resulted from a very real scenario that could have caused you harm – meaning the scam.  However, most often the anger and fear people generate are sourced from their uncontrolled beliefs and imagination.

This fear and anger also drive irrational expectations in others. Victims frequently demand unrealistic performance of law enforcement and those attempting to assist them. These perceptions are driven by the victim’s own emotions and are not based upon the way the world really works or even the capabilities to those receiving their outbursts.

A perfect example of this is anger towards local police because they will not drop everything and get on a plane to go to Nigeria and arrest a scammer. The fear-driven anger blinds the victim to the real-world limitations and then causes further anger by the failure of the provider to do what the victim demands.

Such anger fueled irrational expectations are directed at anyone that does not do what the victim demands and expects. This not only alienates and isolates the victim but drives away anyone that is in a position to assist – both with the scam itself and with the victims own emotional recovery.

Anger is the natural emotional response designed to protect us from danger.

It is part of everyone’s instinctual system for protection and preservation.

Examples of this are everywhere in nature, such as when an animal growls and bares its teeth in response to a threat to its territory.  A mother bear will switch into ferocious anger if someone were to come near her cubs.

Anger is a force of energy that people also project in order to push away or combat a threat.  However, anger ceases to be a form of protecting life and becomes a means of destroying life and relationships when the threat isn’t real.

Each person’s emotions typically respond the same whether a threat is real or imagined.

Anger itself is a completely rational emotion to have when there is awareness of threat scenarios in the mind. There is nothing mechanically wrong with the anger from imagined scenarios and beliefs – because the mind is capable of extrapolating threats from minimal information. The mind’s emotional response system is working properly in these cases.

The problem is with the thoughts, beliefs, and imagined scenarios themselves – when there is no real basis for them and that generate an irrational anger response.  The scenarios the mind projects in these cases are not rational at all.

Problems are created when the person does not have the necessary awareness or will power to refrain from outbursts of anger.

These reactions and consequences often distract us from the root cause of the problem. It’s easy to assume that anger is the problem because it is what is noticed.  It is the outbursts of anger that are seen and that cause the destruction.

A person may want to stop their anger, but anger is just a reaction to something else. Anger is the natural emotional reaction to what the mind and imagination are doing. If the person is not aware of this process, then they will simply let the anger loose on anyone in their way.

Changing The Perception Of Threat

The way to overcome anger is to try to understand the root cause and alter the perception of threat.

To reduce and eliminate the anger it is necessary to shift the perception that the mind has imagined. This is where the recovery process is important and can play a large role in shifting perceptions and expectations, but the person or scam victim has to be willing to embrace the process or it will fail.

For anger (rage, hate, etc.) to happen the emotional pain doesn’t even have to occur. If the victim just remembers it that is sufficient, or imagines that there will be hurt in the future (such as financial pain) the person can become angry before anything has actually happened.

In a romance scam scenario, there are numerous opportunities for post-scam blame.

The victim feels shame or fear from the financial loss, or there can be threats from the scammer or just baseless fear from sharing so much about themselves with a fraudulent stranger. These are irrational perceptions of danger. They all trigger blame.

At that point, because the victim is under these fear and anger stressors any external actions that go contrary to what the victim perceives or believes should happen will result in immediate blame – either self-blame or against others as a means of avoiding their own involvement.

It is very typical for romance scam victims to blame a large array of people following the scam:

Of course, no one does anything or understands anything. This is something that victims’ assistance and support providers hear a thousand times a day. This is the misplaced blame speaking.

These judgments are really an avoidance of self-judgment that attack the victim’s self-image.  These self-criticisms result in hurtful emotional pain. One of the possible reactions to this type of emotional pain is to create anger to push away the cause.

Typically the victim is not aware of how their mind creates the self-judgment and emotional harm and they will simply blame others.  It is common that the hurt feelings translate from perceptions of disrespect or insult from others further triggering greater levels of anger. The mind draws a simple relationship between anyone’s action as the cause and the pain as the effect.

Without awareness, the victim overlooks or simply does not see the emotionally damaging self-judgment that their mind has created and only notices the triggering behavior of others. Thus directing anger at anyone to punish them for their behavior – real or imagined.

Not only does this damage necessary relationships that the victim needs to survive the experience and recover, but it does not address the real cause of the pain – which is the underlying trauma experienced from the scam.

Anger In A Vacuum

Without self-awareness, the scam victim is likely to misconstrue the cause of their pain.

Victims make the assumption that someone else’s behavior or possible behavior is hurtful them and threatening them emotionally.  The result is anger, rage, and even hate.

When a victim becomes angry at other victims, police, or support professional based upon interactions depending on the situation and the victim’s assumptions, the anger can easily explode. The victim is unable to properly conclude that their mind is generating threatening scenarios and reacting irrationally.  This dynamic of irrational reactions can completely destroy their critical relationships and either stall their emotional recovery or result in potential mental health issues that may require professional counseling or therapy to correct.

Every victim will feel fear, and there will come anger. After all, this is a grieving process.

However, the important point is to have enough self-awareness to see that the cause of the pain lies in the internalized trauma from the scam, and their own imagination or beliefs about themselves and their situation. As awareness gains traction each victim can address their core beliefs behind their pain and change to overcome the real cause of the fear and resultant anger.

It is the realists that successfully recover from the trauma of a scam. Those that remain trapped in denial caused by their fear, or those exploding in anger cannot make the connections so necessary to recover, much less possess the self-awareness needed to work through their internal pain. 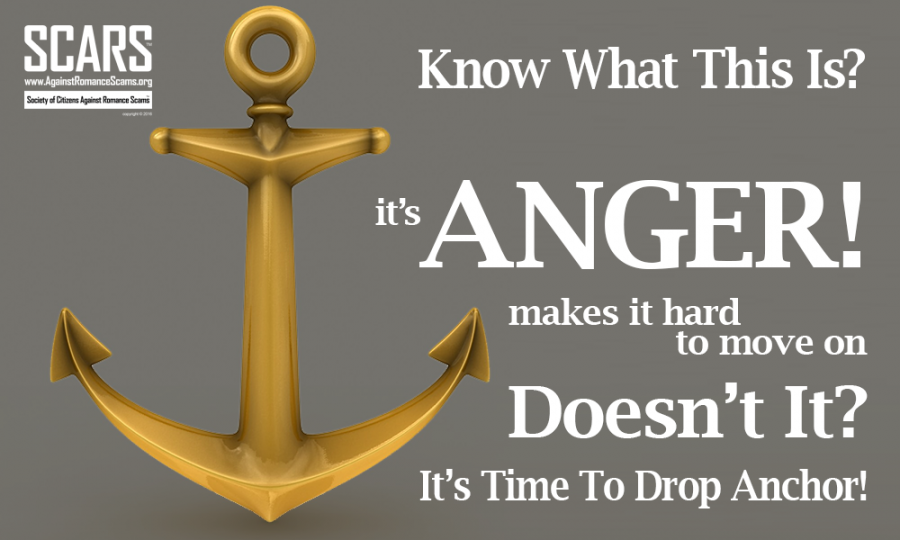