If Someone You Don’t Know Sends You A Check And Asks For Money Back, That’s A Scam

Fake checks drive many types of scams — like those involving phony job and income opportunities, online classified ad sales, and others. In a fake check scam, a person you don’t know asks you to deposit a check – sometimes for several thousand dollars and usually for more than you are owed — and send some of the money back, often by wire transfers or gift cards, to them or another person. The scammers always have a good story to explain the overpayment. They might say they’re stuck out of the country, they need you to cover taxes or fees, you’ll need to buy supplies, or something else.

By law, banks have to make deposited funds available quickly — you’ll usually see the money in your account within a day or two. But it may take weeks for your bank to learn the check was bad. By that time, the scammer has the money you sent, and you’re stuck paying the bank back.

Over the last several years, the number of fake check scams reported to the FTC has steadily increased, and so have the dollars lost. In its most recent Data Spotlight, Don’t bank on a “cleared” check, the FTC reports that consumers lost more than $28 million to fake check scams in 2019 alone. The median loss reported was $1,988. That’s more than six times the median loss on all frauds tracked by the FTC. What’s more, reports about fake check scams are up by about 65% over 2015 levels. The FTC found that younger people are hit especially hard. In 2019, people in their twenties were more than twice as likely as people 30 and older to report losing money to a fake check scam.

How to Spot, Avoid and Report Fake Check Scams

In a fake check scam, a person you don’t know asks you to deposit a check— sometimes for several thousand dollars, and usually for more than you are owed — and send some of the money to another person. The scammers always have a good story to explain why you can’t keep all the money. They might say they need you to cover taxes or fees, you’ll need to buy supplies, or something else.

Fake checks come in many forms. They might look like a business or personal checks, cashier’s checks, money orders, or a check delivered electronically. Here’s what you need to know about fake check scams.

Fake checks are used in many types of scams. Here are some examples:

Why Do These Scams Work?

These scams work because fake checks generally look just like real checks, even to bank employees. They are often printed with the names and addresses of legitimate financial institutions. They may even be real checks written on bank accounts that belong to identity theft victims. It can take weeks for a bank to figure out that the check is a fake.

Fake Checks and Your Bank

By law, banks have to make deposited funds available quickly, usually within two days. When the funds are made available in your account, the bank may say the check has “cleared,” but that doesn’t mean it’s a good check. Fake checks can take weeks to be discovered and untangled. By that time, the scammer has any money you sent, and you’re stuck paying the money back to the bank.

Your best bet: Don’t rely on money from a check unless you know and trust the person you’re dealing with.

How to Avoid a Fake Check Scam

DON’T BANK ON A “CLEARED” CHECK

Fake check scams take advantage of what we don’t know about how banks handle check deposits. Scammers do know, and they trick people into sending them money before the bank spots the fake. The FTC’s Consumer Sentinel Network database shows that people reported more than 27,000 fake check scams in 2019, with reported losses topping $28 million dollars. And the data suggest that fake check scams disproportionately harm young adults – especially people in their twenties.

Scammers have various fake check storylines, and job and income opportunities top the list. Last year, about 50% of people who reported a fake check scam to the FTC said they were offered a job or some other way to earn money. Nearly half of those were fake mystery shopping jobs, and many others were phony car-wrap advertising opportunities. In another 18% of the reports, people said they got a fake check as payment for something they were selling online.

Fake check scams have two telltale elements – a check to deposit and a plausible explanation for why you can’t keep all the money. The checks come in many varieties: a business or personal check, a cashier’s check, money order, or even a check delivered electronically. The ploys to get you to send back some of the money also vary. Potential mystery shoppers are told to use some of the money to “evaluate” a retailer by buying gift cards or money orders, or by wiring money through MoneyGram or Western Union. (The scammers make sure to get the gift card PIN number from you, or delay you from canceling the money order.) People who apply online and are hired as “personal assistants” are told to use the money to buy gift cards for the new boss (and, again, to give up those PIN numbers). People interested in car wrap advertising are told to send money to supposed decal installers – who never materialize. People buying something from you online “accidentally” send a check for too much and ask you to refund the balance. 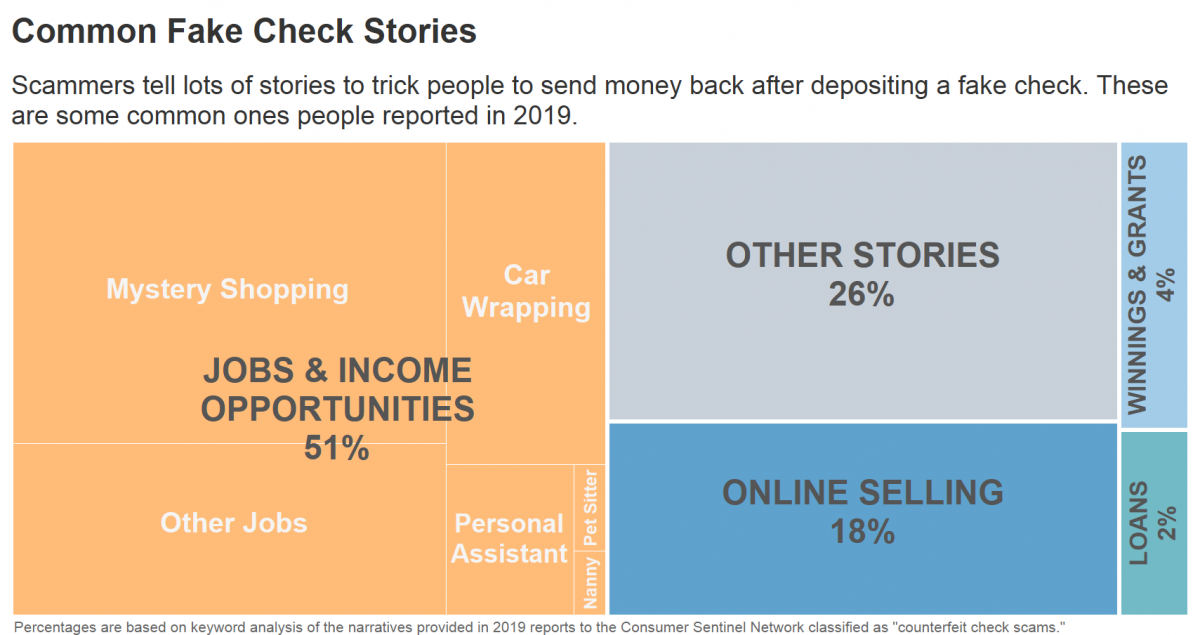 These scams work because, once you deposit a check, you quickly see the funds in your account. Parting with some of that money then feels risk-free. But scammers know that while the law says banks have to make funds from deposited checks available within a day or two, it can take weeks to uncover a fake. Some scammers even tell you to wait for the check to “clear” before sending money. When it ultimately bounces, the bank can take back the amount of the fake check, leaving you on the hook for the money.

Say you deposited a check for $1,000 and sent $600. A while later, the bank finds out the check was fake. It withdraws the full $1,000 from your account. Now, you’re out $600. If you didn’t have money in your account to cover that loss, you also have a negative balance.

The number of reports made directly to the FTC about fake checks are on the rise – they’re up by about 65% over 2015 levels. What’s more, no other fraud among last year’s top ten most frequently reported scams came close to the individual losses people reported on fake check scam last year. The median individual loss reported on fake checks was $1,988, compared to $320 on all fraud types combined. And people reported that the scammers often asked to be paid by gift card or wire transfer. Con artists favor these payment methods because once the money is sent, it is almost impossible to trace or reverse.

Younger people are hit especially hard. Last year, people in their twenties were more than twice as likely as people 30 and older to report losing money on a fake check scam.5 Many college students have reported that the scam started with a message sent to their student email address. Scammers make these emails seem official – they may even impersonate the school’s career services office.

What to Do If You Sent Money to a Scammer

Gift cards are for gifts, not payments. Anyone who demands payment by gift card is always a scammer. If you paid a scammer with a gift card, tell the company that issued the card right away. When you contact the company, tell them the gift card was used in a scam. Ask them if they can refund your money. If you act quickly enough, the company might be able to get your money back. Also, tell the store where you bought the gift card as soon as possible.

Here is a list of gift cards that scammers often use — with information to help report a scam. If the card you used is not on this list, you might find the gift card company’s contact information on the card itself, or you might need to do some research online.

If you wired money to a scammer, call the money transfer company immediately to report the fraud and file a complaint. You can reach the complaint department of MoneyGram at 1-800-MONEYGRAM (1-800-666-3947) or Western Union at 1-800-325-6000. Ask for the money transfer to be reversed. It’s unlikely to happen, but it’s important to ask.

If you paid a scammer with a money order, contact the company that issued the money order right away to see if you can stop payment. Also, try to stop delivery of the money order: if you sent it by U.S. mail, contact the U.S. Postal Inspection Service at 877-876-2455. Otherwise, contact whatever delivery service you used as soon as possible.

Where to Report Fraud

If you think you’ve been targeted by a fake check scam, report it to: