RSN™ ScamScam A Scam is a confidence trick - a crime -  is an attempt to defraud a person or group after first gaining their trust through deception. Scams or confidence tricks exploit victims using their credulity, naïveté, compassion, vanity, irresponsibility, or greed and exploiting that. Researchers have defined confidence tricks as "a distinctive species of fraudulent conduct ... intending to further voluntary exchanges that are not mutually beneficial", as they "benefit con operators ('con men' - criminals) at the expense of their victims (the 'marks')". A scam is a crime even if no money was lost. News: Nigerian Scammers Arrested In Malaysia

Two Nigerian Men Arrested & Charged For FraudFraud In law, fraud is intentional deception to secure unfair or unlawful gain (money or other assets), or to deprive a victim of a legal right. Fraud can violate civil law (e.g., a fraud victim may sue the fraud perpetrator to avoid the fraud or recover monetary compensation) or criminal law (e.g., a fraud perpetrator may be prosecuted and imprisoned by governmental authorities), or it may cause no loss of money, property, or legal right but still be an element of another civil or criminal wrong. The purpose of fraud may be monetary gain or other benefits, for example by obtaining a passport, travel document, or driver's license, or mortgage fraud, where the perpetrator may attempt to qualify for a mortgage by way of false statements. A fraud can also be a hoax, which is a distinct concept that involves deliberate deception without the intention of gain or of materially damaging or depriving a victim. In Malaysia

The two Nigerians are believed to be the masterminds of a Macau Scam Syndicate – meaning they engaged in “Macau-Style Scams) were arrested. They were charged at the Malaysian Magistrate’s court with criminalCriminal A criminal is any person who through a decision or act engages in a crime. This can be complicated, as many people break laws unknowingly, however, in our context, it is a person who makes a decision to engage in unlawful acts or to place themselves with others who do this. A criminal always has the ability to decide not to break the law, or if they initially engage in crime to stop doing it, but instead continues. conspiracy. 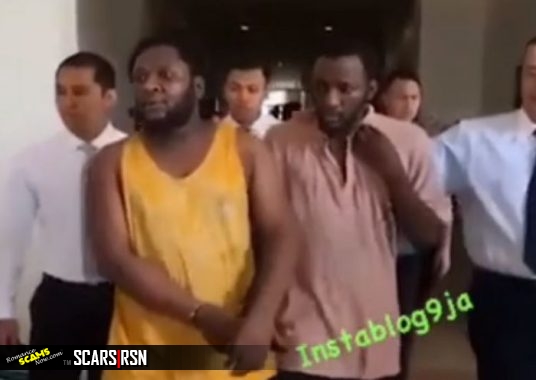 Their charge carries a maximum penalty of five years’ jail term and a fine for each count. The accused pleaded not guilty to the charges read before magistrate Nurunaim Abdullah.

They were denied bail and November 23 has been fixed for mention and appointment of counsel. The duo, who were studying at a private university, entered the country in 2016 on student visas. However, it is more likely that they were working for a Nigerian ScammerScammer A Scammer or Fraudster is someone that engages in deception to obtain money or achieve another objective. They are criminals that attempt to deceive a victim into sending more or performing some other activity that benefits the scammer. CartelCartel A scamming cartel is any criminal organization with the intention of engaging in larger-scale financial fraud operations. They range from loosely managed agreements among various scammer gangs to formalized commercial enterprises. The term was applied when the largest scammer gangs organizations reached a size and scope of a major enterprise, including control of corrupt politicians and local officials. In truth, most scammer cartels do not exactly meet the definition of a cartel, but the term stuck and it is now popularly used to refer to any large criminal fraud organization. to engage in money launderingMoney laundering Money laundering is the illegal process of concealing the origins of money obtained illegally by passing it through a complex sequence of banking transfers or commercial transactions. Money laundering can be done through various mediums, leveraging a variety of payment vehicles, people and institutions. through Malaysian banks.