RSN™ ScamScam A Scam is a confidence trick - a crime -  is an attempt to defraud a person or group after first gaining their trust through deception. Scams or confidence tricks exploit victims using their credulity, naïveté, compassion, vanity, irresponsibility, or greed and exploiting that. Researchers have defined confidence tricks as "a distinctive species of fraudulent conduct ... intending to further voluntary exchanges that are not mutually beneficial", as they "benefit con operators ('con men' - criminals) at the expense of their victims (the 'marks')". A scam is a crime even if no money was lost. News: Nigerian Police Make Major Arrest Of 24 University-Based Scammers

EFCCEFCC Economic and Financial Crimes Commission The Economic and Financial Crimes Commission (EFCC) is a Nigerian law enforcement agency that investigates financial crimes such as advance fee fraud (419 fraud), scams, and money laundering. The EFCC was established in 2003, partially in response to pressure from the Financial Action Task Force on Money Laundering (FATF), which named Nigeria as one of 23 countries non-cooperative in the international community's efforts to fight money laundering. The agency has its head office in Abuja, Nigeria. Arrests 24 Undergraduates & Others Over Cyber Crime

The Nigerian EFCC issued a statement in Abuja (the Nigerian capital) that:

Orilade stated that the suspects, who were between 19 and 37 years of age, included 23 university students, out of which, nine were ladies who allegedly claimed to be girlfriends and or neighbors of some of the suspects. 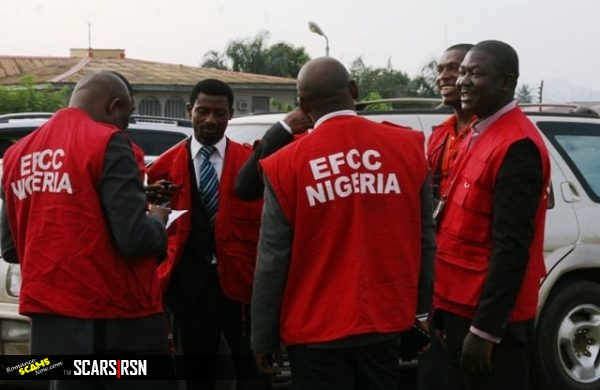 The EFCC added that one of the suspects was from another university, while 12 others were not students.

EFCC was alerted to their activities through intelligence reports alleging that the suspected fraudsters were obtaining money by false pretext.

Tony Orilade, the Commission’s acting Head for Media and Publicity said: “The suspects carry out their activities by sending emails to unsuspecting victims mostly in the United States of America, while others were engaged in romance scam on several dating sites.”

“At the point of arrest, EFCC operatives recovered over 300 SIM cards from them.”

Orilade said other items recovered from the suspects included different models and brands of exotic cars, 18 laptops, nine being of Apple brand, 50 cell phone, including 21 iPhones and two bags of fetish objects.

The media and publicity acting head said that the suspects would be charged to court after investigation.