Find Real ScammerScammer A Scammer or Fraudster is someone that engages in deception to obtain money or achieve another objective. They are criminals that attempt to deceive a victim into sending more or performing some other activity that benefits the scammer. & Fake Stolen Photos On ScamsONLINE.org
The SCARSSCARS SCARS - Society of Citizens Against Relationship Scams Inc. A government registered crime victims' assistance & crime prevention nonprofit organization based in Miami, Florida, U.S.A. SCARS supports the victims of scams worldwide and through its partners in more than 60 countries around the world. Incorporated in 2015, its team has 30 years of continuous experience educating and supporting scam victims. Visit www.AgainstScams.org to learn more about SCARS. Scammer Photo Gallery Website
Click Here To Donate To SCARS

Europe Continues The Global Crackdown On Money MulesMoney mules Money mules are a type of money laundering where a person transfers illicit funds through a medium (such as a bank account) to obfuscate where the money came from. There are different types of money mules including witting, unwitting, and complicit.

Mules are the lifeline for transnational criminalCriminal A criminal is any person who through a decision or act engages in a crime. This can be complicated, as many people break laws unknowingly, however, in our context, it is a person who makes a decision to engage in unlawful acts or to place themselves with others who do this. A criminal always has the ability to decide not to break the law, or if they initially engage in crime to stop doing it, but instead continues. enterprise

422 Arrested And 4,031 Money Mules Identified In Global Crackdown On Money LaunderingMoney laundering Money laundering is the illegal process of concealing the origins of money obtained illegally by passing it through a complex sequence of banking transfers or commercial transactions. Money laundering can be done through various mediums, leveraging a variety of payment vehicles, people and institutions.

In Europe this year, law enforcement authorities from 26 countries and EuropolEuropol The European Union Agency for Law Enforcement Cooperation, better known under the name Europol, formerly the European Police Office and Europol Drugs Unit, is the law enforcement agency of the European Union (EU) formed in 1998 to handle criminal intelligence and combat serious international organized crime and terrorism through cooperation between competent authorities of EU member states. The Agency has no executive powers, and its officials are not entitled to arrest suspects or act without prior approval from authorities in the member states. Based in The Hague, it comprised 1,065 staff as of 2016. WEBSITE LINK announced the results of the European Money MuleMoney Mule A money mule sometimes called a "smurfer," is a person who transfers money acquired illegally (e.g., stolen) in person, through a courier service, or electronically, on behalf of others (usually criminals that they are knowingly or unknowingly affiliated). Typically, the mule is paid for services with a small part of the money transferred - but not always. Mules may or may not be aware that they are performing these actions. Money mules are often dupes recruited online for what they think is legitimate employment, not aware that the money they are transferring is the product of crime. The money is transferred from the mule's account to the scam operator, typically in another country. Similar techniques are used to transfer illegal merchandise. Mules can be prosecuted for numerous crimes. Action ‘EMMA 6’, a worldwide operation against money mule schemes.

Between September and November 2020, EMMA 6 was carried out for the sixth consecutive year with the support of the European Banking Federation (EBF), FinTech FinCrime Exchange, INTERPOL, and Western Union. As a result, 4 031 money mules were identified alongside 227 money mule recruiters, and 422 individuals were arrested worldwide.

During the span of the operation, 1 529 criminal investigations were initiated. With the support of the private sector including more than 500 banks and financial institutions, 4 942 fraudulent money mule transactions were identified, preventing a total loss estimated at €33.5 million.

DON’T BECOME A LINK IN THE MONEY LAUNDERING CHAIN

Money mules are individuals who, often unwittingly, have been recruited by criminal organizations as money laundering agents to hide the origin of ill-gotten money. Unaware that they are engaging in criminal activities, and tricked by the promise of easy money, mules transfer stolen funds between accounts, often in different countries, on behalf of others. In exchange, they receive a commission for their services.

While mules are recruited via numerous routes such as direct contact or through email, criminals are more and more turning to social media to recruit new accomplices, through the advertisement of fake jobs offers (e.g. ‘money transfer agents’), online pop-up adsPop-up Ads Pop-up ads (also known as pop-ups) - Unsolicited advertising that appears as a "pop-up" window on a computer screen. Sometimes these can be created to look like a financial institution's request for personal information. and instant messaging applicationsApplications Applications or Apps An application (software), commonly referred to as an ‘app’ is a program on a computer, tablet, mobile phone or device. Apps are designed for specific tasks, including checking the weather, accessing the internet, looking at photos, playing media, mobile banking, etc. Many apps can access the internet if needed and can be downloaded (used) either for a price or for free. Apps are a major point of vulnerability on all devices. Some are designed to be malicious, such as logging keystrokes or activity, and others can even transport malware. Always be careful about any app you are thinking about installing.. Although some COVID-19 related cases have been reported, payment process compromise and romance scamsScams A Scam is a confidence trick - a crime -  is an attempt to defraud a person or group after first gaining their trust through deception. Scams or confidence tricks exploit victims using their credulity, naïveté, compassion, vanity, irresponsibility, or greed and exploiting that. Researchers have defined confidence tricks as "a distinctive species of fraudulent conduct ... intending to further voluntary exchanges that are not mutually beneficial", as they "benefit con operators ('con men' - criminals) at the expense of their victims (the 'marks')". A scam is a crime even if no money was lost. continue to be the most recurrent schemes. The use of cryptocurrencies by money mules is also on the rise.

Europol and EU law enforcement authorities together with international partners and financial institutions will launch the #DontBeaMule campaign to raise awareness among the public on the risks of money mule schemes.

The campaign, promoted internationally by competent authorities, will aim to inform the public about how criminals operate, how they can protect themselves and what to do if they become involved.

What do you risk as a money mule? 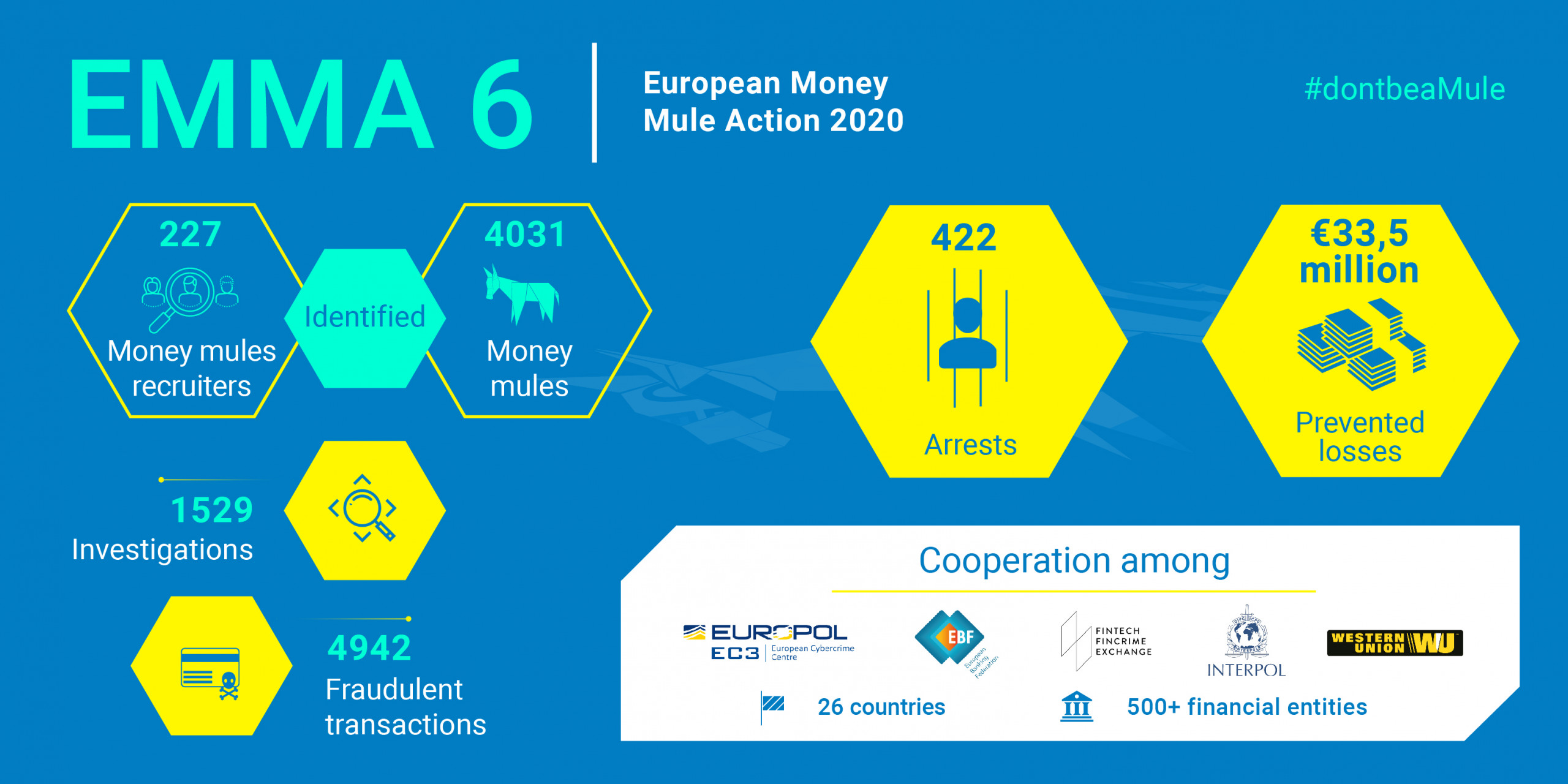