As we have reported before, the U.S. Government is beginning to crack down on scam victims that are converted into money mules. This is especially true if they are in such profound denial that they refuse to stop once told by the police to end it. This is just the latest example of an elderly scam victim that supported Nigerian scammers and exploited other scam victims. 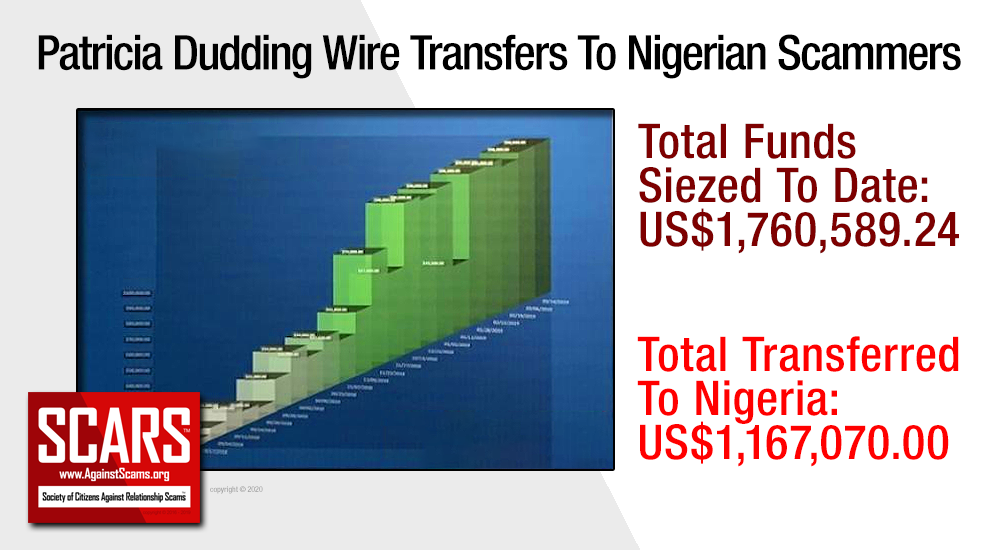 CHARLESTON, West Virginia — United States Attorney Mike Stuart announced that a federal grand jury has indicted a Huntington woman in connection with laundering funds from an international fraud scheme that scammed money from individuals, many of whom were elderly, in several states and foreign countries.

A twelve count indictment was returned against Patricia Dudding, 68, of Huntington, charging her with conspiracy to commit money laundering, bank fraud and unlawful money transactions.  The indictment alleges that Dudding acted as a money mule for a Nigerian scammer.  According to the indictment, Dudding met “Lucas” online in the early spring of 2018, and although they never actually met in person, Dudding and Lucas communicated frequently by email and text messages.   The indictment alleges that Dudding set up numerous bank accounts in her name at over 10 different banks and that she would use these bank accounts to wire and receive fraudulent funds.  Dudding received numerous deposits in those bank accounts from more than two dozen individuals located in the United States and abroad.  She, and unnamed co-conspirators, would then transfer these funds to bank accounts located in Nigeria. To further the scheme, Dudding admittedly would make false and fraudulent representations to the financial institutions to make it appear that the wire transfers were being sent for legitimate purposes.

“Egregious. This is the largest elder fraud scheme ever prosecuted in the history of West Virginia and our work continues.  This case is significant on a national and international level,” said United States Attorney Mike Stuart. “Elder fraud is an important priority for Attorney General Barr and me.  Elder fraud is a diabolical crime that preys on the vulnerabilities of some of the most vulnerable among us. By all outward appearances, Mrs. Dudding was just an ordinary neighbor but, instead, the indictment alleges she was what we call a “money mule” actively engaged in facilitating a money laundering scheme that left many, many victims in its wake. The stories of the victims are tragic. Our goal is to hold those responsible accountable and to do our best to make victims of these despicable crimes whole. This investigation is on-going.”

“The exploitation of both a vulnerable population as well as our financial systems is a particular evil,” said U.S. Secret Service Charleston Resident Agent in Charge Wade Fleming. “These criminals may not hide behind false identities and fraudulent accounts, and our skilled investigators will continue to pursue and bring these malicious actors before our justice system.”

Money mules play critical roles in the commission and facilitation of fraudulent schemes including elder fraud.  A money mule is someone who transfers illegally acquired money on behalf of or at the direction of another party. Criminal enterprises recruit what is referred to as a “mule” to move money electronically through bank accounts, move physical currency, or assist in the movement of money through a variety of other methods. Money mules are inherently dangerous, as they add layers to the money trail from a victim to a criminal and launder money illegally to aid a criminal actor.

The indictment alleges that Dudding used over $100,000 of victim funds for her personal benefit over the course of the scheme.  Dudding used those funds to pay her utility bills, satellite television service, groceries, drug store purchases, gasoline purchases, department store purchases, restaurants and took numerous cash withdrawals.  Her total cash withdrawals amounted to nearly $42,000.  The total loss contributed to the fraudulent scheme is $3.2 million.  Over $3 million was transferred or deposited into Dudding’s accounts during the scheme and she attempted to transfer over $1.6 million to Nigeria during this period.

During the course of the investigation, warrants were issued for the seizure of nearly $1.9 million related to the alleged scheme.  The indictment seeks forfeiture of those funds.

“Elder fraud and financial fraud are complex frauds.   I want to commend the excellent, detailed work of the Secret Service, the FDIC-OIG and the South Charleston Police Department, and my team, including AUSA Robeson and my remarkable investigators, Steve Rowley and Tony Hussion.  This was a team effort and I’m proud of their work,” continued Stuart.

If convicted on all counts, Dudding faces up to 20 years in prison.  The investigation is ongoing and could result in additional federal and state charges in the future.

Since President Trump signed the bipartisan Elder Abuse Prevention and Prosecution Act (EAPPA) into law, the Department of Justice has participated in hundreds of enforcement actions in criminal and civil cases that targeted or disproportionately affected seniors.  In particular, in March 2019, the department announced the largest elder fraud enforcement action in American history, charging more than 260 defendants in a nationwide elder fraud sweep.  The department has likewise conducted hundreds of trainings and outreach sessions across the country since the passage of the Act.

More information about the department’s efforts to help American seniors is available at its Elder Justice Initiative webpage.  Elder fraud complaints may be filed with the FTC at www.ftccomplaintassistant.gov or at 877-FTC-HELP.  The Department of Justice provides a variety of resources relating to elder fraud victimization through its Office for Victims of Crime, which can be reached at https://www.ovc.gov.

Please Note:  An indictment is merely an allegation and the defendant is presumed innocent unless and until proven guilty beyond a reasonable doubt in a court of law.