The Term “CATFISH” – Is An Insult To Romance Scams Victims

The Term “CATFISH” – Is An Insult To Romance Scams Victims

The Term “CATFISHCatfish Catfishing, as it is commonly used, is a descriptive term for an activity where a person creates a fictional persona or fake identity on a social networking or dating service, usually targeting a specific kind of victim. The practice may be used for financial gain, to compromise a victim in some way, as a way to intentionally upset a victim, or for wish-fulfillment (as it was originally coined).  The term is now considered a derogatory term as it was originally coined to describe scams by women against men,” – Is An Insult To Romance ScamsScams A Scam is a confidence trick - a crime -  is an attempt to defraud a person or group after first gaining their trust through deception. Scams or confidence tricks exploit victims using their credulity, naïveté, compassion, vanity, irresponsibility, or greed and exploiting that. Researchers have defined confidence tricks as "a distinctive species of fraudulent conduct ... intending to further voluntary exchanges that are not mutually beneficial", as they "benefit con operators ('con men' - criminals) at the expense of their victims (the 'marks')". A scam is a crime even if no money was lost. Victims

It Is Actually A Derogatory Term Against Women

We have often been asked why we do not use the term Catfish?

The term “Catfish” is an insult to the victims of this crime!
It makes it sound cute and clever.
It is psychological TORTURE!

There are many times when political correctness goes too far. But at other times it makes us think about what we say and the terms we use.

Think for a moment about the genesis of words

According to Wikipedia, the origin of the term ‘Catfishing,’ a slang term for creating fake profiles on social media to create false identities, has its origins (according to them) in the 2010 movie ‘Catfish,’ a pseudo-documentary that chronicled a young man’s online friendship with a woman that turned out to be very different from her Facebook profile.

While this confirms a male origination and that women catfish men, we believe the term goes back to the early 2000s.

According to dating industry insiders, the term originated around 2000 as a derogatory term for women that altered their attributes on dating websites such as Match, and other sites. It used “cat” as a slang term for women who were fishing for mates or partners by falsifying their information or using photos stolen from other people. This also relates to the fact that real catfish are far from attractive fish. It ignored the fact that men also do exactly the same thing, so there is no exclusivity on the gender of fakes online.

Thus overall, it seems to have originated in a deliberately derogatory, sexist or gender-specific, and even body shaming desire to condemn the women that engaged in this practice.

Another oblique reference to the term comes from the parable of the catfish that has been given a less world-historical slant by American Christians. Pastor Charles Swindoll used it in his 1988 book Come Before Winter and Share My Hope to offer personal spiritual guidance. “Each one of us is in a tank of particular and inescapable circumstances,” Swindoll writes. “It is painful enough to stay in the tank. But in addition to our situation, there are God-appointed ‘catfish’ to bring sufficient tension that keeps us alive, alert, fresh, and growing.” Swindoll’s version has been widely disseminated since then, perhaps most notably appearing in a 2007 book by the influential pastor Joel Osteen. An assistant to Swindoll told Slate that he first encountered the story in a 1983 article in the now out-of-print Fullness Magazine. Ths the catfish are sent to test us?

All in all, SCARSSCARS SCARS - Society of Citizens Against Relationship Scams Inc. A government registered crime victims' assistance & crime prevention nonprofit organization based in Miami, Florida, U.S.A. SCARS supports the victims of scams worldwide and through its partners in more than 60 countries around the world. Incorporated in 2015, its team has 30 years of continuous experience educating and supporting scam victims. Visit www.AgainstScams.org to learn more about SCARS. feels that the term is a derogatory term and has no place in the rational discussions of cyber-enabled crimeCyber-enabled Crime A Cyber-enabled crime is one where technology facilitates a criminal to commit a crime against an individual or a business. These are where there is a one to one relationship between the criminal and the victim. Romance scams, email fraud, and many other types of scams are considered cyber-enabled crimes. The technology used can be the Internet, a computer, a phone, or other devices. because of its probable sexist origin and because of its imprecise-cliched overuse. It is for that reason that we have stopped using it and have banned it from our future publications.

Unfortunately, because it is a common term, we are forced to use it in certain contexts, bother for search SEO purposes, and to help victims better understand these scams. You will still see some articles on our site with that term, but we will remove them as we revise our articles over time.

For those that continue to use it prominently and provide evidence of their lack of sensitivity and generally amateurish approach to these serious problems, we suggest that they rethink their use of terms.

We believe that the important issue is that we all take a look at the terms we use and do a better job of understanding their impact on others. 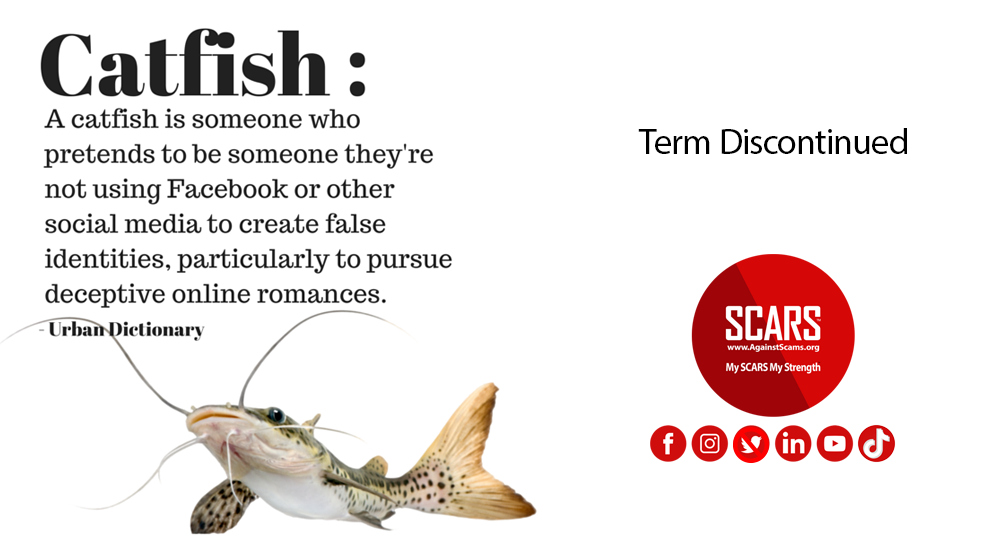 More Words We Prefer Not To Use:

Each of these describes a scamScam A Scam is a confidence trick - a crime -  is an attempt to defraud a person or group after first gaining their trust through deception. Scams or confidence tricks exploit victims using their credulity, naïveté, compassion, vanity, irresponsibility, or greed and exploiting that. Researchers have defined confidence tricks as "a distinctive species of fraudulent conduct ... intending to further voluntary exchanges that are not mutually beneficial", as they "benefit con operators ('con men' - criminals) at the expense of their victims (the 'marks')". A scam is a crime even if no money was lost., but each of them also has a connotation of foolishness or carelessness or blameBlame Blame or Blaming is the act of censuring, holding responsible, making negative statements about an individual or group that their action or actions are socially or morally irresponsible, the opposite of praise. When someone is morally responsible for doing something wrong, their action is blameworthy. By contrast, when someone is morally responsible for doing something right, we may say that his or her action is praiseworthy. Blame imparts responsibility for an action or act, as in that they made a choice to perform that act or action. built into their use. They also tend to make light of the criminalCriminal A criminal is any person who through a decision or act engages in a crime. This can be complicated, as many people break laws unknowingly, however, in our context, it is a person who makes a decision to engage in unlawful acts or to place themselves with others who do this. A criminal always has the ability to decide not to break the law, or if they initially engage in crime to stop doing it, but instead continues. act they represent.

When we use slang and euphemisms it diminishes the real impact on victims. These crimes are serious. There is nothing funny about them. They are life-changing.

It is important to think about this when we describe what has been done so that others do not mistake a slang term to indicate it does not matter or that there was no pain.

The same is true in every language. Think about the terms you use and make sure you communicate precisely about scams!

TAGS: SCARS, Information About Scams, Romance Scams, Scam Victims, Fake People, Online FraudFraud In law, fraud is intentional deception to secure unfair or unlawful gain (money or other assets), or to deprive a victim of a legal right. Fraud can violate civil law (e.g., a fraud victim may sue the fraud perpetrator to avoid the fraud or recover monetary compensation) or criminal law (e.g., a fraud perpetrator may be prosecuted and imprisoned by governmental authorities), or it may cause no loss of money, property, or legal right but still be an element of another civil or criminal wrong. The purpose of fraud may be monetary gain or other benefits, for example by obtaining a passport, travel document, or driver's license, or mortgage fraud, where the perpetrator may attempt to qualify for a mortgage by way of false statements. A fraud can also be a hoax, which is a distinct concept that involves deliberate deception without the intention of gain or of materially damaging or depriving a victim., Fake Profiles, Online Crime Is Real Crime, Scam Avoidance, People Who Deceive Online, Catfish, Catfished, Derogatory Terms, Insulting To Victims