They were completely convinced that the video was real, even though it is impossible. The reality is that these were recorded videos stolen and then played back during the chat!

BUT HOW IS THAT POSSIBLE?

Let Start With What Is Known

FACT #1: Scammers steal photos and videos of the real people they want to impersonate

FACT #2: [African] Scammers never reveal their real face until they run out of options and need to try a new scam approach

FACT #3: Victims are expertly manipulated into accepting the most outrageous stories spun by their scammer

FACT #4: Victims are not experts in digital forensics and would not know a pre-recorded video from live if they are set up with the proper story

The typical situation is that a scammer sets up a scam. It can be a business related scam or an emergency. All center around the basics of a romance that the scammer has expertly manipulated the victim into believing.

The victim simply wants to spend more time with the object of their online relationship and requests a face to face video chat to see the person of their affection (fake as it is – but the victim does not yet know this).

The victim Makes The Request

At this stage one of two things will happen:

Obviously, if the scammer makes excuses when they do not have a recorded video or do not have the software to fake a video call. The scammer will claim any number of reasons why a video call is not possible. This is the ultimate red flag and all victims should stop the scam right there.

But some will be able to do it, and the victim needs to understand what to do in these cases.

REMEMBER TO NEVER CONFRONT A SCAMMER OR ADMIT THAT YOU KNOW IT IS A SCAM. LEARN MORE HERE »

In many cases, the scammers are fully capable of faking a video chat.

The people that they steal photos from are usually public figures, and not only have photos available but also recorded videos. Even normal people get impersonated using the photos and videos they upload unto their personal Facebook profiles.

There are countless apps online to steal (copy & download) videos. The scammers simply use these to pull a video from someone that suits their needs.

They will edit out anything that may show them as a fake and also to limit the length of the call – since the longer the call the more likely the victim is to suspect it is all a fake.

The call is made and the connection established.

In most cases the scammer will claim their microphone is not working, so they display the video but communicate via text.

But in other cases, they have stripped the audio off of the video, and instead will use their real voices as the pre-recorded video plays.

There is one exception for this, and that is that the scammer obtained a recorded video that was originally intended for a loved one and can be used for their purpose, but these are rare.

Of course, the spoken words never sync with what is on the screen, but there is always an excuse for that.

Even in real video chats or video conferences synchronization is rarely perfect. Sometimes it is wildly off. The scammers know this is something that most people would accept.

So they explain it as slow internet connections, of Skype’s fault, etc. The victim sees a person talking on screen and hears words coming out of the speakers. That is enough for most victims.

Most victims are happy to see and hear from the object of their relationship and accept all manner of “technical glitches.” Except none of it is real.

Some of these faked video calls are extremely good. After all, scammers have huge amounts of money and can afford serious kit.

How Can A Fake Be Detected?

Spotting a fake is actually simple.

All any victim really has to do is accept that it might be a fake and look for obvious discrepancies in what is seen from what is heard. They are always there!

However, if a concrete proof is required just perform a couple of simple tests.

When a person uses the word “ZOO” the shape of the mouth is unmistakable – say it and note the shape of your own mouth at the end – everyone does it the same. Do it in front of your mirror so you can see it as it would appear on screen.

Then during the video call, the victim simply gets the scammer to use that word and look for it to appear on the screen. It never will.

Try a simple question: “Tell me about your local ZOO?”  They scammer will reply with something – some answer – that contains the word (don’t worry, this site blocks all off Africa and the Middle East so we don’t teach scammers new tricks.)

Now you have proof.

The proof of life test is very simple and can be done in many different ways. All the victim is trying to do is see something that confirms the current time or date, or gets a visual response to something specific that occurs during the call. Obviously, a scammer using a recorded video is not able to do that.

Using their smartphone: most of the time the video chat is done on their laptop (since they need to playback the stolen recorded video). So when on screen, their smartphone is available, right?

This will immediately trigger a negative response from the scammer. Because they cannot do it using a stolen video.

While the “person” is on the screen ask them to write something and show it on the screen. Of course, this is also impossible.

Alternatively ask if they have a recent newspaper, because of curiosity about what they look like where they are.

In any attempt to catch the scammer using a pre-recorded video their response will typically depend on the stage of the scam.

ANGRY SCAMMER: if the scam has reached the stage where they already have the victims money the scammer will feel free to become angry at the victim – this is both true frustrations on the scammer’s part but is also a manipulative technique to scare the victim into fearing the loss of the relationship.

HURT SCAMMER: if the scammer does not yet have any or much money from the victims the scammer will most likely play the “hurt” card. They will claim to be hurt that the victim does not trust them. They will frequently end the call at this point abruptly, as a normal person would by walking away in hurt or a pout. This is also a manipulative attempt to creat shame on the part of the victim and cause them to fear the loss of the relationship.

THE REVEAL: another possibility that some scammers use is the Big Reveal. Meaning at this point they admit it was all a scam and they really do love the victim after all. They reveal their true identity, expecting that the victim will forgive them – many do!

In the end, the techniques scammers use increases daily in their expertise and sophistication.

For now, using simple countermeasures a victim can easily detect fake stolen recorded videos, but in the not so distant future, even this will become impossible with the DeepFake » technology being perfected now.

Please remember to never talk to strangers online. Always STOP – then THINK – then decide if it is safe before CONNECTING – of course, recognize that much of the time you do not have the skill needed to know if it is safe!

General Paul Nakasone – Do You Know Him? Another Stolen Face / Stolen Identity 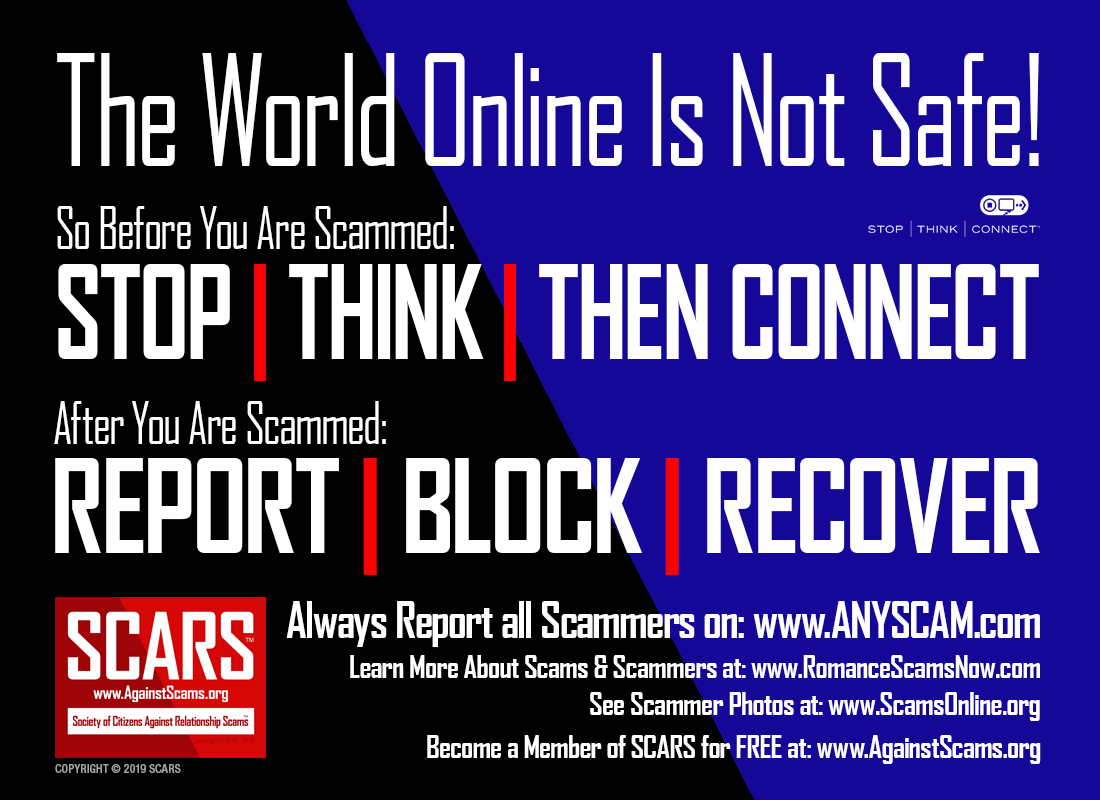