Home/SCARS™ Special Report: A Victim’s Story Of Imprisonment By A Scammer In Nigeria
Previous Next

The police said the American was confined against her wish in a hotel in Lagos by one Chukwuebuka Obiaku, a suspected fraudster that “extorted her of about $48,000”. 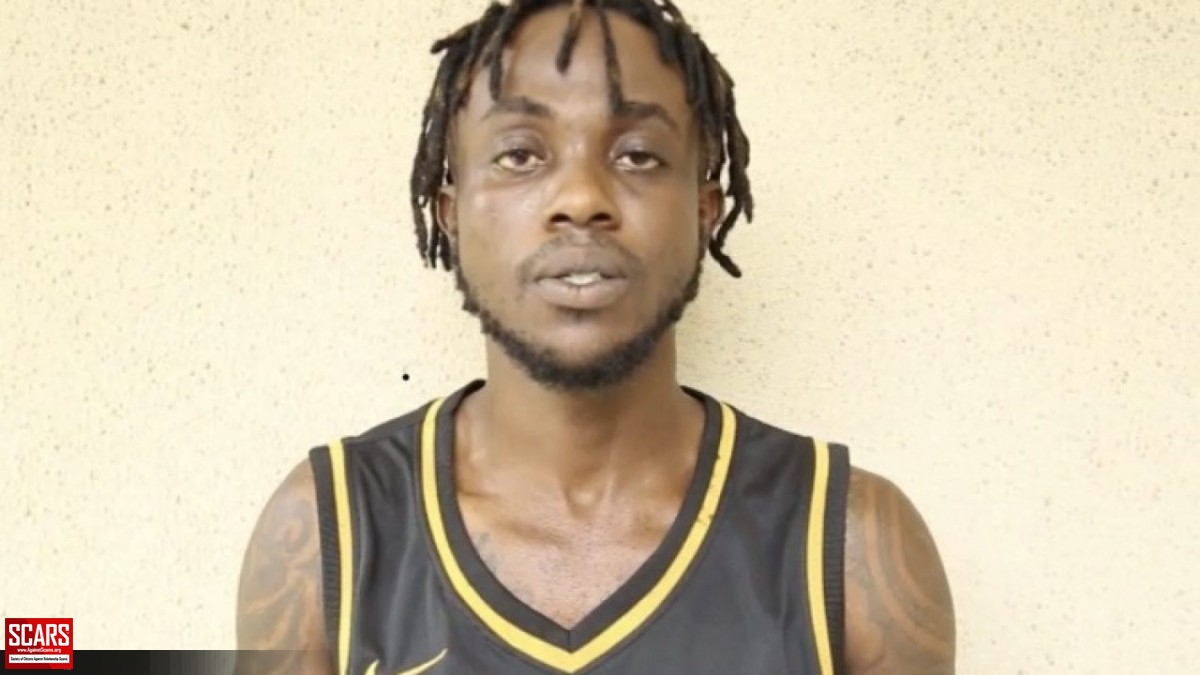 Nigerian Police officers have rescued a citizen of the United States of America who was confined to a Lagos hotel against her wish for over one year.

The victim, who came from Washington D.C. arrived in Nigeria on February 13, 2019, on a visit to 34-year-old Chukwuebuka Obiaku, a native of Ikeduru LGA of Imo State, whom she met on Facebook.

The retired civil servant victim reportedly lost about N18.5m (U.S. $48,000.00) to Obiaku, who allegedly took control of her credit and debit cards, as well as the operation of her bank accounts.

The suspect also allegedly took receipt of the American’s monthly retirement benefits and allowances for 15 months.

This is happening a few weeks after the police similarly rescued a Filipino woman, who was lured to Nigeria by her supposed lover whom she equally met on Facebook.

According to a statement on Sunday by the Force Public Relations Officer, DCP Frank Mba, investigations show that Obiaku, a graduate of Business Administration and Management, is an Internet fraudster who has defrauded many unsuspecting members of the public, both locally and internationally.

Obiaku allegedly lured the victim into the country on the pretext of love and deceitfully married her on May 15, 2019.

“He subsequently held her captive in a hotel, extorted from her money amounting to a total of $48,000. He also forcefully collected and took control of her credit and debit cards, as well as the operation of her bank accounts, including the receipt of her monthly retirement benefits and allowances over the period of 15 months,” the police said.

The statement disclosed that the suspect also used the victim as a front to defraud her associates and other foreign personalities and companies.

“Investigations reveal that the suspect, Chukwuebuka Kasi Obiaku is a graduate of Business Administration and Management and an internet fraudster who has defrauded many unsuspecting members of the public both locally and internationally.”

The unidentified victim was reportedly rescued by police operatives attached to the Intelligence Response Team, Ogun State annex, following information received from a Nigerian in the Meiran area of Lagos State.

“Chukwuebuka deliberately lured the victim into the country under the pretext of love and deceitfully married her on 15th May, 2019. He subsequently held her captive in a hotel, extorted from her monies amounting to a total of 48,000-USD.

“He also forcefully collected and took control of her credit and debit cards as well as the operation of her bank accounts including the receipt of her monthly retirement benefits and allowances over the period of fifteen (15) months.”

All from Uromi in Edo State, for cybercrime-related offenses, including advance fee fraud, money laundering and romance scam.

The suspects were arrested in Uromi following investigations into suspected fraudulent online procurement and supply of COVID-19 protective masks, received through the INTERPOL NCB Wiesbaden, Germany.

According to police investigation unit “Inegbenosun is an Internet fraudster and a member of a Turkey-based online scam syndicate” (cartel).

The police said he supplied foreign and local bank accounts to receive fraudulent funds and used the same as a conduit to other feeder accounts.

“The police have seized from him an apartment worth N20m, a Toyota RAV-4 2015 model worth N6.5m and a Toyota Matrix 2002 model valued at N2m, which he procured with the proceeds of the crime”  the Force spokesman explained in a statement.

The second suspect, Junior, was said to have returned to Nigeria from Italy in February 2020 but maintained contact with his Italian associates. Police investigations revealed that he had made over N120m from Internet fraud and other cybercrime dealings. He was found to have also received the sum of €52,000 recently from his criminal associates in Italy, as commission for his alleged involvement in an international cybercrime deal. He owns a gas filling station purchased with the proceeds of these crimes.

The police disclosed that Zakari, an expert in Internet fraud, identity theft and impersonation, falsely claimed to be a British citizen and also posed as Kelly Galk on online dating apps, which he used in carrying out romance scams and defrauding unsuspecting members of the public.

“Investigation reveals he has made millions of naira from his illicit cybercrime transactions since he joined the Turkish syndicate. All the suspects will be prosecuted in line with the Cybercrime Prevention/Prohibition Act, 2015,” Mba stated.

We Have Said It Before!

Don’t go to Africa to meet a stranger that you only met online!

This woman could easily have been killed and no one would have ever known what happened to her.

“People have to be more aware of the risks” says SCARS Chairman Dr. McGuinness. “Once you are on their turf, anything can happen, and there is no one to come and save you!”

In this case, it was chance that led the police to find and rescue this woman. Don’t be the next statistic! 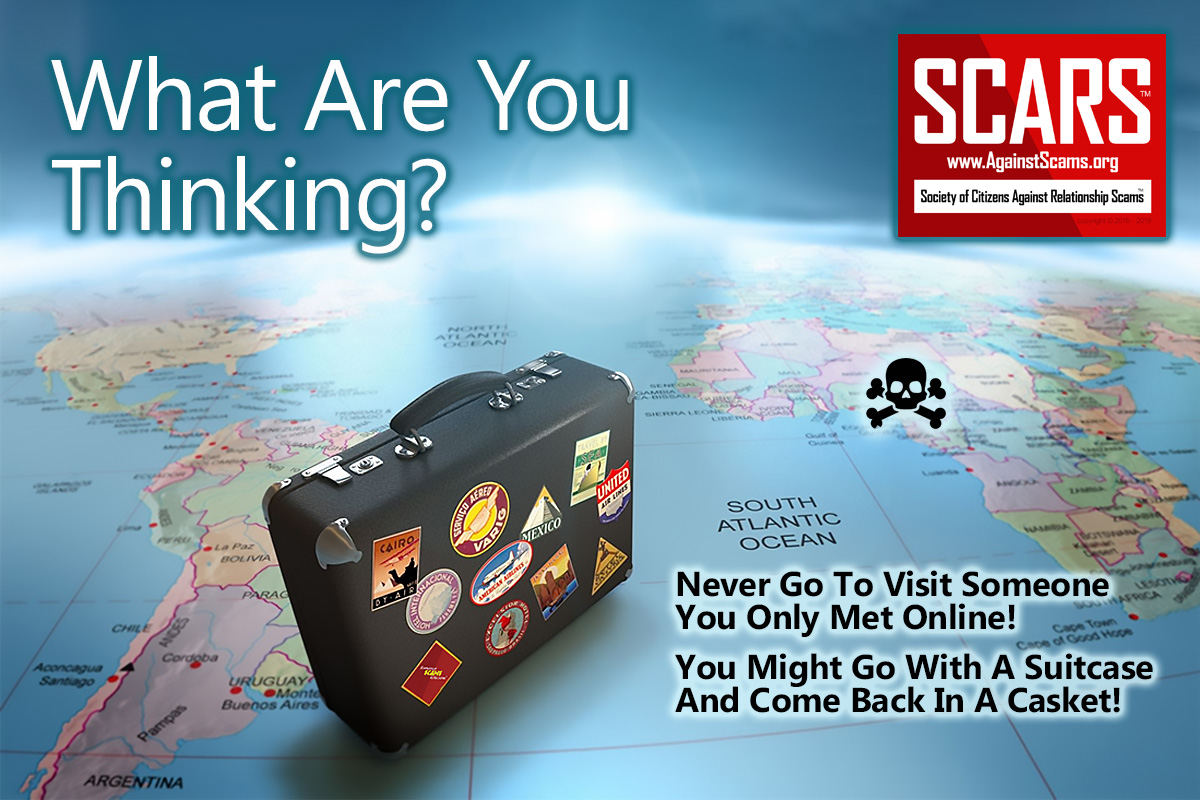