SCARSSCARS SCARS - Society of Citizens Against Relationship Scams Inc. A government registered crime victims' assistance & crime prevention nonprofit organization based in Miami, Florida, U.S.A. SCARS supports the victims of scams worldwide and through its partners in more than 60 countries around the world. Incorporated in 2015, its team has 30 years of continuous experience educating and supporting scam victims. Visit www.AgainstScams.org to learn more about SCARS.™ ScamScam A Scam is a confidence trick - a crime -  is an attempt to defraud a person or group after first gaining their trust through deception. Scams or confidence tricks exploit victims using their credulity, naïveté, compassion, vanity, irresponsibility, or greed and exploiting that. Researchers have defined confidence tricks as "a distinctive species of fraudulent conduct ... intending to further voluntary exchanges that are not mutually beneficial", as they "benefit con operators ('con men' - criminals) at the expense of their victims (the 'marks')". A scam is a crime even if no money was lost. News: Another ScammerScammer A Scammer or Fraudster is someone that engages in deception to obtain money or achieve another objective. They are criminals that attempt to deceive a victim into sending more or performing some other activity that benefits the scammer. Kingpin Arrested In India

According to one Indian News source:

The Special Investigation Team (SIT) probing the racket that duped young women and blackmailed them arrested one more person on Saturday.

The arrested was identified as Shereef, who, according to the police, was the ‘mastermind’ behind the nefarious plans of the racket. With his arrest, the number of arrests rose to seven and at least two more remain to be caught.

Apart from Shereef, the other major player of the racket was Rafeeque, who was among the four persons arrested initially, the police said. It was Rafeeque, already married and father of two, who played the role of the potential bridegroom of actor Shamna Kasim from behind the curtain that eventually led to the busting of the racket.

A TikTok video of Shereef posing before a police vehicle was shot by the fraudsters, according to police, which was later used to impress their victims about their connections. In fact, Shereef had the number of Rafeeque saved in the name of some senior police officer to further win the trust of their unsuspecting victims.

The police, however, are yet to piece together the modus operandi of the racket that had previously baited young women with acting offers. “They probably chose her as their ‘big ticket’ victim. We are probing what was their larger plan behind attempting to entice her with a marriage proposal,” said Vijay Sakhare, District Police Chief (Kochi City).

The police are learnt to have invoked serious charges in all seven FIRs, including human trafficking charges, while another two more FIRs are likely to be registered shortly.

Meanwhile, one of the victims, who tried to lodge a petition in a city station as early as in March, hinted at the involvement of more people and aired her concerns about personal safety.

It appears that is the custom in India, details of the crimes were not detailed to avoid causing shameShame Shame is an unpleasant self-conscious emotion typically associated with a negative evaluation of the self; withdrawal motivations; and feelings of distress, exposure, mistrust, powerlessness, and worthlessness. on the victims. It appears this gangGang A gang is normally a group or society of associated criminals with a defined leadership and internal organization that identifies with or claims control over a territory or business practice in a community and engages, either individually or collectively, in illegal, and possibly violent, behavior. Online gangs are not limited by territory and may operate side by side with other gangs while engaging in crime online. Some members of criminal gangs are initiated (by going through a process of initiation), or have to prove their loyalty and right to belong by committing certain acts, usually theft or violence, or rituals. Gangs are usually rougher and more visible than scammer cartels, and more often arrested. would entice young women through dating websites and then compromise them and make them submit them to blackmail.

There is no clear idea of the number of victims that this crew victimized, but some believe it is in the hundreds if not thousands. 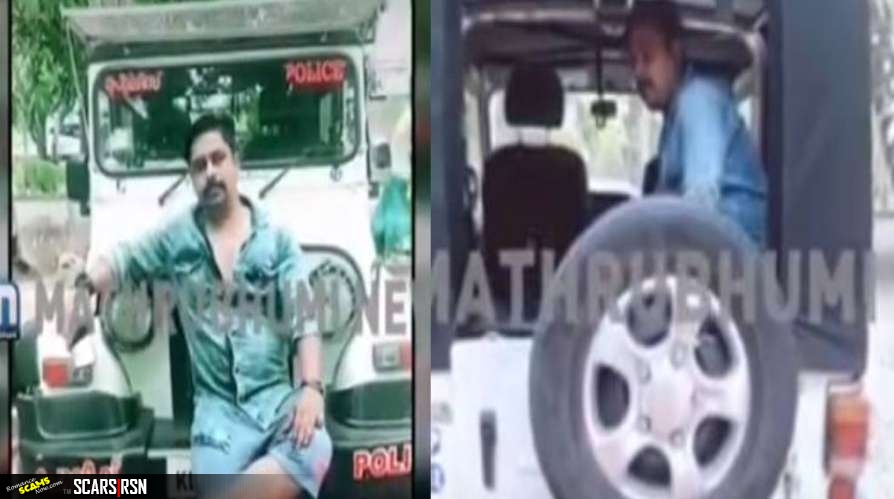 From another Indian New outlet:

The prime accused in Shamna Kasim blackmailing case, Shereef, has been arrested by the police.

Palakkad native Shereef was arrested on Saturday morning and is being questioned by the police in Kochi.

Shereef, who was hiding in Tamil Nadu, was nabbed by police while he was making plans to surrender in the court. It is reported that Shereef is the leader of the gang that blackmailed Shamna Kasim and extorted money from several other women. He was the one who masterminded all the scamsScams A Scam is a confidence trick - a crime -  is an attempt to defraud a person or group after first gaining their trust through deception. Scams or confidence tricks exploit victims using their credulity, naïveté, compassion, vanity, irresponsibility, or greed and exploiting that. Researchers have defined confidence tricks as "a distinctive species of fraudulent conduct ... intending to further voluntary exchanges that are not mutually beneficial", as they "benefit con operators ('con men' - criminals) at the expense of their victims (the 'marks')". A scam is a crime even if no money was lost.. However, he was not physically present to carry out most of these scams. He made contact with most of the victims, including Shamna Kasim , through phone.

Police received information about Shereef from the co-accused and also from the complainants. It is also reported that apart from smuggling gold, they were also involved in hawala transactions. Police hopes to unearth several secrets by questioning Shereef.

SCARS™ Team
Society of Citizens Against Relationship ScamsSCARS SCARS - Society of Citizens Against Relationship Scams Inc. A government registered crime victims' assistance & crime prevention nonprofit organization based in Miami, Florida, U.S.A. SCARS supports the victims of scams worldwide and through its partners in more than 60 countries around the world. Incorporated in 2015, its team has 30 years of continuous experience educating and supporting scam victims. Visit www.AgainstScams.org to learn more about SCARS. Inc.
A Worldwide Crime Victims Assistance Nonprofit Organization
Visit: www.AgainstScams.org
Contact Us: Contact@AgainstScams.org

REPORT-BLOCKBlock Blocking is a technical action usually on social media or messaging platforms that restricts or bans another profile from seeing or communicating with your profile. To block someone on social media, you can usually go to their profile and select it from a list of options - often labeled or identified with three dots •••-RECOVER

Please be sure to report all scammers
on « www.Anyscam.com »

SCARS IS A DIGITAL PUBLISHER AND DOES NOT OFFER HEALTH OR MEDICAL ADVICE, LEGAL ADVICE, FINANCIAL ADVICE, OR SERVICES THAT SCARS IS NOT LICENSED OR REGISTERED TO PERFORM.

IF YOU’RE FACING A MEDICAL EMERGENCY, CALL YOUR LOCAL EMERGENCY SERVICES IMMEDIATELY, OR VISIT THE NEAREST EMERGENCY ROOM OR URGENT CARE CENTER. YOU SHOULD CONSULT YOUR HEALTHCARE PROVIDER BEFORE FOLLOWING ANY MEDICALLY RELATED INFORMATION PRESENTED ON OUR PAGES.

ALWAYS CONSULT A LICENSED ATTORNEY FOR ANY ADVICE REGARDING LEGAL MATTERS.

A LICENSED FINANCIAL OR TAX PROFESSIONAL SHOULD BE CONSULTED BEFORE ACTING ON ANY INFORMATION RELATING TO YOUR PERSONAL FINANCES OR TAX RELATED ISSUES AND INFORMATION.

This content and other material contained on the website, appsApps Applications or Apps An application (software), commonly referred to as an ‘app’ is a program on a computer, tablet, mobile phone or device. Apps are designed for specific tasks, including checking the weather, accessing the internet, looking at photos, playing media, mobile banking, etc. Many apps can access the internet if needed and can be downloaded (used) either for a price or for free. Apps are a major point of vulnerability on all devices. Some are designed to be malicious, such as logging keystrokes or activity, and others can even transport malware. Always be careful about any app you are thinking about installing., newsletter, and products (“Content”), is general in nature and for informational purposes only and does not constitute medical, legal, or financial advice; the Content is not intended to be a substitute for licensed or regulated professional advice. Always consult your doctor or other qualified healthcare provider, lawyer, financial, or tax professional with any questions you may have regarding the educational information contained herein. SCARS makes no guarantees about the efficacy of information described on or in SCARS’ Content. The information contained is subject to change and is not intended to cover all possible situations or effects. SCARS does not recommend or endorse any specific professional or care provider, product, service, or other information that may be mentioned in SCARS’ websites, apps, and Content unless explicitly identified as such.

The disclaimers herein are provided on this page for ease of reference. These disclaimers supplement and are a part of SCARS’ website’s Terms of Use.

SCARS, SCARS|INTERNATIONAL, SCARS, SCARS|SUPPORT, SCARS, RSN, Romance Scams Now, SCARS|INTERNATION, SCARS|WORLDWIDE, SCARS|GLOBAL, SCARS, Society of Citizens Against Relationship Scams, Society of Citizens Against Romance Scams, SCARS|ANYSCAM, Project Anyscam, Anyscam, SCARS|GOFCH, GOFCH, SCARS|CHINA, SCARS|CDN, SCARS|UK, SCARS|LATINOAMERICA, SCARS|MEMBER, SCARS|VOLUNTEER, SCARS Cybercriminal Data Network, Cobalt Alert, Scam Victims Support GroupSupport Group In a support group, members provide each other with various types of help, usually nonprofessional and nonmaterial, for a particular shared, usually burdensome, characteristic, such as romance scams. Members with the same issues can come together for sharing coping strategies, to feel more empowered and for a sense of community. The help may take the form of providing and evaluating relevant information, relating personal experiences, listening to and accepting others' experiences, providing sympathetic understanding and establishing social networks. A support group may also work to inform the public or engage in advocacy. They can be supervised or not. SCARS support groups are moderated by the SCARS Team and or volunteers., are all trademarks of Society of Citizens Against Relationship Scams Inc., All Rights Reserved Worldwide