ScammerScammer A Scammer or Fraudster is someone that engages in deception to obtain money or achieve another objective. They are criminals that attempt to deceive a victim into sending more or performing some other activity that benefits the scammer. Arrested: Arrest Nigerian Man Over Online ScamScam A Scam is a confidence trick - a crime -  is an attempt to defraud a person or group after first gaining their trust through deception. Scams or confidence tricks exploit victims using their credulity, naïveté, compassion, vanity, irresponsibility, or greed and exploiting that. Researchers have defined confidence tricks as "a distinctive species of fraudulent conduct ... intending to further voluntary exchanges that are not mutually beneficial", as they "benefit con operators ('con men' - criminals) at the expense of their victims (the 'marks')". A scam is a crime even if no money was lost.

EFCCEFCC Economic and Financial Crimes Commission The Economic and Financial Crimes Commission (EFCC) is a Nigerian law enforcement agency that investigates financial crimes such as advance fee fraud (419 fraud), scams, and money laundering. The EFCC was established in 2003, partially in response to pressure from the Financial Action Task Force on Money Laundering (FATF), which named Nigeria as one of 23 countries non-cooperative in the international community's efforts to fight money laundering. The agency has its head office in Abuja, Nigeria. Arrest Man Over Online Scam 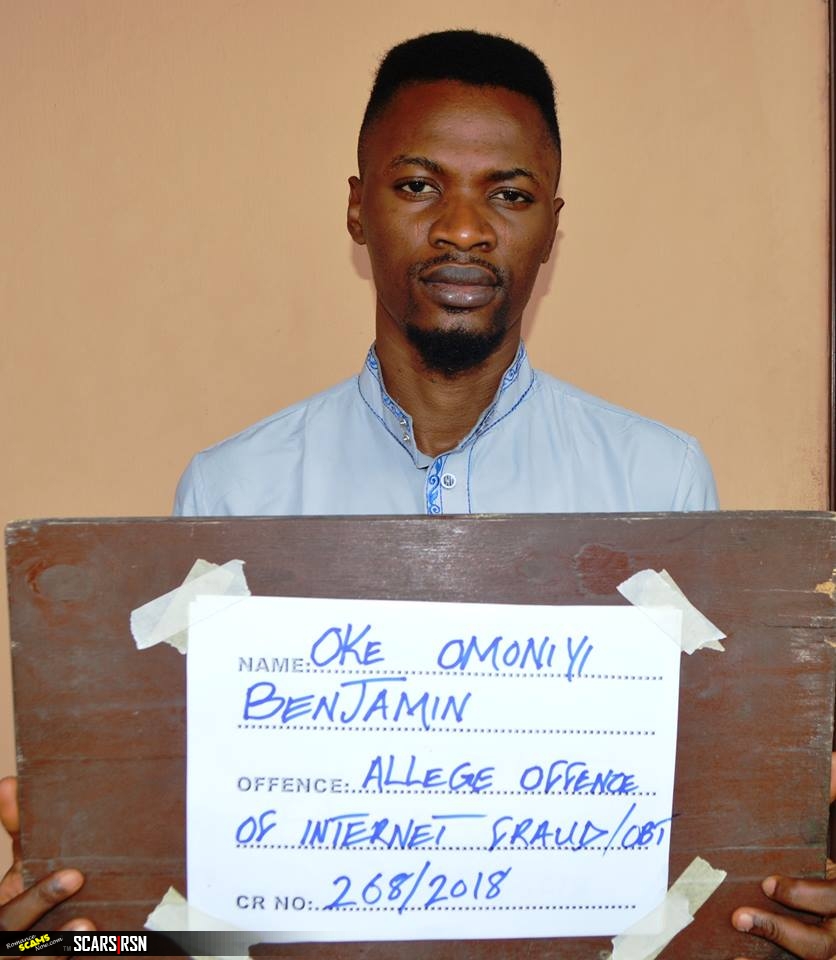 The Economic and Financial Crimes Commission, EFCC, Ibadan Zonal Office has arrested one Oke Omoniyi Benjamin (33) from Efon-Alaaye, Ekiti State for internet fraudFraud In law, fraud is intentional deception to secure unfair or unlawful gain (money or other assets), or to deprive a victim of a legal right. Fraud can violate civil law (e.g., a fraud victim may sue the fraud perpetrator to avoid the fraud or recover monetary compensation) or criminal law (e.g., a fraud perpetrator may be prosecuted and imprisoned by governmental authorities), or it may cause no loss of money, property, or legal right but still be an element of another civil or criminal wrong. The purpose of fraud may be monetary gain or other benefits, for example by obtaining a passport, travel document, or driver's license, or mortgage fraud, where the perpetrator may attempt to qualify for a mortgage by way of false statements. A fraud can also be a hoax, which is a distinct concept that involves deliberate deception without the intention of gain or of materially damaging or depriving a victim..
Benjamin was arrested sequel to an Intelligent Report received on 27th August 2018, alleging that he is into internet fraud and has also defrauded a number of foreigners of their money through fraudulent schemes.

The report, however, stated that Benjamin used the proceeds of his fraud to buy two cars, and also own a unisex salon known as Signatures Unisex Salon located at No. 238, Ilawe Road, opposite Baptist School, Ado-Ekiti, Ekiti State. The government will confiscate all property.

Benjamin however, admitted to the allegations against him and will be charged to court as s