We believe there is a war going on between the side that wants fairness in our public media, and the socialists that want AN “ANYTHING GOES” witch hunt on every topic and no law enforcement and for everyone to be a victim.

Do You Think That Is Too Far-Fetched?

Consider, that during the entirety of the Obama administration they made almost no effort to control online crime. They, in fact, allowed the Clintons to profit from corruption in Nigeria and elsewhere. Having you be a victim is part of the socialist ideology since dividing people by self-interest is the key to destroying unity.

The Rule Of Law Matters!

And this is why we are so adamant that you vote for Law & Order candidates next month.

Each of you can support greater socialistic views that support the scammers as victims too, or you can support right & wrong in your selection. We don’t need divisiveness based upon political hysteria, we need affirmation of verifiable truth.. If there is confirmation of wrongdoing then let loose the wrathWrath Anger, also known as wrath or rage, is an intense emotional state involving a strong uncomfortable and non-cooperative response to a perceived provocation, trigger, hurt or threat. About one-third of scam victims become trapped in anger for extended periods of time following a scam. A person experiencing anger will often experience physical effects, such as increased heart rate, elevated blood pressure, and increased levels of adrenaline and noradrenaline. Some view anger as an emotion that triggers a part of the fight or flight response. Anger becomes the predominant feeling behaviorally, cognitively, and physiologically. Anger can have many physical and mental consequences. While most of those who experience anger explain its arousal as a result of "what has happened to them", psychologists point out that an angry person can very well be mistaken because anger causes a loss in self-monitoring capacity and objective observability. of God fall on them, regardless of who they are, but otherwise, we need to work together to achieve results that benefit every woman, man, and child, not just a fringe group.

The reason why the article below is interesting is for these exact reasons. There is coming a confrontation over social media, and specifically Facebook. There will be a momentous shift back to the center from where it is now – so far to the left. When that occurs there will also be a management change at FB at the very top. The FB exec who was at the hearings showed a centrist view by being there, something the Zuck would never have done with his sophomoric socialist views. This is a hint of which way the winds will blow when the government and shareholder confrontation occurs next year after the election.

Let us hope that this event in Washington can be viewed in history as a turn of faith and a full display of the insanity we find around us constantly. That if sanity prevails and the rule of law, then we are on track to stop the abuses we face from around the world, not just here at home.

Oh, Why Did This All Matter To The World Of ScamsScams A Scam is a confidence trick - a crime -  is an attempt to defraud a person or group after first gaining their trust through deception. Scams or confidence tricks exploit victims using their credulity, naïveté, compassion, vanity, irresponsibility, or greed and exploiting that. Researchers have defined confidence tricks as "a distinctive species of fraudulent conduct ... intending to further voluntary exchanges that are not mutually beneficial", as they "benefit con operators ('con men' - criminals) at the expense of their victims (the 'marks')". A scam is a crime even if no money was lost.?

Because very simply, there will be new laws and treaties coming into existence over the next couple of years. There will be a revision to the Communications Decency Act that will involve personal and financial liability for social media companies for allowing scammers free reign. There will also be questions of “scammerScammer A Scammer or Fraudster is someone that engages in deception to obtain money or achieve another objective. They are criminals that attempt to deceive a victim into sending more or performing some other activity that benefits the scammer.’s rights” that are arrested outside the United States, plus the question of “Hot Pursuit” of scammers across borders. Many of these will be confirmed or rejected by the next U.S. Supreme Court. Frankly, we believe that a more Constitutionally oriented court will have the views we need for these issues!

Over the last two years we have seen amazing progress, let us hope it will be sustained, but that will only happen if you vote the right way!

We Hope You Agree

Tom Borman
RSN™ Team
a division of SCARSSCARS SCARS - Society of Citizens Against Relationship Scams Inc. A government registered crime victims' assistance & crime prevention nonprofit organization based in Miami, Florida, U.S.A. SCARS supports the victims of scams worldwide and through its partners in more than 60 countries around the world. Incorporated in 2015, its team has 30 years of continuous experience educating and supporting scam victims. Visit www.AgainstScams.org to learn more about SCARS.™
Miami Florida U.S.A. 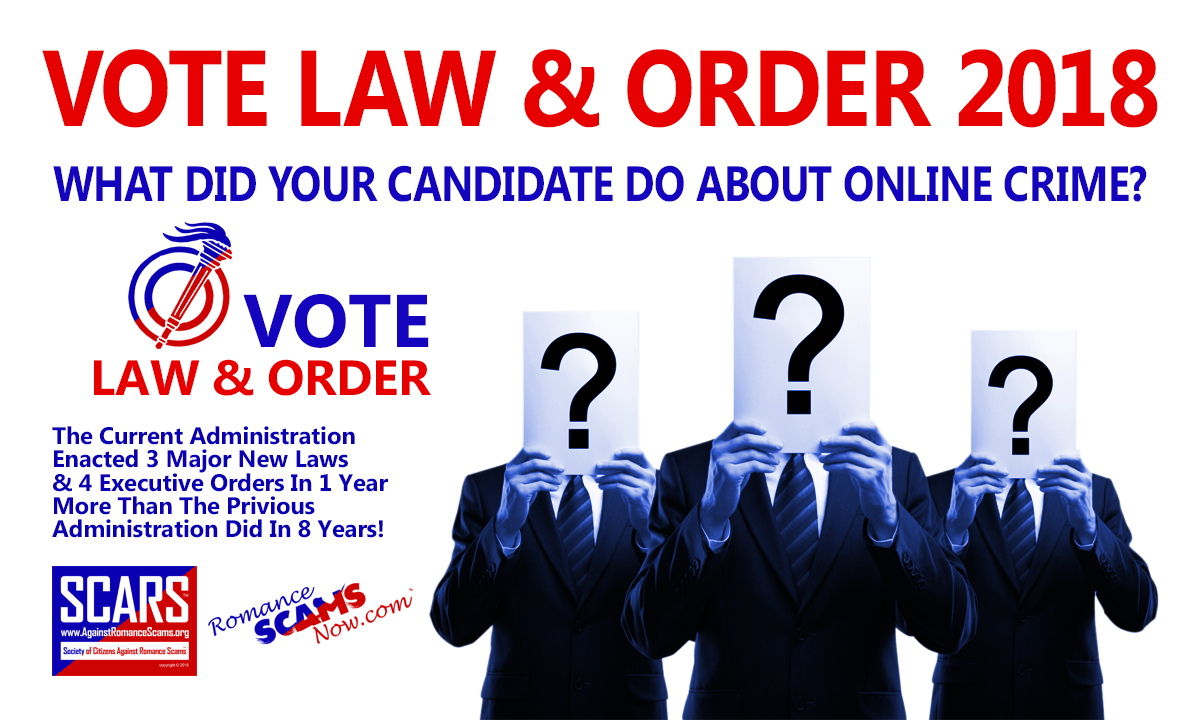