Home/SCARS™ Special Report: Scambaiting – You are Only Hurting Yourself
Previous Next

Continuing The Discussion On Scambaiting

SCARS|RSN Content Table of Contents hide
1 SCARS™ Special Report: Scambaiting – You are Only Hurting Yourself
1.1 Continuing The Discussion On Scambaiting
1.2 Scam Baiting Is Where A Victim Or Other Person Engages In Deception And In Some Cases Actual Online Fraud Lying To A Scammer For “Fun”
1.3 WRONG IS WRONG
1.4 Scambaiting Is Wrong
1.5 THIS IS NOT THE WAY TO RECOVER FROM A TRAUMATIC EXPERIENCE – RE-LIVING IT OVER AND OVER – CAN’T YOU SEE THAT?
1.6 In The End, This Is An Argument About Revenge And Who That Hurts Most
1.7 In Addition, Depending On Who The Scammers Are, Some Of Them Are In Fact Dangerous
1.8 The Latest SCARS|RSN Posts
1.9 SCARS™ Scam Warning: New “Brushing” Parcel Scam
1.10 SCARS™ Special Report: Nigerian EFCC Collapses Without Director Magu!
1.11 SCARS™ Insight: Ghana Scammer Study – Rationalizing Online Romance Fraud
1.12 SCARS™ Special Report: INTERPOL Report Shows Alarming Rate Of Cyberattacks During COVID-19
1.13 SCARS™ Insight: The Young Nigerian & West African Women Scammers
1.14 SCARS™ Legal Alert: Class Action Settlement On Google Plus
2 MORE INFORMATION
2.1 Tell us about your experiences with Romance Scammers in our « Scams Discussion Forum on Facebook »
2.2 FAQ: How Do You Properly Report Scammers?
2.3 Please be sure to report all scammers « HERE » or on « www.Anyscam.com »
2.4 Legal Notices:

The mistaken ideas are that it either wastes the scammer’s time or causes them to go to extreme tasks because of the scam that is being pulled on them.

Some wrongly believe that it is ok to scam a scammer.

That is like saying it is ok to murder a murderer.

In our view this is not a hobby. It is not fun. It is not therapeutic. It is engaging in the same kinds of deception that scammers do.

In fact, in our opinion, it can further reinforce the PTSD that a victim suffers from by continuing to expose the victim to scams.

It does not matter if the other person is a criminal or not. If you engage in deception regardless of your intentions it is ethically (and in some cases legally) the same. Wire fraud is wire fraud.

We expect the FBI to track down these criminals, but what if their African governments came to track you down?

Deception is deception, lying is lying. If you want to hold the high moral ground then do not scam bait.

Our position is that scambaiting has many negative qualities and it depends on the person who is doing it how great the damage is to them.

THIS IS NOT THE WAY TO RECOVER FROM A TRAUMATIC EXPERIENCE – RE-LIVING IT OVER AND OVER – CAN’T YOU SEE THAT?

Even those that make fun of scammers are doing it because deep down they loath scammers, while having fun with them.

In The End, This Is An Argument About Revenge And Who That Hurts Most

We view it as a self-destructive behavior.

It is also a contagious behavior.

Angry victims easily fall into that trap. For that reason, we disagree with it and prohibit it in our groups, and within our SCARS Membership, and through our SCARS Code of Conduct.

In Addition, Depending On Who The Scammers Are, Some Of Them Are In Fact Dangerous 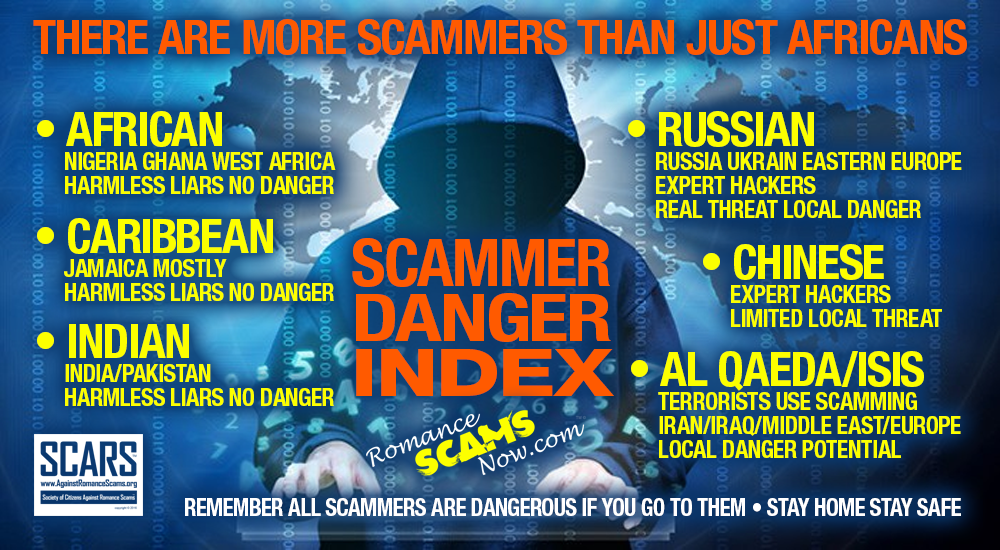 The different types of scammers by regions – some are dangerous

Our position would have no value if we did not defend it, so we are always willing to discuss it further.