A SCARSSCARS SCARS - Society of Citizens Against Relationship Scams Inc. A government registered crime victims' assistance & crime prevention nonprofit organization based in Miami, Florida, U.S.A. SCARS supports the victims of scams worldwide and through its partners in more than 60 countries around the world. Incorporated in 2015, its team has 30 years of continuous experience educating and supporting scam victims. Visit www.AgainstScams.org to learn more about SCARS. Guide to help with recognizing fakes!

Military rank is more than just who salutes whom. Military rank is a badge of leadership. Responsibility for personnel, equipment, and mission grows with each increase in rank.

Do not confuse rank with pay grades, such as E-1, W-2, and O-5. Pay grades are administrative classifications used primarily to standardize compensation across the military services. The “E” in E-1 stands for “enlisted” while the “1” indicates the pay grade for that position. The other pay categories are “W” for warrant officers and “O” for commissioned officers. Some enlisted pay grades have two ranks.

The Army, for example, has the ranks of corporal and specialist at the pay grade of E-4. A corporal is expected to fill a leadership role and has a higher rank than a specialist even though both receive the same amount of pay. In the Marine Corps, master gunnery sergeants and sergeant majors are E-9s, but the sergeant major has the higher rank.

Service members in pay grades E-1 through E-3 are usually either in some kind of training status or on their initial assignment. The training includes the basic training phase where recruits are immersed in military culture and values and are taught the core skills required by their service component.

Basic training is followed by a specialized or advanced training phase that provides recruits with a specific area of expertise or concentration. In the Army and Marines, this area is called a military occupational specialty; in the Navy, it is known as a rate; and in the Air Force or Space Force, it is simply called an Air Force specialty.

NOTE: Appearance of U.S. Space Force insignia is the same as the U.S. Air Force. 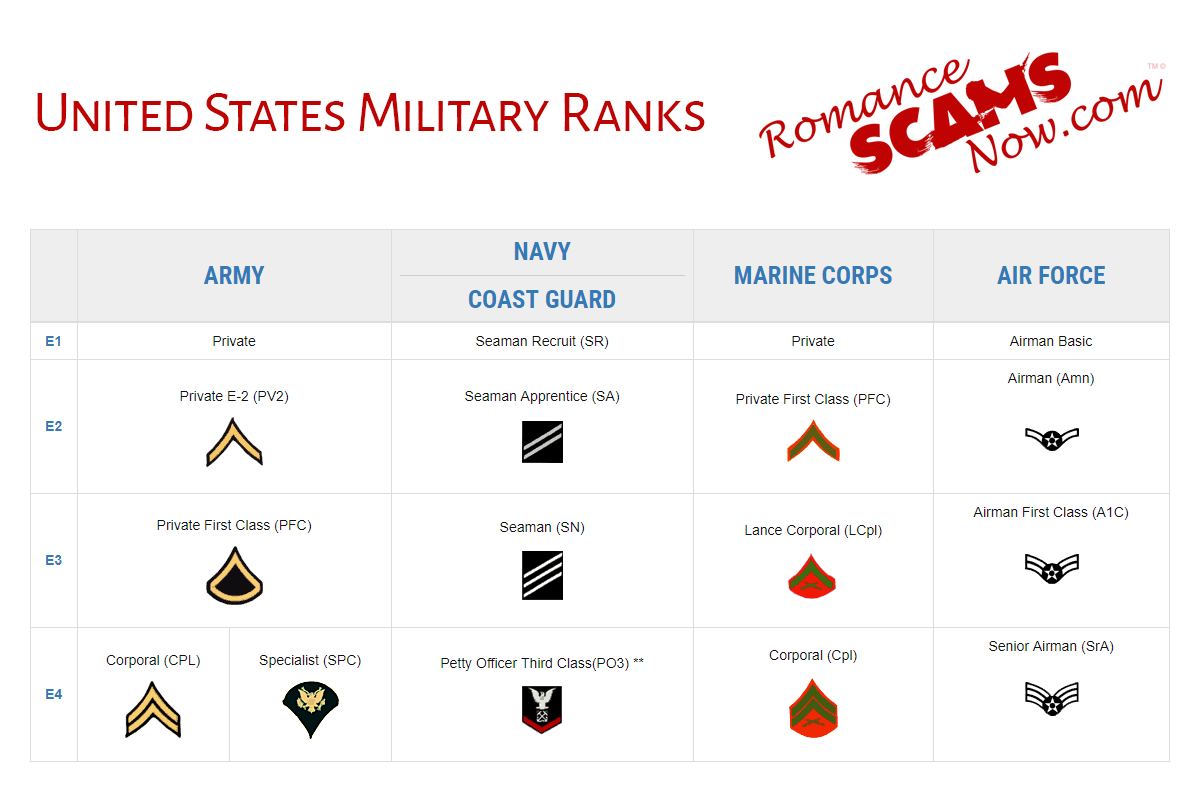 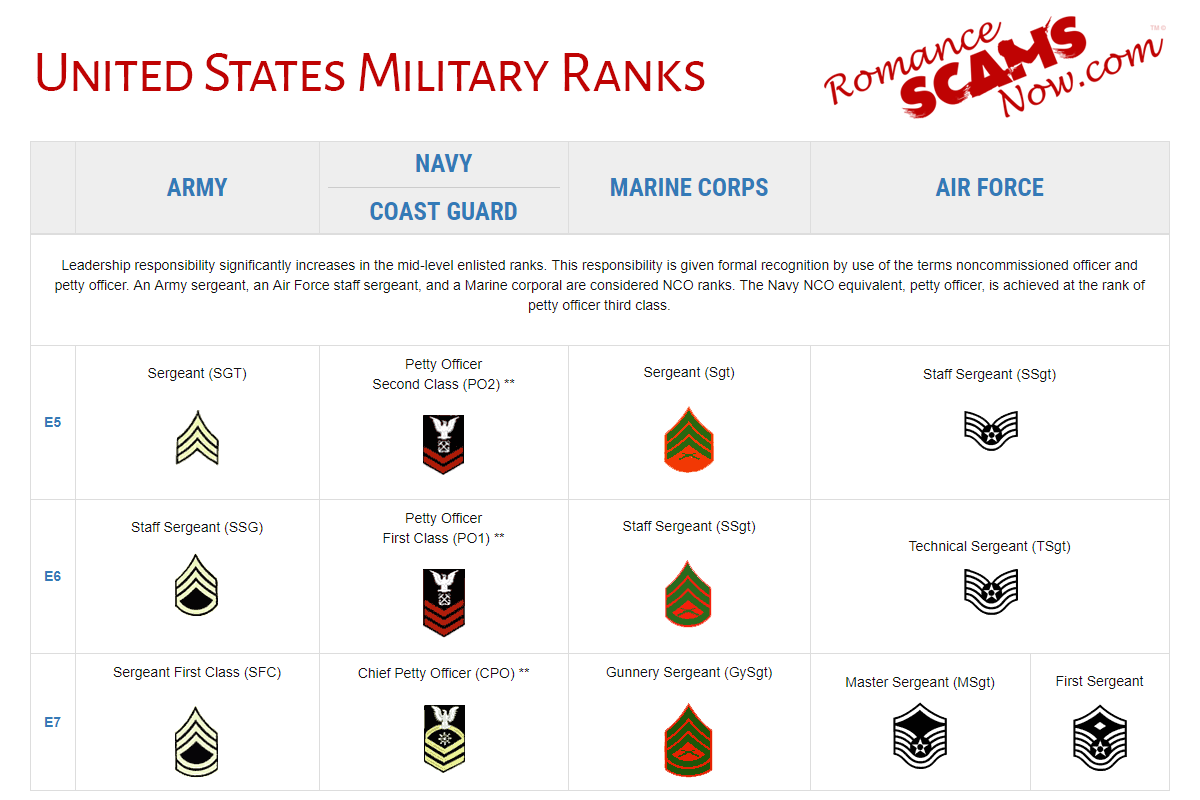 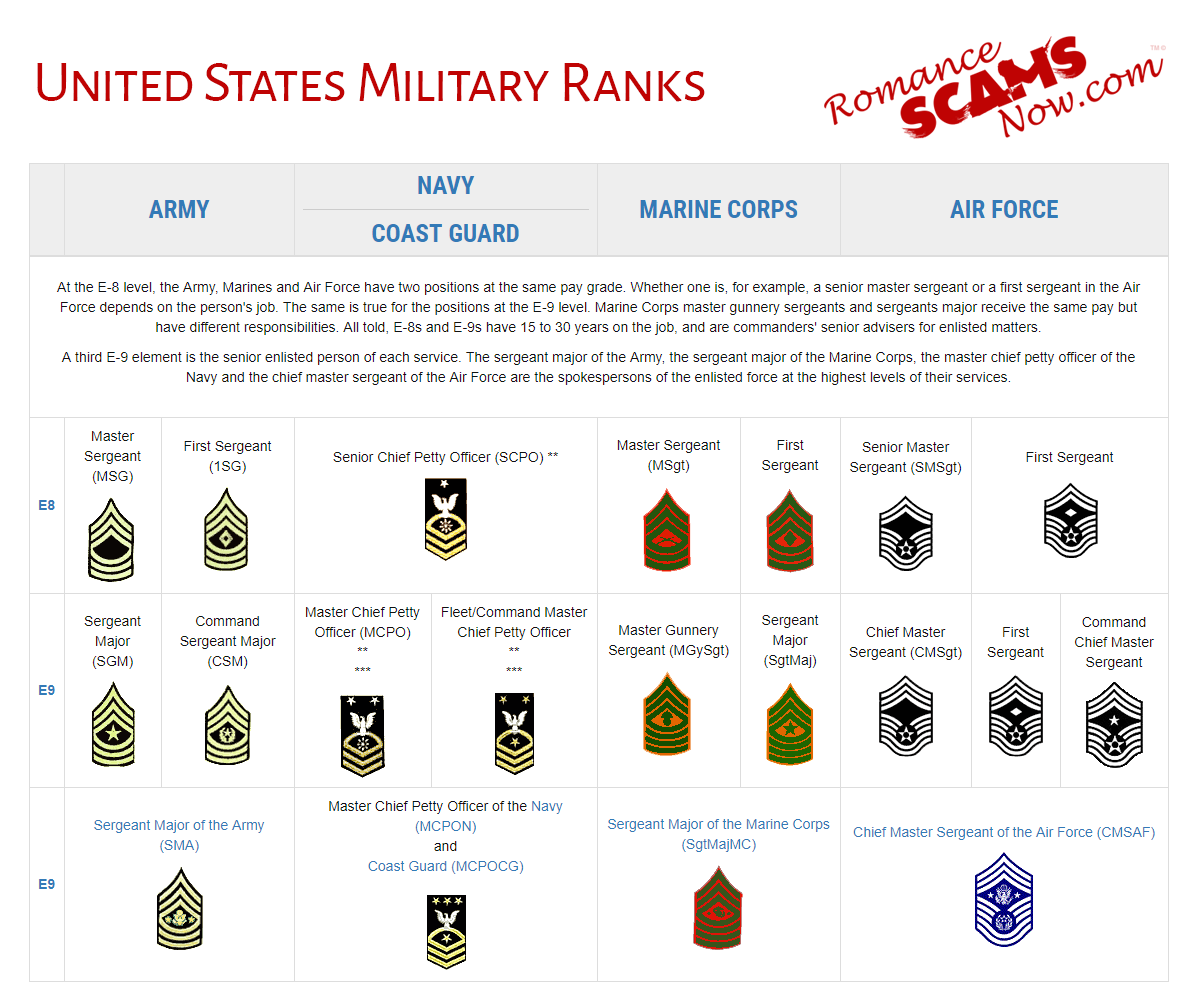 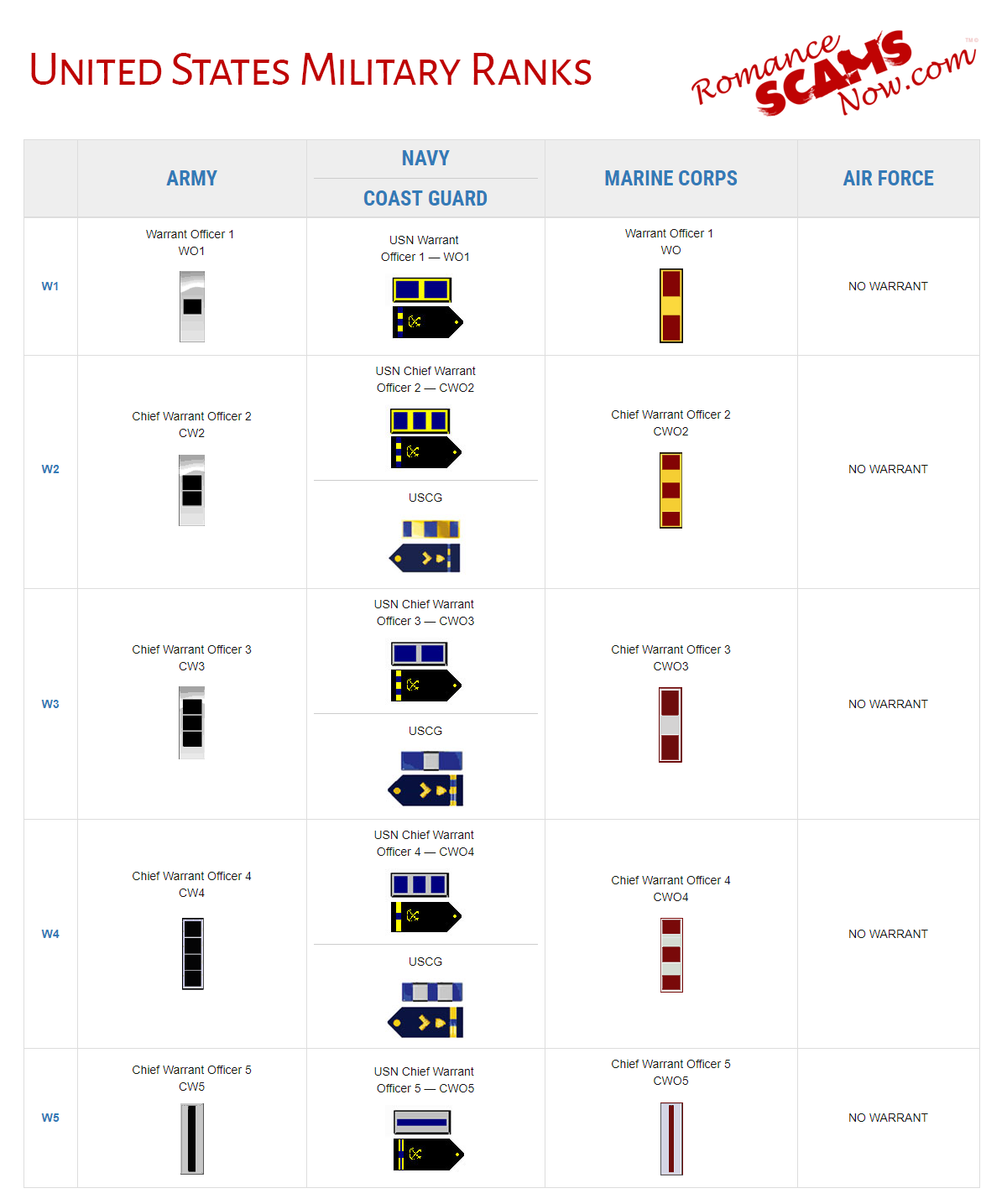 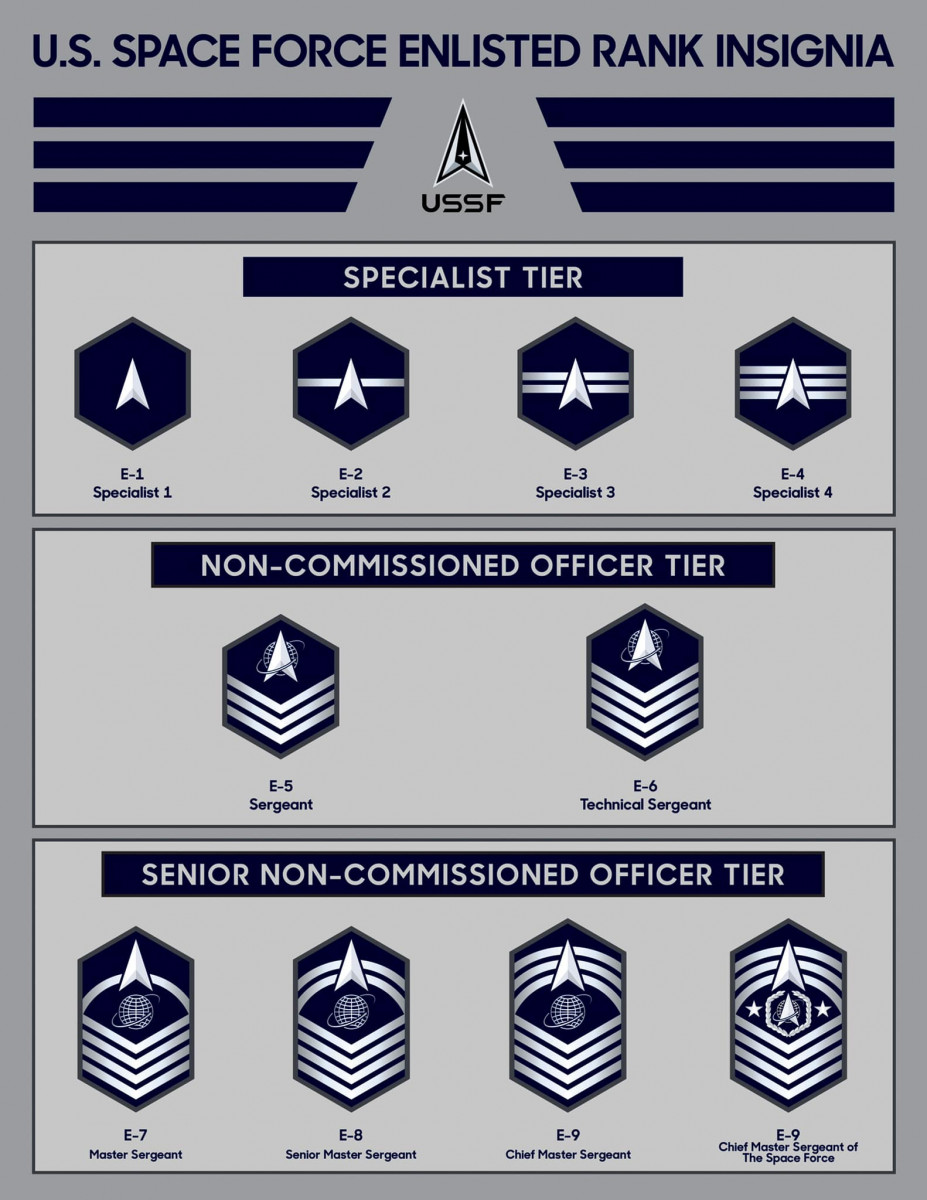 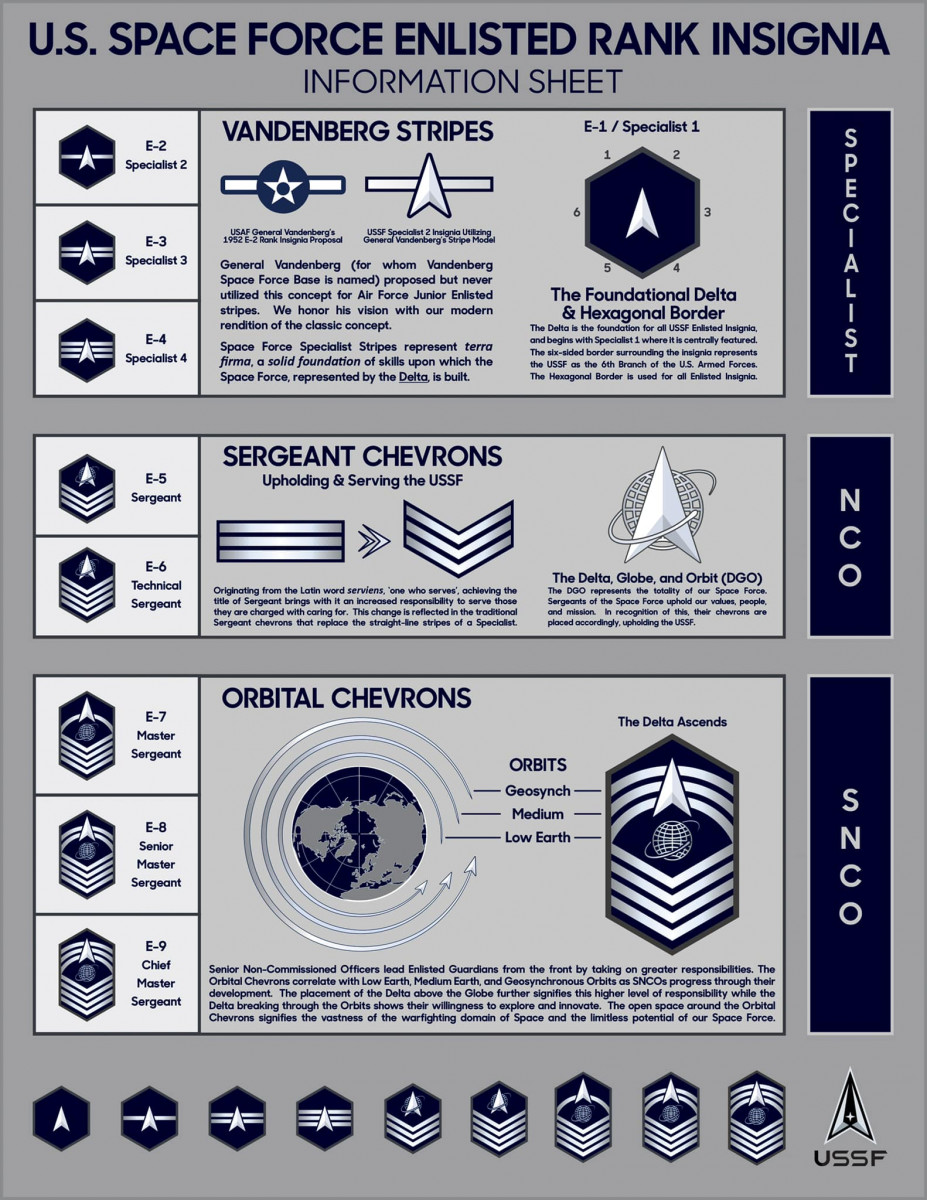 NOTE: Appearance of U.S. Space Force insignia is the same as the U.S. Air Force.

To Learn More About The United States Military Click Here 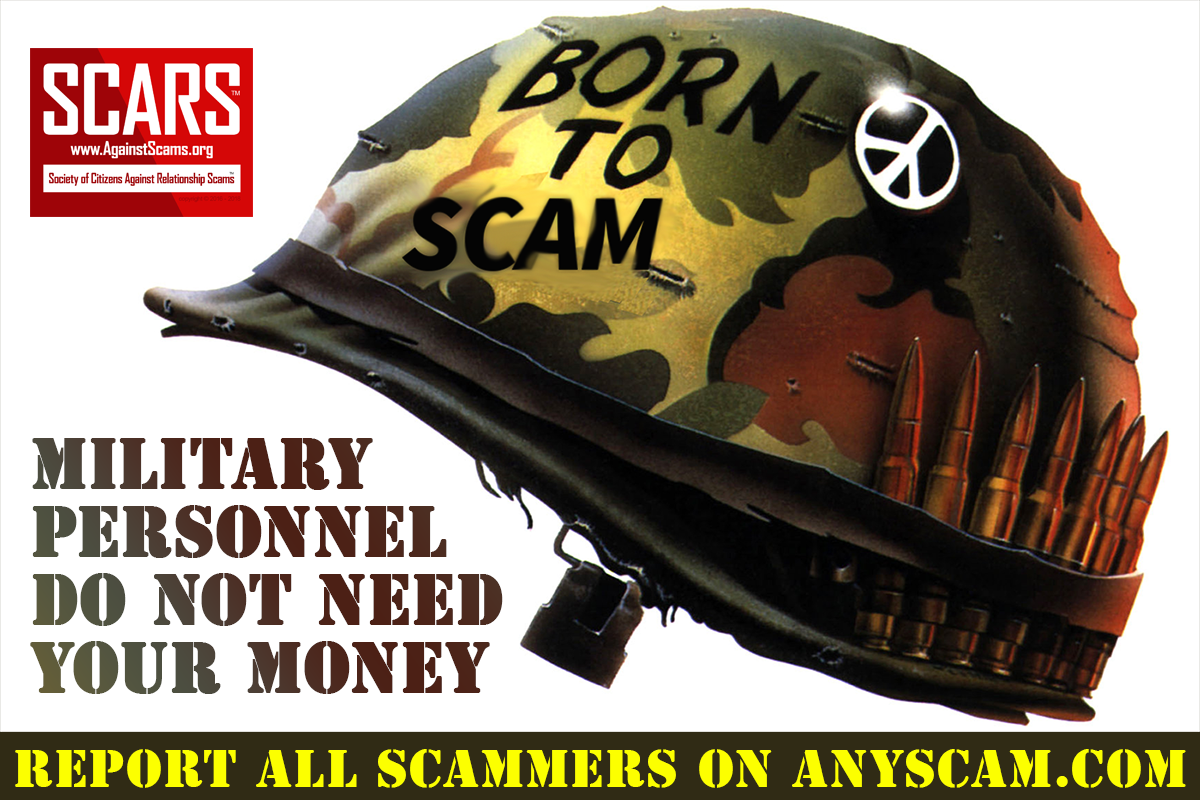 Essential Tools For Every ScamScam A Scam is a confidence trick - a crime -  is an attempt to defraud a person or group after first gaining their trust through deception. Scams or confidence tricks exploit victims using their credulity, naïveté, compassion, vanity, irresponsibility, or greed and exploiting that. Researchers have defined confidence tricks as "a distinctive species of fraudulent conduct ... intending to further voluntary exchanges that are not mutually beneficial", as they "benefit con operators ('con men' - criminals) at the expense of their victims (the 'marks')". A scam is a crime even if no money was lost. Victim From SCARS Publishing

Each is based on our SCARS Team’s 31 plus years of experience.

LEARN HOW TO RECOVER ON YOUR OWN

This program is designed to help scam victims struggling to recover on their own and for those who want to understand the overall process. You can be using other resources, such as traumaTrauma Emotional and psychological trauma is the result of extraordinarily stressful events that shatter your sense of security, making you feel helpless in a dangerous world. Psychological trauma can leave you struggling with upsetting emotions, memories, and anxiety that won’t go away. It can also leave you feeling numb, disconnected, and unable to trust other people. Traumatic experiences often involve a threat to life or safety or other emotional shocks, but any situation that leaves you feeling overwhelmed and isolated can result in trauma, even if it doesn’t involve physical harm. It’s not the objective circumstances that determine whether an event is traumatic, but your subjective emotional experience of the event. The more frightened and helpless you feel, the more likely you are to be traumatized. Trauma requires treatment, either through counseling or therapy or through trauma-oriented support programs, such as those offered by SCARS. counselingCounseling Counseling is the professional guidance of the individual by utilizing psychological methods especially in collecting case history data, using various techniques of the personal interview, and testing interests and aptitudes. A mental health counselor (MHC), or counselor, is a person who works with individuals and groups to promote optimum mental and emotional health. Such persons may help individuals deal with issues associated with addiction and substance abuse; family, parenting, and marital problems; stress management; self-esteem; and aging. They may also work with "Social Workers", "Psychiatrists", and "Psychologists". SCARS does not provide mental health counseling. or therapy, qualified support groupsSupport Groups In a support group, members provide each other with various types of help, usually nonprofessional and nonmaterial, for a particular shared, usually burdensome, characteristic, such as romance scams. Members with the same issues can come together for sharing coping strategies, to feel more empowered and for a sense of community. The help may take the form of providing and evaluating relevant information, relating personal experiences, listening to and accepting others' experiences, providing sympathetic understanding and establishing social networks. A support group may also work to inform the public or engage in advocacy. They can be supervised or not. SCARS support groups are moderated by the SCARS Team and or volunteers., or completely independent – on your own!

The SCARS Steps program is a complete program and is provided for the purpose of helping scam victims to overcome this experience. Throughout this SCARS Steps Program, we speak about issues and challenges that a victim may have and help guide them through their recovery. But each person is different and it is important to understand your own reasons for being vulnerable to being scammed.

After the trauma of being scammed, you need to take steps to recover and move on. This may be an alternative to counseling in the short term, but we still encourage you to seek out professional help & support. Throughout this SCARS Steps Program, we speak about issues, challenges, defects, or problems that a victim may have in a generalized way.

The SCARS GREEN BOOK will help you recover from your scam offline and it will always be there when you need it!

A Guide For Families & Friends Of Scam Victims

This SCARS Publishing book represents a complete guide to help the families and friends understand how these scamsScams A Scam is a confidence trick - a crime -  is an attempt to defraud a person or group after first gaining their trust through deception. Scams or confidence tricks exploit victims using their credulity, naïveté, compassion, vanity, irresponsibility, or greed and exploiting that. Researchers have defined confidence tricks as "a distinctive species of fraudulent conduct ... intending to further voluntary exchanges that are not mutually beneficial", as they "benefit con operators ('con men' - criminals) at the expense of their victims (the 'marks')". A scam is a crime even if no money was lost. work and how to help the victim.

The SCARS Slate Book should be purchased by family and friends to better understand what happened to the victim and the traumatic impact on them. But it can also be shared by the victim so that they do not have to explain to family and friends about the scam. This publication is to help others to help Scam Victims to make it through this traumatic experience and recover.

Each person is different and it is important to understand how relationship scamsRelationship Scam A Relationship Scam is a one-to-one criminal act that involves a trust relationship and uses deception & manipulation to get a victim to give to the criminal something of value, such as money! Click here to learn more: What Is A Relationship Scam? work and why people are vulnerable; to being scammed, how they were lured in, then groomed and manipulated. This understanding is essential in helping them through the process of ending the scam and then on to recovery. The SCARS Slate Book will provide the information necessary to help support a victim through this process.

ORGANIZE YOUR INFORMATION TO MAKE THE REPORTING PROCESS SIMPLE!

Helps you get and stay organized. This publication is to help Scam Victims organize their crime information. Complete this information before reporting to the police then bring this book with you

Before or after reporting to the police the RED BOOK gives you a dedicated tool to record all the essential facts of this crime. The Victim, the Scammers, the Money, and your Police interactions. Everything that really matters can be easily recorded for your immediate use and for the future!

As we have seen, money recovery/repayment programs can become available years after the scam ends and you need to keep all the details of this crime in case it is needed. We have also seen scammers being extradited to the U.S. and other countries, this will help in the event you testify or give statements, Additionally, this helps you have your information ready to qualify for victims’ benefits, compensation, or aid.

The Official SCARS RED BOOK is your way of recording all the important facts of this crime so that you do not lose essential information, Complete the RED BOOK then put it away with the confidence that you will have it if or when it is needed.

See all our books and motivational gifts for scam victims at Shop.AgainstScams.org

Your generous purchase allows us to maintain our scam avoidance, support, and recovery services. Please help SCARS and stand proud.

TAGS: SCARS, Information About Scams, Anti-Scam, Scams, Scammers, Fraudsters, Cybercrime, Crybercriminals, Romance Scams, Scam Victims, Online FraudFraud In law, fraud is intentional deception to secure unfair or unlawful gain (money or other assets), or to deprive a victim of a legal right. Fraud can violate civil law (e.g., a fraud victim may sue the fraud perpetrator to avoid the fraud or recover monetary compensation) or criminal law (e.g., a fraud perpetrator may be prosecuted and imprisoned by governmental authorities), or it may cause no loss of money, property, or legal right but still be an element of another civil or criminal wrong. The purpose of fraud may be monetary gain or other benefits, for example by obtaining a passport, travel document, or driver's license, or mortgage fraud, where the perpetrator may attempt to qualify for a mortgage by way of false statements. A fraud can also be a hoax, which is a distinct concept that involves deliberate deception without the intention of gain or of materially damaging or depriving a victim., Online Crime Is Real Crime, Scam Avoidance, Military Ranks, Military Insignia, Rank Designs, U.S. Army, U.S. Navy, U.S. Coast Guard, U.S. Marine Corps, U.S. Air Force, U.S. Space Force, Fake Soldiers, Military Impersonators