SCARSSCARS SCARS - Society of Citizens Against Relationship Scams Inc. A government registered crime victims' assistance & crime prevention nonprofit organization based in Miami, Florida, U.S.A. SCARS supports the victims of scams worldwide and through its partners in more than 60 countries around the world. Incorporated in 2015, its team has 30 years of continuous experience educating and supporting scam victims. Visit www.AgainstScams.org to learn more about SCARS.™ Guide: Clones – Copying Profiles & Identities

Cloning: Can My Real Grandmother Please Stand Up?

Most Of Us Have Heard Someone Say This:

“Someone Cloned My Profile”

And they alert you that their profile must have been cloned!

(The other over used favorite term is “someone hacked by profile”)

The Urban LegendUrban Legend Urban Legend An urban legend, urban myth, urban tale, or contemporary legend is a genre of modern folklore comprising stories circulated as true, especially on social media. These legends can be entertaining but often concern serious topics. They may also be confirmation of moral standards, or reflect prejudices, or be a way to make sense of societal anxieties. Urban legends are most often circulated orally but can be spread by any media, including newspapers, mobile news apps, e-mail, and social media. Some urban legends have passed through the years with only minor changes and seem impervious to exposure as untrue. is that almost every account is being cloned. Your picture and your name have been used to create a new Facebook account and they don’t need your password to do this this (which is true) – they just copy everything – because you let them.

They want your friends to add them to their Facebook account, then your friends will think that it’s you and accept your request.

Someone Is Always Sending Out Messages Alerting The World About This!

Is this accurate? No, not really, but scammers do clone profiles – that part is a fact.

We all know that scammers need an endless stream of fake profiles – different names, different faces, different content. But what few realize is how incredibly hard it is to do this. With over one billion fake identities online, this is a task bigger than inventing the atomic bomb!

Scammers are, after all, not lazy but they are practical and limited in the time they can spend on each fake identity. They have to budget their time for maximum effectiveness. This means that by definition they have to be fast when creating new profiles. 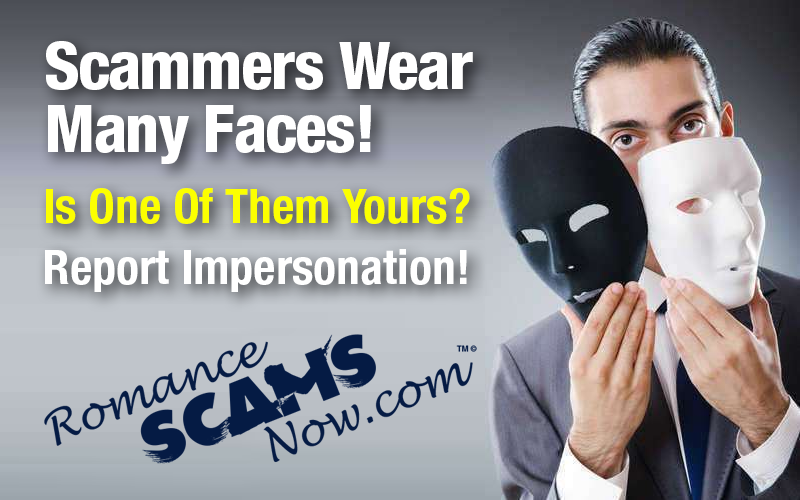 They do it because it gives them a real, rich identity they can control, but more importantly, it gives them the ability to “mine” a new ecosystem of victims – YOUR FRIENDS and FAMILY!

With each new victim, they look for how rich your profile is – how many people you are connected to. Quite frankly if you accept them and you have a very large friend-base that they can see (meaning you have not limited visibility to your Friend’s List) – they see you as a “fat target.”

The ScammerScammer A Scammer or Fraudster is someone that engages in deception to obtain money or achieve another objective. They are criminals that attempt to deceive a victim into sending more or performing some other activity that benefits the scammer. Model Goes Something Like This:

Some work 20 hour days (those few on their own), but most work in teams but still work 12 hour days since the odds are actually against them and it takes weeks or months to “close” a victim and get the money. The money does come but they don’t have a lot of focused attention to put on these fake profiles. Plus there is just the human limitation of attention – it is impossible to keep all the identities straight.

You should especially avoid Anti-scam groups with strong ties to Vietnam, Laos, and India that may be very careless about allowing scammers in as their members – these scammer group members could be the “harvesters”.

Do You See How Most Of These Things Lead Back To Your Own Decisions?

This is not about blamingBlaming Blame or Blaming is the act of censuring, holding responsible, making negative statements about an individual or group that their action or actions are socially or morally irresponsible, the opposite of praise. When someone is morally responsible for doing something wrong, their action is blameworthy. By contrast, when someone is morally responsible for doing something right, we may say that his or her action is praiseworthy. Blame imparts responsibility for an action or act, as in that they made a choice to perform that act or action. yourself but helping you understand that there are precautions that you are responsible for and consequences to the failure to protect yourself and your connection.

However, even with that, once they are YOUR FRIEND they can still see comments and likes in your social media timeline – once you let them in they will have access but you can at least limit it by proper privacy settings.

Even better is not to let them in at all, but your friends may be sloppy too – so you are potentially at risk always unless you learn how to spot the fakes that will inevitably come along.

But there is a sort of good news in all of this: cloning is hard. Everything must be copied by hand and it can take quite a bit of time to clone a profile. This limits how many cloned profiles an individual scammer can make.

Except … In Comes Outsourcing!

As scamming continues it will become increasingly production-line oriented.

Sometimes the scammer will clone YOU or they look through your friend’s list and chooses one of them.

They take note of all of a person’s friends and make a decision to clone them. They save some of that person’s photos and create a whole new account. They copy all the information from the real account, use the same profile picture, and so on.

If you suspect that a friend request comes from a CLONED account it is fairly simple to confirm this!

Either just text them (to their phone) and ask them, or ask the “clone” a trick question – such as “thanks for meeting me last Thursday at Dunkin Donuts” and look for the reply. Scammers trip themselves up all the time.

As we have said, cloning serves an important role in their scam production. It’s simple, they do it because they get away with it.

A clone makes them seem more credible. They can get you and others to accept their fake friend request by making them look more like the real thing.

Again, the good news is that most scammer fake profiles are very short-lived, so they do everything they can to make the account more believable. The more real it looks the longer it lasts, the more trust they will gain and have to spend less time creating more accounts.

The first thing you should always do is ask the established friend if they created a new account. This usually results in them saying no, in which case you can tell them about the fake.  If it is a fake you can report it to the social media company as a fake or especially an impersonationImpersonation An impersonator is someone who imitates or copies the behavior or actions of another. There are many reasons for impersonating someone, such as: part of a criminal act such as identity theft, online impersonation scam, or other fraud. This is usually where the criminal is trying to assume the identity of another, in order to commit fraud, such as accessing confidential information or to gain property not belonging to them. Also known as social engineering and impostors. of someone you know! This is effective and can quickly get the clone deleted if reported properly.

Do NOT ask the fake in messenger a question only the real one would know. It can identify them, but it also gives them a question that they will go find the answer to. Ask them something random that there is no correct answer for – that way they are NOT alerted when you blockBlock Blocking is a technical action usually on social media or messaging platforms that restricts or bans another profile from seeing or communicating with your profile. To block someone on social media, you can usually go to their profile and select it from a list of options - often labeled or identified with three dots ••• them.

NEVER confront a scammer », always leave them guessing at what went wrong!

Lastly, you’ll want to report them to Facebook (or other social media companies) and have the real friend report them as well. The more a fake account is reported, the faster it’s taken down.

TAGS: SCARS, Important Article, Information About ScamsScams A Scam is a confidence trick - a crime -  is an attempt to defraud a person or group after first gaining their trust through deception. Scams or confidence tricks exploit victims using their credulity, naïveté, compassion, vanity, irresponsibility, or greed and exploiting that. Researchers have defined confidence tricks as "a distinctive species of fraudulent conduct ... intending to further voluntary exchanges that are not mutually beneficial", as they "benefit con operators ('con men' - criminals) at the expense of their victims (the 'marks')". A scam is a crime even if no money was lost., Anti-Scam, Bangladesh, Cartel, Clone, Clones, Cloning, Facebook, Fake Profile, Gang, India, Pakistan, Scammer, Vietnam