Gaslighting – Destroying A Victim’s Sense Of Reality – A SCARS™ Guide

Gaslighting – Destroying A Victim’s Sense Of Reality – A SCARS™ Guide

ˈɡaslīt
verb
gerund or present participle: Gaslighting
manipulate (someone) by psychological means into questioning their own sanity or reality.
“in the first episode, Karen Valentine is being gaslighted by her husband”

Gaslighting is the systematic process of attempting to erode another person’s reality by consistently telling them that what they are experiencing is not true! And the gradual giving up on their reality; or by the suspension of disbelief by that person! 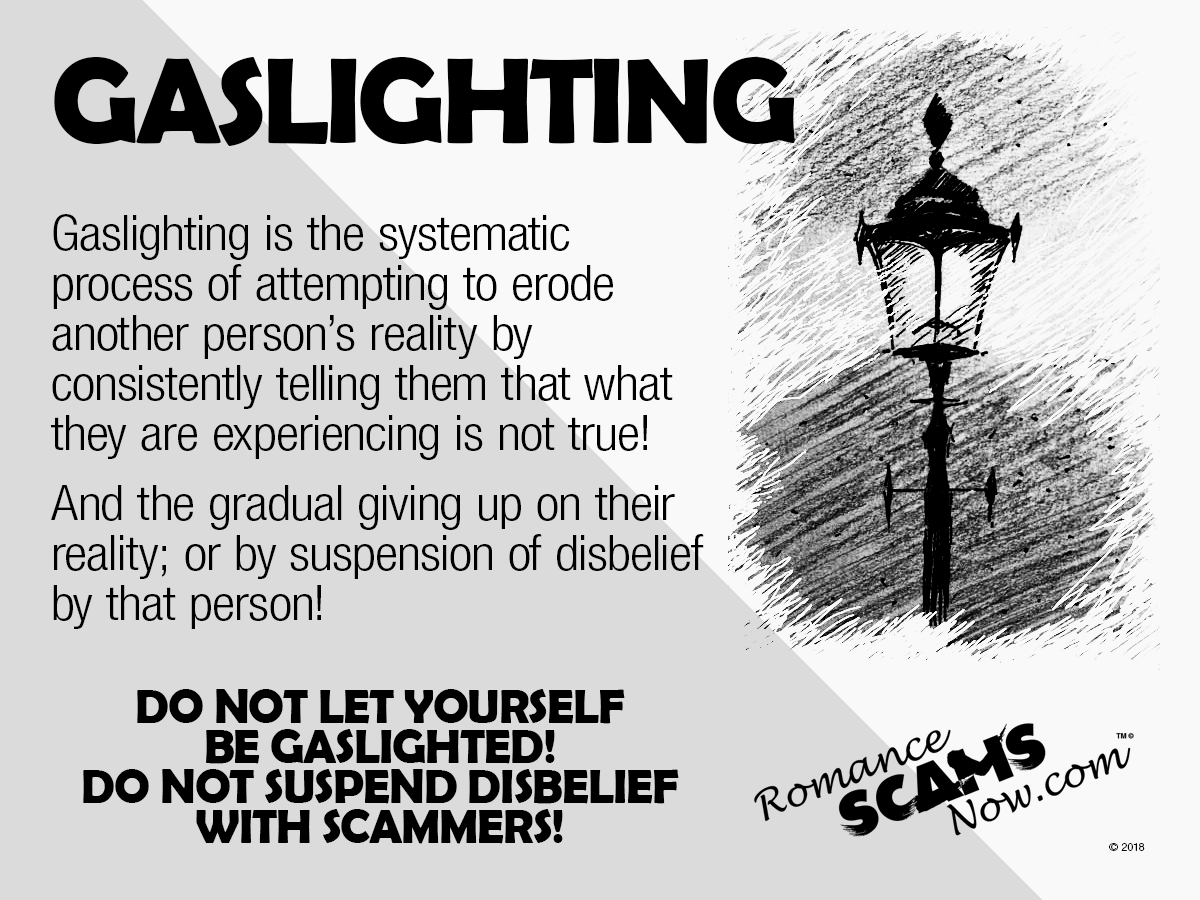 Do Not Let Yourself Be Gaslighted!
Do Not Suspend Disbelief With Scammers!

Gaslighting – What It Is?

Gaslighting is a form of manipulation that seeks to sow seeds of doubt in a targeted individual or in members of a targeted group, hoping to make them question their own memory, perception, and sanity. Using persistent denial, misdirection, contradiction, and lying, it attempts to destabilize the target and delegitimize the target’s belief.

Instances may range from the denial by an abuser that previous abusive incidents ever occurred up to the staging of bizarre events by the abuser with the intention of disorienting the victim.  The term has been used in clinical and research literature, as well as in political commentary:

Origin Of The Term

The term originates in the systematic psychological manipulation of a victim by her husband in the 1938 stage play “Gas Light,” known as Angel Street in the United States, and the film adaptations released in 1940 and 1944. In the story, a husband attempts to convince his wife and others that she is insane by manipulating small elements of their environment and insisting that she is mistaken, remembering things incorrectly, or delusional when she points out these changes. The original title stems from the dimming of the gas lights in the house that happened when the husband was using the gas lights in the flat above while searching for the jewels belonging to a woman whom he had murdered. The wife correctly notices the dimming lights and discusses it with her husband, but he insists that she merely imagined a change in the level of illumination.

The term “Gaslighting” has been used colloquially since the 1960s to describe efforts to manipulate someone’s perception of reality.

Sociopaths and narcissists frequently use Gaslighting tactics. Sociopaths consistently transgress social mores, break laws, and exploit others, but typically also are convincing liars, sometimes charming ones, who consistently deny wrongdoing. Thus, some who have been victimized by sociopaths may doubt their own perceptions. Some physically abusive spouses may gaslight their partners by flatly denying that they have been violent. Gaslighting may occur in parent-child relationships, with either parent, child, or both lying to each other and attempting to undermine perceptions.

This is also a pivotal technique used by Scammers and Con Artists to prevent their victim form recognizing inconsistencies and errors in their fake stories used to manipulate their victims. Every victim can look back at their experience and see those moments of manipulation that they could not see while they were occurring.

An abuser’s ultimate goal is to make their victim second guess their every choice and question their sanity, making them more dependent on the abuser. A tactic which further degrades a target’s self-esteem is for the abuser to ignore, then attend to, then ignore the victim again, so the victim lowers their personal bar for what constitutes affection and perceives themselves as less worthy of affection.

There are two characteristics of Gaslighting:

Three most common methods of gaslighting are:

Hiding: The abuser may hide things from the victim and cover up what they have done. Instead of feeling ashamed, the abuser may convince the victim to doubt their own beliefs about the situation and turn the blame on themselves.

Changing: The abuser feels the need to change something about the victim. Whether it be the way the victim dresses or acts, they want the victim to mold into their fantasy. If the victim does not comply, the abuser may convince the victim that they are in fact not good enough.

Control: The abuser may want to fully control and have power over the victim. In doing so, the abuser will try to seclude them from other friends and family where only they can influence the victim’s thoughts and actions.

What SCARS Visitors Were Looking For?