SCARSSCARS SCARS - Society of Citizens Against Relationship Scams Inc. A government registered crime victims' assistance & crime prevention nonprofit organization based in Miami, Florida, U.S.A. SCARS supports the victims of scams worldwide and through its partners in more than 60 countries around the world. Incorporated in 2015, its team has 30 years of continuous experience educating and supporting scam victims. Visit www.AgainstScams.org to learn more about SCARS.™ Special Report: Facebook 10 Year Challenge ScamScam A Scam is a confidence trick - a crime -  is an attempt to defraud a person or group after first gaining their trust through deception. Scams or confidence tricks exploit victims using their credulity, naïveté, compassion, vanity, irresponsibility, or greed and exploiting that. Researchers have defined confidence tricks as "a distinctive species of fraudulent conduct ... intending to further voluntary exchanges that are not mutually beneficial", as they "benefit con operators ('con men' - criminals) at the expense of their victims (the 'marks')". A scam is a crime even if no money was lost./Hoax

If you frequently use Social media, you must have noticed a trend in the past two weeks of people posting their selfies side-by-side, one at current age in 2019 and another one from ten years ago, 2009.

Hollywood celebrities like Tom Cruise, Reese Witherspoon, Kate Hudson, Isla Fisher, Ryan Seacrest, etc. all are seen promoting this challenge. It is fun to see actors and giant businessman making fun of themselves in this 10-year-challenge.

Is The 10 Year Challenge A Scam?

According to reports from Web Analysts, this challenge generated more than 5 million Facebook interactions just in three days which is a record. On the contrary, security experts are reminding people not to share the pictures because Facebook is using this data for their data mining purposes.

Tech expert like Kate O’Neill described this challenge as a nefarious process of data mining because Facebook 10 year challenge is helping in the advancement of image recognition algorithms. 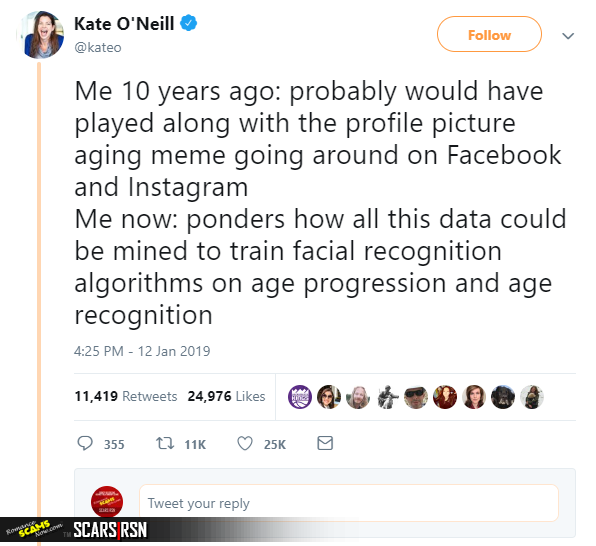 Several reports suggest that Facebook already has photographic data of each FB users. But, chronological order is missing! Additionally, Facebook might use this data to develop algorithms that could benefit in image recognition of all Facebook users.

People via this challenge are writing out the exact year of difference in the photos and unknowingly making the margin of error in the Facebook facial recognition algorithm much slighter.

In many versions of the meme, people even got instructions to post their first profile picture. This information is very important as it can help to train algorithms in age-related characteristics and progressions.

In other words, Facebook 10 year challenge mines data (especially images) and would help only if users have a simple, clean labeled set of photos (then-and-now).