Facebook says that they estimate that fake accounts represented approximately 5% of our worldwide monthly active users (MAU) on Facebook during Q1 2019 and Q4 2018. BULLSHIT!

We want to protect and respect both expression and personal safety on Facebook. Our goal is to create a safe and welcoming community for the more than 2 billion people who use Facebook around the world, across cultures and perspectives.

To help us with that goal, our Community Standards define what is and isn’t allowed on Facebook. When we find something that goes against these standards, we remove it. We invest in technology, processes and people to help us act quickly so that violations of our standards affect as few people as possible.

People may intentionally or unintentionally act in ways that go against our standards. We respond differently depending on the severity, and we may take further action against people who repeatedly violate standards. In some cases, we also contact law enforcement to prevent offline harm.

Our goal is to remove as many fake accounts on Facebook as we can. We prioritize enforcement against users and accounts that seek to cause harm and find many of these fake accounts are used in spam campaigns and are financially motivated.

Authenticity is the cornerstone of our community. We believe that people are more accountable for their statements and actions when they use their authentic identities. That’s why we require people to connect on Facebook using the name they go by in everyday life. Our authenticity policies are intended to create a safe environment where people can trust and hold one another accountable.

Facebook says it has seen a steep increase in the creation of fake accounts on Facebook in the last six months.

Facebook estimates that fake accounts represented approximately 5% of their worldwide monthly active users (MAU) on Facebook during Q1 2019 and Q4 2018. Of course, this is nonsensical in light of both SCARS’ own estimates of a minimum of 25% and a recent report that showed it was closer to 50% «CLICK HERE TO READ»

Misrepresent a person’s identity by using a name that does not abide by our name policies, or by providing a false date of birth

Of course, we know that these are almost impossible to establish and report to Facebook Moderators.

Also if the “person” or profile engages in “inauthentic behavior,” which includes: creating, managing, or otherwise perpetuating 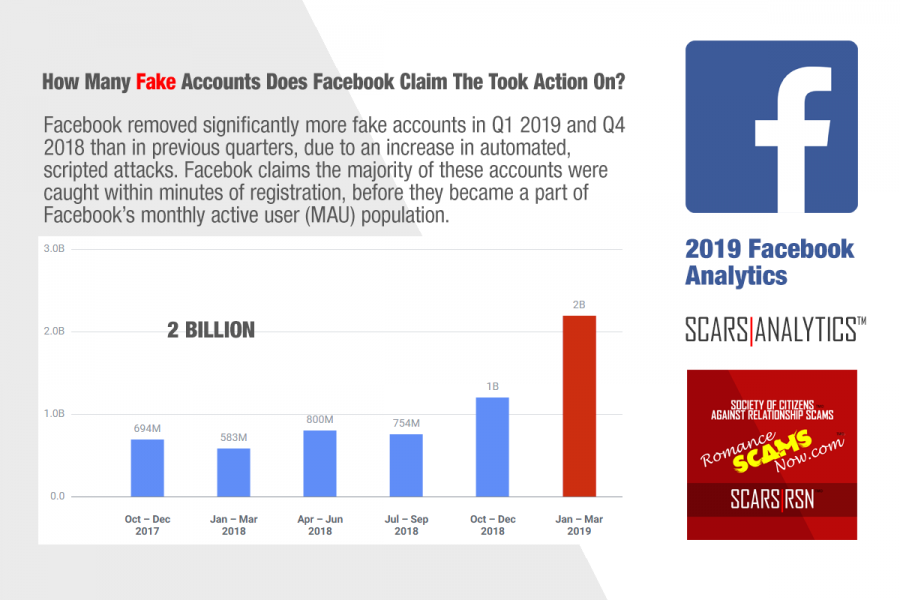 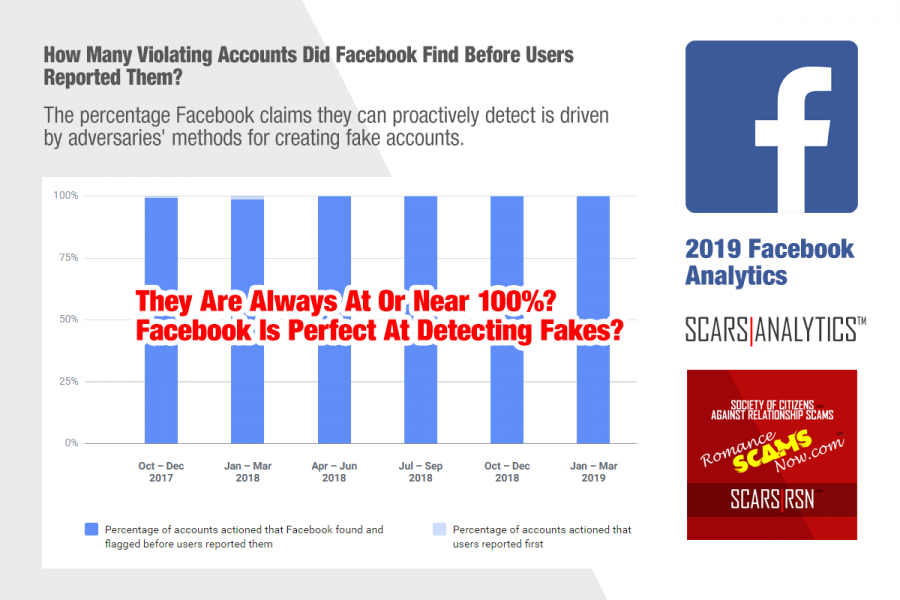 Remember that Facebook is playing a delay action to avoid being held responsible and liable for their vastly infiltrated platform. They need to keep the governments of the world away and believing it is not a big problem but ask any scam victim and they know the truth. For a long time, the tobacco industry played the same game until eventually – but it too 40 years – they were held responsible.

Additionally, Facebook has its own Anti-Scam “Advocate” promoting their cause, and even a couple of so-called anti-scam websites promoting Facebook position while pretending to help victims. Always be cautious of fake and amateur anti-scam groups because of this.

As always, we invite Facebook to work with us to solve this problem, but thus far no real response.

SCARS Editorial Team at Society of Citizens Against Relationship Scams Inc.
We are SCARS and we support scam victims worldwide! ••• The SCARS™ RomanceScamsNow.com™ website is one of the official victims' education & support publications of the Society of Citiz