SCARSSCARS SCARS - Society of Citizens Against Relationship Scams Inc. A government registered crime victims' assistance & crime prevention nonprofit organization based in Miami, Florida, U.S.A. SCARS supports the victims of scams worldwide and through its partners in more than 60 countries around the world. Incorporated in 2015, its team has 30 years of continuous experience educating and supporting scam victims. Visit www.AgainstScams.org to learn more about SCARS.™ Special Report: Facebook Moderators – The Weak Link

«Extracted from The Guardian – copyright acknowledge»

Facebook Moderators: A Quick Guide To Their Job And Its Challenges From The Guardian

Though Facebook has its own comparatively small in-house moderating team, most of them work for subcontractors. There are moderating hubs around the world, but Facebook refuses to disclose their exact number or locations.

Moderators get two weeks’ training plus prescriptive manuals devised by Facebook executives based at the company headquarters in Menlo Park, California.

It is these documents that have been leaked to the Guardian.

They show the breadth of the issues being dealt with by Facebook – from graphic violence to terrorism and cannibalism. If Facebook users are talking about a controversial issue, the company has to have a policy on it to guide moderators.

Facebook has automatic systems for rooting out extreme content before it hits the site, particularly on child sexual abuse and terrorism, but its moderators do not get involved in this proactive work. 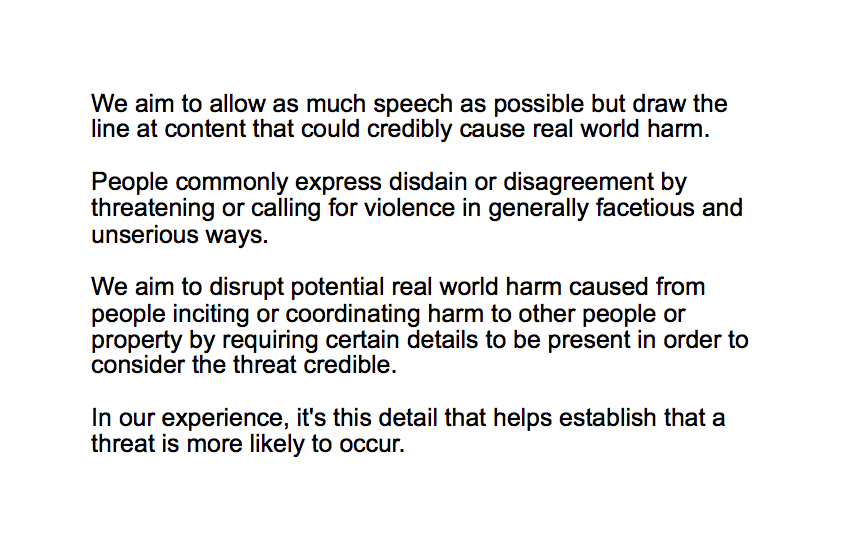 Instead, they review millions of reports flagged to them by Facebook users and use the manuals to decide whether to ignore, “escalate” or delete what they see. When they escalate a report, it usually means it is sent to a more senior manager to decide what to do.

This is particularly important when the content relates to potential suicides and self-harm, because Facebook has a team that liaises with support agencies and charities to try to get people help.

For comments that seem cruel or insensitive, moderators can recommend a “cruelty checkpoint”; this involves a message being sent to the person who posted it asking them to consider taking it down.

The files also show Facebook has developed a law enforcement response team, which deals with requests for help from police and security agencies.

The company has designed a special page to help moderators, called the single review tool (SRT). On the right-hand side of the SRT screen, which all moderators have, there is a menu of options to help them filter content into silos.

While this has speeded up the process of moderation, the Guardian has been told moderators often feel overwhelmed by the number of posts they have to review – and they make mistakes, particularly in the complicated area of permissible sexual content. 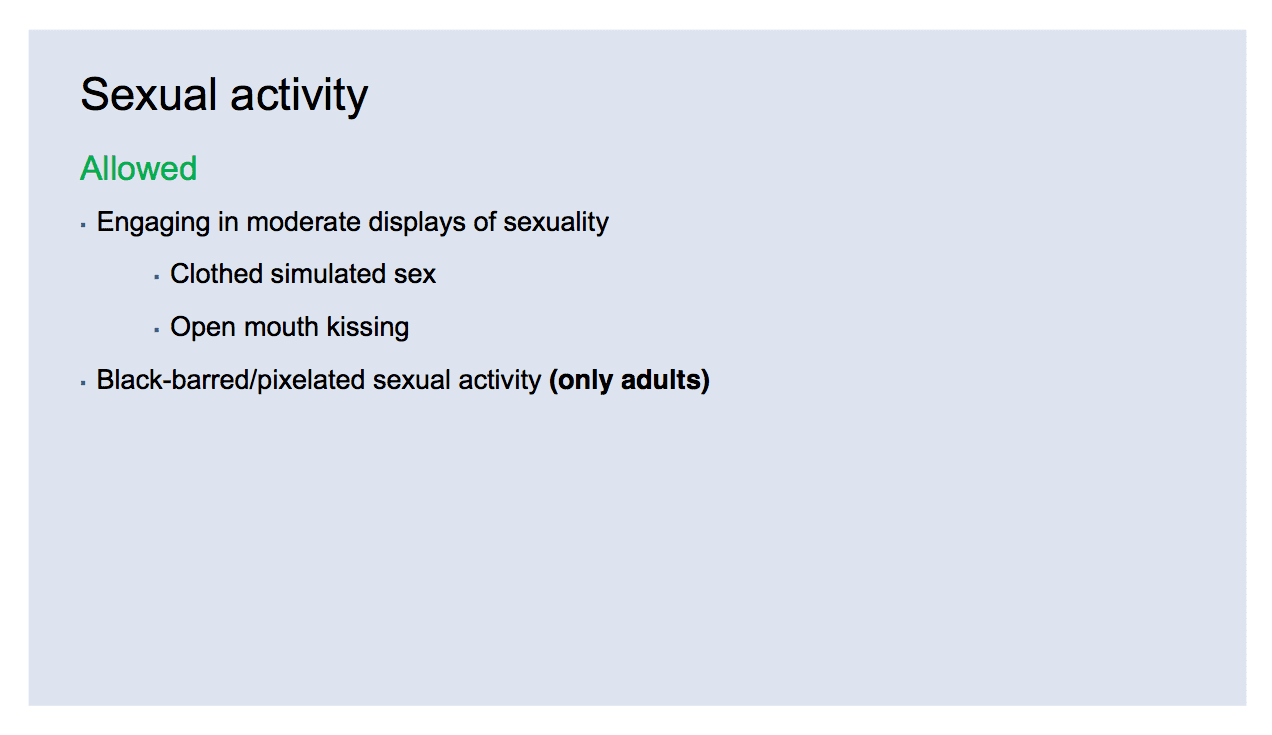 The manuals seen by the Guardian are occasionally updated – with new versions sent to moderators. But small changes in policy are dealt with by a number of subject matter experts (SMEs), whose job is tell moderators when Facebook has decided to tweak a rule. The SMEs also oversee the work of moderators, who have to undergo regular performance reviews.

The Guardian has been told this adds to the stress of the job and has contributed to the high turnover of moderators, who say they suffer from anxiety and post-traumatic stress.

Facebook acknowledged the difficulties faced by its staff and said moderators “have a challenging and difficult job. A lot of the content is upsetting. We want to make sure the reviewers are able to gain enough confidence to make the right decision, but also have the mental and emotional resources to stay healthy. This is another big challenge for us.”

There Are Even Guidelines On Sports Match-Fixing And Cannibalism

The Facebook Files give the first view of the codes and rules formulated by the site, which is under huge political pressure in Europe and the US.

“Facebook cannot keep control of its content,” said one source. “It has grown too big, too quickly.”

Many moderators are said to have concerns about the inconsistency and peculiar nature of some of the policies. Those on sexual content, for example, are said to be the most complex and confusing. 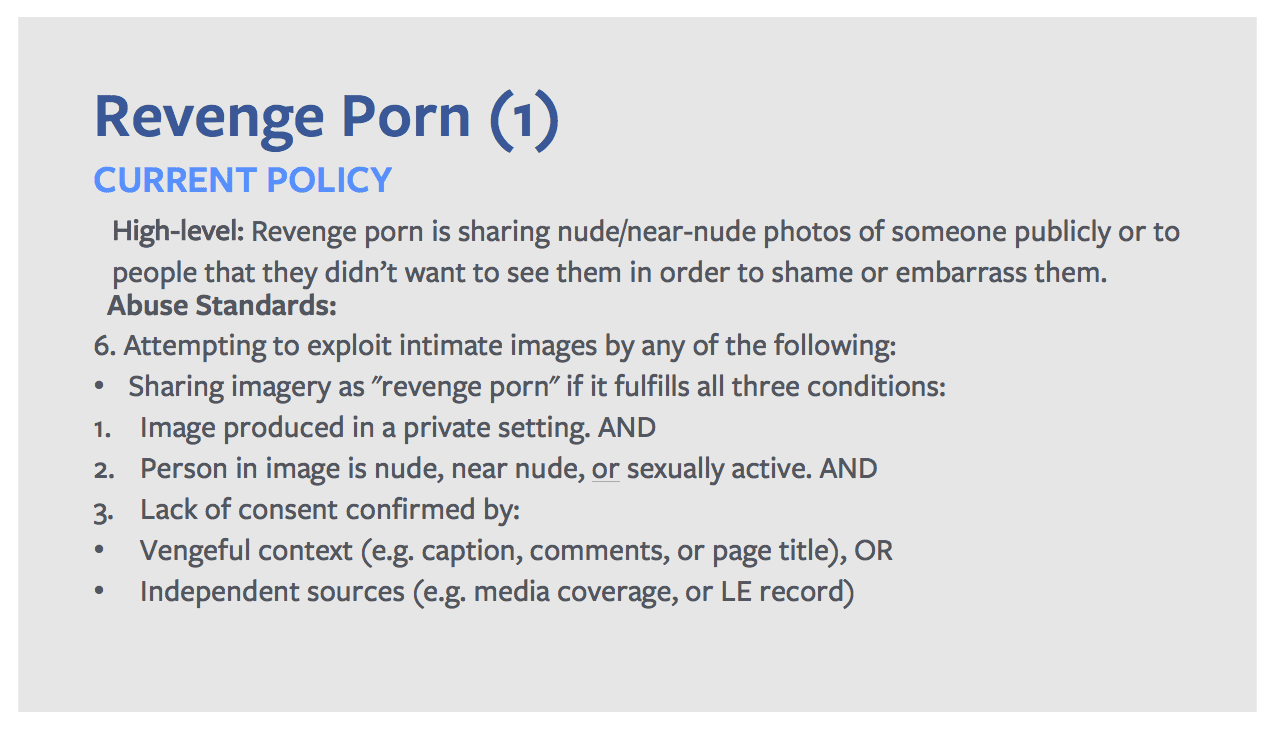 Using thousands of slides and pictures, Facebook sets out guidelines that may worry critics who say the service is now a publisher and must do more to remove hateful, hurtful and violent content.

Yet these blueprints may also alarm free speech advocates concerned about Facebook’s de facto role as the world’s largest censor. Both sides are likely to demand greater transparency.

The Guardian has seen documents supplied to Facebook moderators within the last year. The files tell them:

Other types of remarks that can be permitted by the documents include: “Little girl needs to keep to herself before daddy breaks her face,” and “I hope someone kills you.” The threats are regarded as either generic or not credible.

In one of the leaked documents, Facebook acknowledges “people use violent language to express frustration online” and feel “safe to do so” on the site.

It says: “They feel that the issue won’t come back to them and they feel indifferent towards the person they are making the threats about because of the lack of empathy created by communication via devices as opposed to face to face.

“We should say that violent language is most often not credible until specificity of language gives us a reasonable ground to accept that there is no longer simply an expression of emotion but a transition to a plot or design. From this perspective language such as ‘I’m going to kill you’ or ‘Fuck off and die’ is not credible and is a violent expression of dislike and frustration.”

It adds: “People commonly express disdain or disagreement by threatening or calling for violence in generally facetious and unserious ways.”

Monika Bickert, ‎Facebook’s head of global policy management, said the service had almost 2 billion users and that it was difficult to reach a consensus on what to allow.

“We have a really diverse global community and people are going to have very different ideas about what is OK to share. No matter where you draw the line there are always going to be some grey areas. For instance, the line between satire and humour and inappropriate content is sometimes very grey. It is very difficult to decide whether some things belong on the site or not,” she said.

“We feel responsible to our community to keep them safe and we feel very accountable. It’s absolutely our responsibility to keep on top of it. It’s a company commitment. We will continue to invest in proactively keeping the site safe, but we also want to empower people to report to us any content that breaches our standards.”

She said some offensive comments may violate Facebook policies in some contexts, but not in others.

Facebook’s leaked policies on subjects including violent death, images of non-sexual physical child abuse and animal cruelty show how the site tries to navigate a minefield.

The files say: “Videos of violent deaths are disturbing but can help create awareness. For videos, we think minors need protection and adults need a choice. We mark as ‘disturbing’ videos of the violent deaths of humans.”

Such footage should be “hidden from minors” but not automatically deleted because it can “be valuable in creating awareness for self-harm afflictions and mental illness or war crimes and other important issues”.

One slide explains Facebook does not automatically delete evidence of non-sexual child abuse to allow the material to be shared so “the child [can] be identified and rescued, but we add protections to shield the audience”. This might be a warning on the video that the content is disturbing.

Facebook confirmed there are “some situations where we do allow images of non-sexual abuse of a child for the purpose of helping the child”.

Its policies on animal abuse are also explained, with one slide saying: “We allow photos and videos documenting animal abuse for awareness, but may add viewer protections to some content that is perceived as extremely disturbing by the audience.

“Generally, imagery of animal abuse can be shared on the site. Some extremely disturbing imagery may be marked as disturbing.”

Photos of animal mutilation, including those showing torture, can be marked as disturbing rather than deleted. Moderators can also leave photos of abuse where a human kicks or beats an animal.

Facebook said: “We allow people to share images of animal abuse to raise awareness and condemn the abuse but remove content that celebrates cruelty against animals.”

The files show Facebook has issued new guidelines on nudity after last year’s outcry when it removed an iconic Vietnam war photo because the girl in the picture was naked.

It now allows for “newsworthy exceptions” under its “terror of war” guidelines but draws the line at images of “child nudity in the context of the Holocaust”.

Facebook told the Guardian it was using software to intercept some graphic content before it got on the site, but that “we want people to be able to discuss global and current events … so the context in which a violent image i