From the Federal Bureau of Investigation: Dangerous Connections – Youth Face A Massive Risk of Sextortion Online

One victim was a 14-year-old boy from West Virginia. Another victim from Michigan was only 12. Yet another was a 17-year-old girl from Ohio who attempted suicide in a desperate try to escape the situation.

In total, the FBI was able to identify 20 young people who were harassed, threatened, and sexually exploited online by an Indiana man who had served as a youth minister in his community.

When the FBI arrested Richard Finkbiner in April 2012, the 40-year-old had more than 22,000 videos of webcam feeds, much of it sexually explicit content that he had obtained from young people nationwide. Investigators believe he had dozens more victims that they could not identify, perhaps hundreds more.

The Finkbiner case is one in a long list of sextortion cases that have been investigated or prosecuted in the last two decades. FBI agents say more and more cases cross their desks each year involving young people who are manipulated, threatened, or coerced into creating explicit or pornographic content by an adult online.

The perpetrators employ gaming platforms, social media, and dating and video chat applications to reach their young victims and use any number of ploys—from pretending to be a romantic interest, flattery, and attention, offers of money or other items of value, or threats to coerce the child to produce an explicit image.

Once the perpetrator has a single image or video, they will use threats of exposure or other means of coercion to make the child produce more and more images and even more explicit material.

“The second the criminal gets a picture, that child’s life is going to be turned upside down,” said Special Agent Ryan Barrett, who worked on Finkbiner’s case from the FBI’s Indianapolis Field Office. “These people are relentless. They don’t care.”

Finkbiner sent his victims doctored but believable screenshots of their videos on pornographic websites when they refused to comply with his next demand; he also sent lists of friends and family taken from the young people’s social media accounts with threats to widely share their material. Seeing some of the messages Finkbiner sent his victims can help make clear how threatening and brutal these perpetrators can be:

“I wont get caught im a hacker i covered my tracks.”

Although in most sextortion cases there is no hands-on abuse, the offense is serious, the sentences for offenders are long (50 years in the Finkbiner case), and the impact on a child’s life severe.
Catherine Connell, a licensed social worker and child/adolescent forensic interviewer and program manager with the FBI, says she sees a number of damaging effects from the crime among the victims she works with, including depression, anxiety, hopelessness, fear, and suicidal thoughts. “The trauma level we see with these kids is significant,” said Connell.

To understand how and why young people become victims, it helps to understand the mind of a young person and the techniques used by criminals.

First, this crime is happening where young people usually feel most comfortable—in their own homes, connected to a device or a game that feels familiar and safe. “It’s important for both parents and children to realize that their guard is typically down when they’re engaging with their device,” said Supervisory Special Agent Brian Herrick, assistant chief of the FBI’s Violent Crime Section.

Second, young people are not adults. Connell stressed that however smart or mature a teen may seem, his or her brain is not fully formed. As they ride through what she calls a perfect storm of social, emotional, sexual, and cognitive development, they are making imperfect decisions. “Your teens are facing decisions with more emotion and less cognitive thinking and judgment,” she said. “They are not thinking, ‘If I do this, this is what may happen, this could be a consequence.’ ”

Finally, young people are up against criminals who have spent a great deal of time and energy learning how to target them. In the Finkbiner case, he used a fake profile of an older teen girl to start a conversation with adolescent and teen boys. He would then stream sexual images he had captured of a female victim and encourage the boy to send pictures or go on a webcam.
In a Portland case involving a 50-year-old perpetrator named David Ernest Otto, he found girls on a photo-sharing site who were open to the flattery, interest, and attention of an older man. He then convinced them to start sending sexually explicit material. He received a 15-year sentence in April 2019 for victimizing six minors.

In another case, a California man who is still awaiting trial threatened to kill, kidnap, and injure his victims to compel them to create content. His bomb threats to a teenage girl in Plainfield, Indiana, even caused police to shut down several schools and stores in 2015.

Herrick also says the FBI is seeing an increasing number of cases start on connected gaming systems, where the competition is intense and the offer of game credits or codes is enough to convince a child to create an explicit image.

Whatever technique pushes the young person to produce the first image, fear, coercion, and manipulation keep the crime going. In addition to the threats and coercion of the criminal, young victims often feel that they have done something wrong and will be punished by parents or caregivers or prosecuted by law enforcement if their actions are discovered.

Connell also stresses that as silly as it may seem to adults, the fear of being discovered and losing access to the technology that feels like a vital part of their lives is a serious concern. “The number one thing is they feel like they’re going to tell mom and dad and their technology will be taken away and they’re going to get in trouble,” said Connell. She also stressed that when the child knows there is photo and video evidence of their abuse, it makes it even harder to talk about.

The FBI agents and forensic interviewers who deal with this crime shared that if a child admits that they are experiencing this type of coercion, parents, educators, and caregivers should move first to help the child and try hard to put aside any anger or desire to punish.

“Your child’s bravest moment may be the moment they tell,” said Special Agent Damon Bateson, who worked on the Otto case and is dealing with other sextortion investigations in the FBI’s Portland Field Office. “You want to be your kid’s best advocate,” Bateson stressed. “Have those conversations so that if something does happen, your child comes to you for help. The last thing you want is someone from the FBI knocking on your door because your child has been victimized in a crime.”

“It’s important from the youngest age, when your child first starts using the Internet, that you have those open dialogue conversations about what’s appropriate,” said Herrick.

Parents and caregivers should make decisions for their family about screen-time rules and limits. Connell does feel regular spot checks and conversations about who your child is conversing with and what applications they are using can be important, but the nature of these ever smaller, ever more powerful, and ever-present devices mean children will have many unguarded and unsupervised moments online.

Barrett said that after dealing with many of these cases, he feels the most important messages to young people are simple ones: 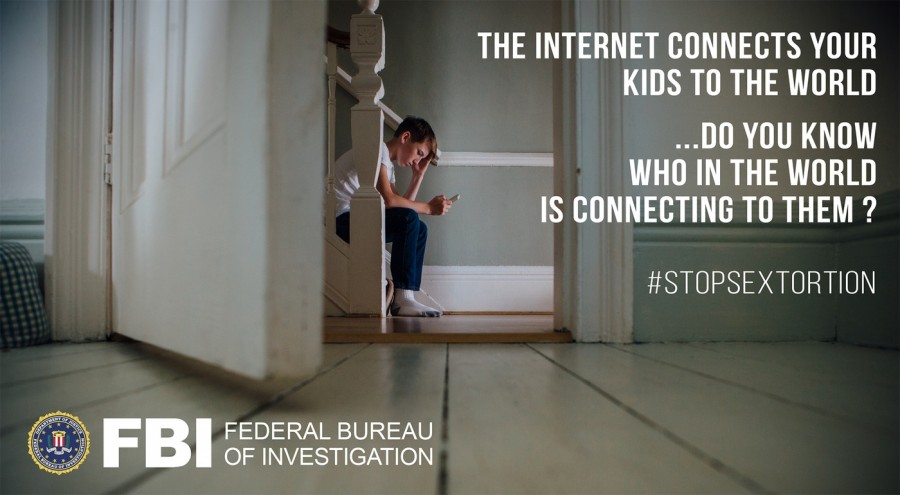