RSN™ ScamScam A Scam is a confidence trick - a crime -  is an attempt to defraud a person or group after first gaining their trust through deception. Scams or confidence tricks exploit victims using their credulity, naïveté, compassion, vanity, irresponsibility, or greed and exploiting that. Researchers have defined confidence tricks as "a distinctive species of fraudulent conduct ... intending to further voluntary exchanges that are not mutually beneficial", as they "benefit con operators ('con men' - criminals) at the expense of their victims (the 'marks')". A scam is a crime even if no money was lost. News: Nigerian Police Arrest 21 Scammers

21 suspected Yahoo Boy criminals were arrested by a team of police detectives at the Delta State Police Command, Asaba, in a renewed raid on brothels and hotels across the state, following the increasing cases of ritual killings in the state. The arrests were performed in the early hours of November 23, 2018 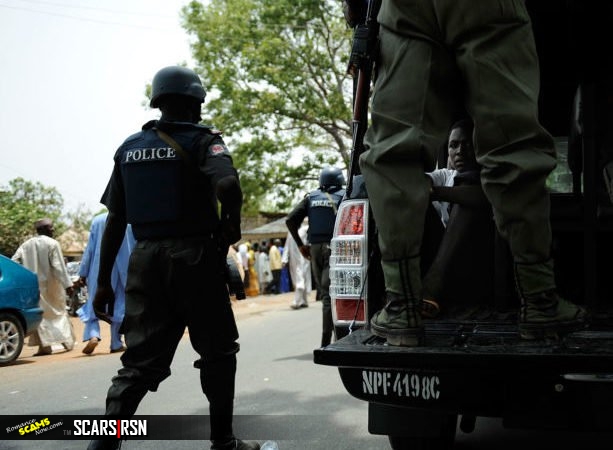 The Commissioner of the Nigerian Police in Delta State, Mustafa Muhammad, confirmed the arrest of the suspects, said the renewed raids was triggered by the increasing rate of ritual killings by Yahoo Boy scammers as well as armed robbery operations across the state, especially as the crimes are often being executed in hotels, guest houses, and brothels.

Muhammad, who spoke to journalists in Asaba, said, “Many of the ‘Yahoo, Yahoo boys’ we have arrested, were picked in either in the brothels, hotels, and guest houses and recently there have been reported cases of ritual killings that are currently being investigated.

“While over ten suspected cultists and armed robbery suspects have been arraigned in court.  This was to reduce these incidences. Our officers and men were given matching orders to raid all the hotels, brothels and guest houses.”

He added that the arrested suspects will be charged in court upon completion of the investigation.

The Police Detectives raided the brothels in Okpanam, Ibusa Asaba Nnebisi road and Summit roads. These areas are often a beehive of activities of alleged Yahoo, Yahoo boys and armed robbers, including prostitutes who use prostitution to rob their unsuspecting customers.

For close to two months, residents across the state have been living in palpable fear of the unknown activities of the Yahoo Boys – particularly with the increasing cases of ritual killings and armed robbery cases in the state.

The police commissioner said, “through our intelligence gathering, we observed female cleaners reported their bitter experiences to the proprietors of their hotels, as in most cases guests allegedly kill their victims in their hotel rooms and dumped their corpses on the floor, some of the hotels’ proprietors have been arrested and granted bail. We are investigating many cases and very soon we will bring many of the criminals to book”.

He further stated that 10 female prostitutes were arrested during the raid for allegedly aiding criminals in their brothels, adding that, “the suspects upon interrogation, have made useful statements to the police. Investigation is ongoing and on completion of investigation, the suspects will be charged to court”.

The Commissioner of Police then called on the people of Delta to continue to provide useful information to the police with a view to arresting criminals troubling the state.