“The Justice Department and its partners are taking unprecedented, coordinated action to protect elderly Americans from financial threats, both foreign and domestic …”

He went on to state: “When criminals steal the hard-earned life savings of older Americans, we will respond with all the tools at the Department’s disposal – criminal prosecutions to punish offenders, civil injunctions to shut the schemes down, and asset forfeiture to take back ill-gotten gains … I have directed Department prosecutors to coordinate with both domestic law enforcement partners and foreign counterparts to stop these criminals from exploiting our seniors.”

The mission of the Elder Justice Initiative is to support and coordinate the Department’s enforcement and programmatic efforts to combat elder abuse, neglect and financial fraud and scams that target our nation’s seniors. We engage in this work by focusing on the following mission areas:

Promoting foundational research into elder abuse and financial exploitation in order to transform the practice of professionals in ways that positively impact the lives of older adults.

Helping Older Victims And Their Families:

Connecting older adults and their families or caregivers with appropriate investigative agencies, as well as empowering them with information about abuse and recovering from its effects.

SCARS, though its relationships with the U.S. Department of Justice and elected officials as active in helping to guide the future legislation on this issue. In addition, our SCARS Member Debbie Montgomery has appeared before Congress to give testimony on this topic of so much concern to all.

We encourage all seniors to recognize that it has been this CURRENT administration that has made real progress in the last two years on global online fraud.

Please keep in mind that the Trump Administration has made a huge commitment to stopping cybercrime, The previous party in power permitted no real progress. Keep this in mind when you vote in the upcoming elections this fall.

SCARS does not financially support any candidate. We endorse those with a proven track record in addressing meaningful cybercrime initiatives. We are supporters of online Law & Order!

In 2017, the IC3 received 49,523 complaints from victims over the age of 60 with adjusted losses in excess of $342 million. – Of course, like all IC3 reporting this represents far less than 3% of the total actual cases and financial losses.

Washington, D.C. — According to the Government Accountability Office, financial fraud targeting older Americans is a growing epidemic that costs seniors an estimated $2.9 billion annually. Seniors often do not report fraud because they do not know where to report it, are too ashamed to admit they have been scammed, or may not even know that they are victims. One of the top priorities of the Senate Aging Committee is to combat scams that target older Americans.

“This Committee’s dedication to fighting fraud against older Americans is raising awareness and it is making a real difference,” said Senator Collins. “Just two weeks ago, the Department of Justice announced it has charged more than 250 people with stealing more than a half billion dollars from more than a million Americans. This is the largest ever law enforcement action to protect our nation’s seniors from fraud.”

“It is our sacred responsibility to help keep seniors safe from scams and we must take aggressive action to ensure that not one more senior loses another penny to a con artist,” said Senator Casey.

“I will continue to ensure that law enforcement has the resources necessary to punish perpetrators and we must strengthen our work with businesses to ensure they are another line of defense to help prevent assets from ever leaving the hands of unsuspecting victims.”

“We know that fraudsters use technology to target older people but, increasingly, we’re seeing people of all ages affected,” said AARP CEO Jo Ann Jenkins. “This bipartisan effort to prevent senior scams is an important step in the ongoing battle to protect Americans of all ages from fraud. AARP thanks the Senate Aging Committee, especially Senators Collins and Casey, for their excellent work focusing on this crucial issue.”

Stephen and Rita Shiman from Saco, ME, a couple who fell victim to a grandparent scam and now educate the public about their experience, spoke about the emotional and convincing nature of these scams. During his testimony, Mr. Shiman said, “Indeed, there is a special bond between grandparents and their grandchildren. The scammers knew this well and took full advantage of it with my wife and myself. They knew that when a grandchild is in trouble, grandparents go all out to help.”

Mary Bach from Murrysville, PA, spoke about her work over the past 20 years as a lead volunteer with Pennsylvania AARP, chairing their Consumer Issues Task Force. She explained how her task force team consists of 15 volunteer members from across the commonwealth who are enthusiastic about educating people of all ages, but especially seniors, about current scams. Ms. Bach also highlighted AARP’s Fraud Watch Network, a nationwide program that warns seniors about scams. Consumers can sign up at aarp.org/fraudwatchnetwork.

Doug Shadel, the State Director of AARP Washington State testified about the current state of fraud targeting seniors and outlined that impostor scams are still the most prevalent. In the new age of technology, it is easier than ever for scammers to be someone they are not. Combining this ability with a tactic to incite fear or excitement upon their victim, paints a very convincing picture, one that has robbed many seniors of their hard-earned savings.

Adrienne Omansky from Los Angeles, CA, described how she formed the Stop Senior Scams Acting Program in 2009 after a discussion with the students in her commercial acting class about fraud they had experienced. Over the past few years, this volunteer group has grown significantly and performs in about 30 venues each year, from small veterans halls to the convention center. As part of her testimony, Ms. Omansky also showed a few clips of the PSAs her group has recorded. Ms. Omansky shared several of the lessons the members of her acting program have learned through their performances, including that seniors are often more comfortable learning about scams from their peers. 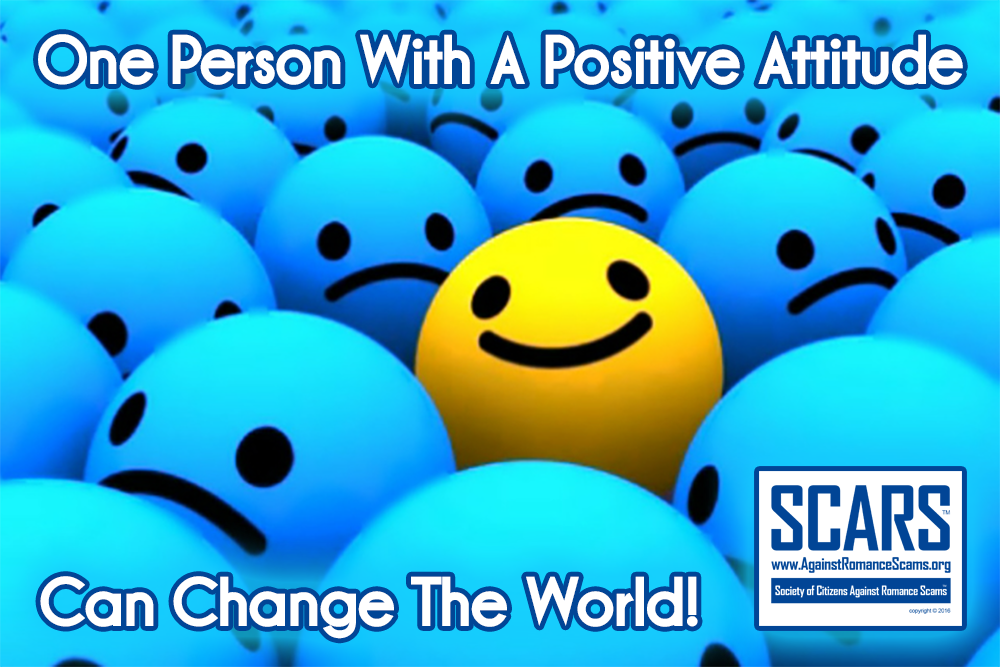 One Person With A Positive Attitude Can Change The World! We Try Every Day!