As EFCC Intensifies Clampdown Scammer Crawl Back In Their Holes 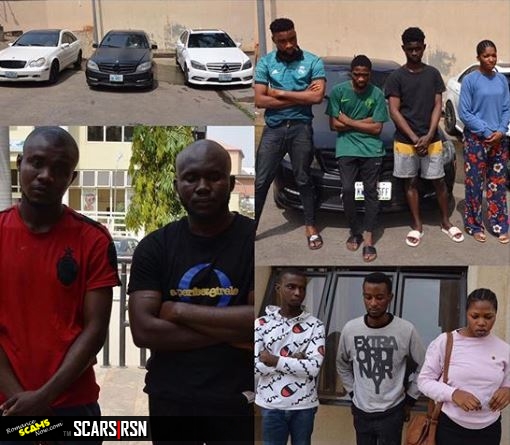 Suspected internet fraudsters arrested in Abuja by the EFCC

Per The Nigeria Press:

One of the largest cities in West Africa, Ibadan of late has become a safe haven for Yahoo Boys taking refuge in the suburbs of the city of brown roofs.

Internet fraudsters in Ibadan, Oyo State popularly regarded as ‘Yahoo Boys’ or ‘G-Boys’ have been going into hiding as the foremost anti-graft agency in Nigeria – Economic and Financial Crimes Commission continues its massive raid of their hide-outs.

The EFCC stemmed up its harvest of the fraudsters across Nigeria with series of arrests recorded in Ibadan, Abuja, Lagos, Port Harcourt, Ilorin, Benin and other major cities in the country this year thereby unsettling the scammers living flamboyant lives.

One of the largest cities in West Africa – Ibadan, of late has become a safe haven for Yahoo Boys taking refuge in the suburbs of the city of brown roofs.
The story seems to be different this year as agents of the EFCC have been raiding the fraudsters at different locations with their suspected proceeds of fraud seized from them before subsequent arraignment in court.

A panicky source told Tori News he has been keeping a low profile to avoid the prying eyes of the EFCC.

“I have parked my car at a safe place. I’m not using it until the EFCC reduces its tempo of arrests. I can’t even use the bank to obtain money from my clients. I have also being avoiding beer parlours because one doesn’t know who is who presently.” he said.

Tori News was also informed that some Yahoo Boys have been taking up menial jobs temporarily to hoodwink the EFCC operatives who they believe are operating undercover in Ibadan.

Another source named Gabriel (not real name) revealed how he has been unable to drive the fairly used multi millionaire Honda Crosstour he just purchased with his loot.

“I can’t drive my new car around town. The street is not safe for now. These guys (EFCC operatives) are ruthless. They will seize all your properties and still parade you. I can’t stand the disgrace of having my pictures on social media pages and blogs with the tag of a ‘Yahoo Boy’. In fact, I don’t leave my house unless the reason is important. That’s how we are surviving now” he concluded.

Another fraudster, a young man in his late 20s who doubles as a music record label owner complained to a Tori News correspondent that the ‘fraud deals’ have been slow of late due to the activities of the EFCC officials. He alleged they seem to be working in concert with members of the controversial Special Anti Robbery Squad, SARS or prostitutes popularly regarded as ‘Oloshos’ in intelligence gathering.

“These EFCC guys are not joking; the raids are done with so much accuracy. The house they raided around the Ologuneru area last week is very close to mine. I almost rented an apartment there but I changed my mind. Just last week, I was apparently running helter skelter with my friend because they were at strategic locations in town and we had to avoid them” he said.

Most of the Yahoo Boys this paper contacted believe the heat is nothing but a ‘momentary madness’ which the EFCC can’t sustain.

“We have seen this before now, it happened early last year in Lagos and many of my friends had to leave the Island area to avoid arrest and asset seizure. Today, the guys have returned to their homes and they are working freely.”one young man named Haruna said.

Haruna revealed that they expect the war on Yahoo Boys to wind down in two months time. He went on to explain that the officials of the anti-corruption agency are hard to ‘negotiate’ with.

“Its very difficult to bribe these guys. They will dig out everything you are hiding. Even if they will set you free, they will make sure they strip you naked financially” he added.

Rumours making the round in Ibadan revealed the EFCC arrested one popular and established Yahoo Boy named Leke and rendered him bankrupt.

5 exotic cars, over N100 million and his house in Lagos State were allegedly confiscated after investigation. The former ‘poster boy’ who purportedly slept with ladies at will is presently moving around town on commercial motorcycles as he is completely broke.