RSN™ Guide: What Is The Relationship Between Scammer And Victim?

Home/RSN™ Guide: What Is The Relationship Between Scammer And Victim?
Previous Next

RSN™ Guide: What Is The Relationship Between Scammer And Victim?10 min read

RSN™ Guide: What Is The Relationship Between Scammer And Victim?

It Is The Relationship Between Predator & Prey!

Originally published by RSN in April 2016, and updated September 2018

Unfortunately, The Predators Have Been Winning For Decades!

A predator is an organism that eats (or preys) another organism. The prey is the organism which the predator eats.

Some examples of predator and prey are lion and zebra, bear and fish, and fox and rabbit. The words “predator” and “prey” are almost always used to mean only animals that eat animals, but the same concept also applies to plants: Bear and berry, rabbit and lettuce, grasshopper and leaf.

It Also Applies To Humans, Such As Criminal And Victim

There are also other influences that can determine if predators or prey survive. These include other predators, other varieties of prey, as well as external influences.

With the explosion of the internet, online predators have increased their populations exponentially. Today, it is estimated that there are over 100,000 Romance Scam Predators out there in Africa alone, and likely that number will double in the next decade. These predators are in almost every country, though they prosper in the more lawless places of the world. However, the real concentration is in Africa and Africans living in other countries. Though China and India are also huge concentrations as well.

Unfortunately, the victims (the prey) are not evolving rapidly enough. There is no balance between the scammers and the victims, the scammers have been winning since the beginning. The only limitation was access to the Internet for both predator and prey. Eventually, there would have to come a reduction in scammers, but these would simply be the more inefficient ones (the slower ones), leaving the more efficient super-scammers (this is largely what we are seeing today with the smaller gangs being arrested and the corporate cartels thriving).

Outside influences have to play a major role. Law enforcement was largely absent from this equation under the Obama Administration. Only a handful of the most obvious scammers got captured – in fact only about 400 scammers were arrested between 2008 and 2016. This needed to go up many orders of magnitude to contain any realistic predator population control. Fortunately, this is exactly what we have been seeing since the change in the United States Presidency and 2018 especially with the arrest worldwide of over 6,000 scammers year to date!

Just two years ago, there was no good news in sight. The scammers were going to continue to expand their numbers with ever greater success until two things happened. One is that the environment changes. The other is that the victims (or potential victims) change. However, what we saw was that the environment changed – scammers and victims remained the same, but a predator of predators was finally introduced into the ecosystem in the form of serious law enforcement worldwide!

The environment did take a while, and it took a change in the will of society to finally do something about these abuses. Many things are finally coming together to effect this. Greater controls on international money transfers. Vastly increased law enforcement globally – in China alone in June over 1,300 scammers were arrested. Larger and more coordinated data clearinghouses (SCARS is continuing to invest in theirs). De-anonymizing social media and all communications are essential to re-establishing authenticity. However, some of these are long-term changes that will take a decade at least.

One bright spot is the probability that aspects of the Internet and specifically social media are finally going to be regulated. The law that permitted it all – good and bad – the Communications Decency Act will also be revised imposing more liability on to the owners of platforms such a Facebook.

The tide has turned, but voters can easily undermine all of this work by voting for socialists that despise law enforcement and want everyone to be a victim (this is their real meaning – that each of us is alone and unable to protect ourselves – so their big government must do it for us). How your vote in 2018 in the U.S. elections will be the difference between continuing what has begun in the last two years, or turning around and going back to 100% growth in scamming per year! Yes, we need a bigger role by the government, but actually, we just need the environment re-leveled so that collectively we can control these online predators.

So What Does That Mean For Victims?

For Victims To Change, It Requires A Change In Their Online Attitudes More Than Anything

Far too many victims believe it is somebody else’s problem. Or that somebody else has to save them. Even after they become victims, the vast majority do nothing about it.

If you do nothing before, during, and after, the scammers just get better and fatter. If you evolve to avoid them, and you actively help others do the same, then you deny “food” to the scammers and their numbers will reduce. Ironically, this is called Capitalism – supply and demand. You reduce the demand by reducing the supply of victims!

This Is Really Your Choice

Victims (and potential victims) can remain cattle for the scammers, or become aggressive, grow horns (tools and weapons), and become largely immune to the scammer’s techniques.

We and other victims advocate groups are doing all we can to help you learn and evolve, but this is totally up to you to take advantage of what is offered. You need to learn and change, and become an advocate for others yourself. Find other local victims, form a social group and meet face to face. Discus what you can do and how you can help, this is how it is done. Just clicking LIKE does nothing.

If You Really Want To Help There Are Things You Can Do Today!

SCARS offers through the United States Department of Homeland Security a full course on becoming a Crime Victims Advocate to help other victims at the local level. It is free for anyone interested, but you have to commit a dozen or so hours to take and complete the course. In addition, the National Organization for Victims’ Assistance offers a Certification for those that pass the DHS Course. This means you can connect with your local police department of offer help to any other victims they encounter. We are developing a directory for local advocates to help other victims through the process.

SCARS is also developing its SCARS Ambassador program for local SCARS Chapters. This will enable advocates to reach out to their local community to provide lectures and training to help people in your community to avoid scams or recover from them more effectively.

This is not about becoming a vigilante, it is about saving lives!

Join us in reducing and disrupting scammer activities on Facebook and Instagram. We have a process that works. It is not about getting scammers arrested, it is about disrupting their communications with victims and potential victims. For every Fake profile that is removed, it can save a dozen victims. Join our Anti-Scam Army™ on Facebook and learn how to do it properly, join here: https://www.facebook.com/groups/RSN.Army/

By becoming a SCARS Member (for free) you add your voice to the hundreds of thousands of other survivors who are SCARS Members when we go to governments around the world to demand action! Governments listen to SCARS now because of our members! Go to www.AgainstScams.org to join for free! Also, contact your employer about becoming a Corporate Member of SCARS as well and taking a stand against cybercrime and in the protection of their own employees!

We sincerely thank you for your continuing support! 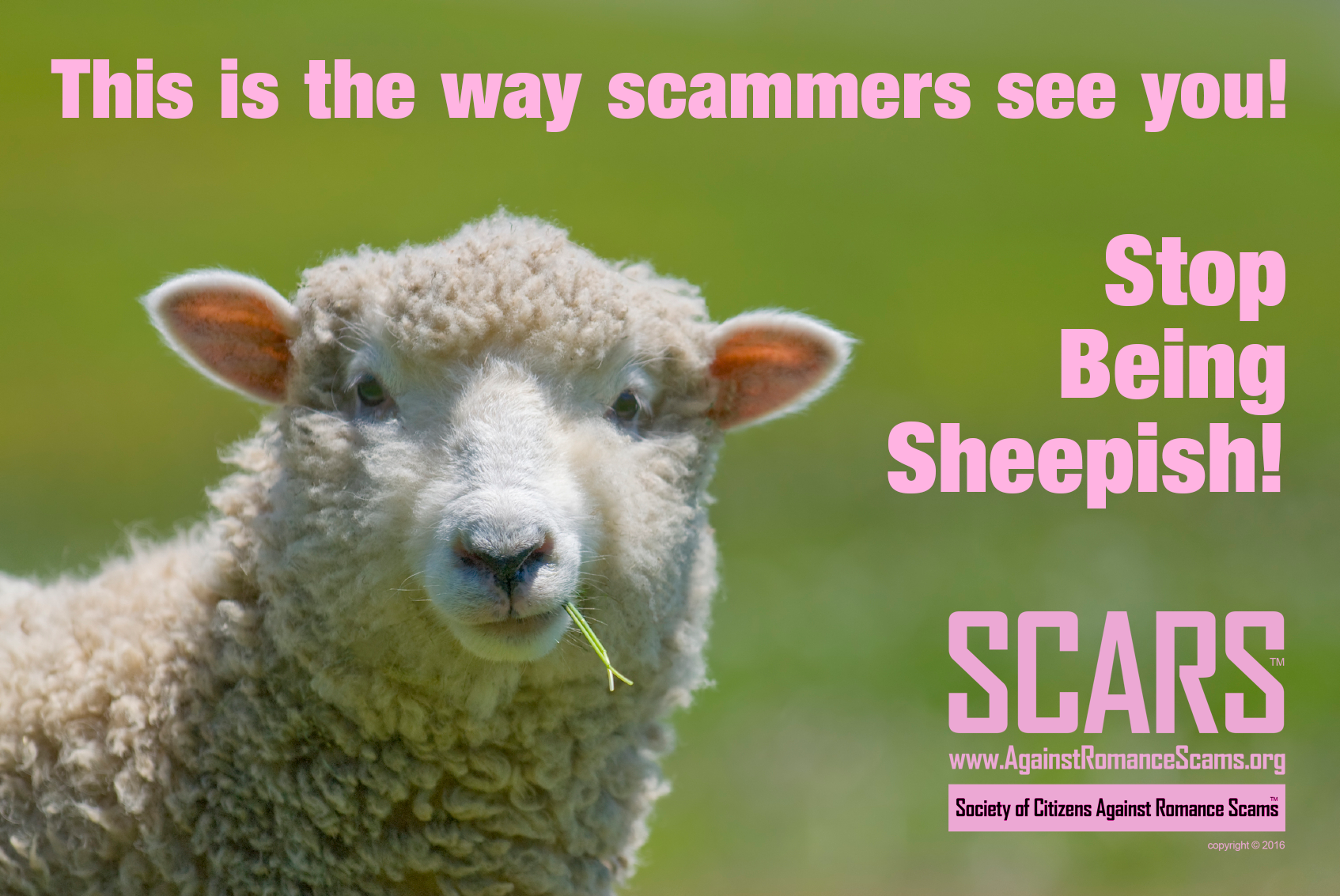 Don’t Be Sheepish With Scammers!