Home/SCARS™ Major Scam & Scamming News: Famous Nigerian Prince Arrested Along With A Total Of 80 Scammers With $46 Million
Previous Next

Famous Nigerian Prince Arrested with $46 Million: The relationship between a Japanese woman and a U.S. Army captain stationed in Syria started online, through an international social network for digital pen pals. It grew into an internet romance over 10 months of daily emails.

Federal agents hold a detainee, center, at a downtown Los Angeles parking lot after predawn raids that saw dozens of people arrested in the L.A. area Thursday, Aug. 22, 2019. U.S. authorities have unsealed a 252-count federal grand jury indictment charging 80 people with participating in a conspiracy to steal millions of dollars through a range of fraud schemes and laundering the funds through a Los Angeles-based network. The U.S. Attorney’s Office says Thursday most of the defendants are Nigerian nationals. (AP Photos)

It ended with the woman $200,000 poorer and on the verge of bankruptcy after borrowing money from her sister, ex-husband, and friends to help Capt. Terry Garcia with his plan to smuggle diamonds out of Syria.

In reality, there were no diamonds and there was no Garcia they were part of an elaborate scam hatched by an international ring of cyber thieves operating mainly out of Los Angeles and Nigeria.

Federal authorities cited the case of the Japanese woman, known only as “F.K.” in court papers, on Thursday when they announced an indictment charging 80 people with stealing at least $46 million through various schemes that targeted businesses, the elderly and anyone susceptible to a romance scam. Most of the defendants are Nigerians.

“We believe this is one of the largest cases of its kind in U.S. history,” U.S. Attorney Nick Hanna told a news conference. “We are taking a major step to disrupt these criminal networks.”

The investigation began in 2016 with a single bank account and one victim, said Paul Delacourt, assistant director in charge of the FBI’s Los Angeles office. It grew to encompass victims who were targeted in the U.S. and around the world, some of whom like the Japanese woman lost hundreds of thousands of dollars.

“F.K. was and is extremely depressed and angry about these losses,” the federal complaint states. “She began crying when discussing the way that these losses have affected her.”

Her relationship began innocently in March 2016 with an email but soon “Garcia” made “romantic overtures,” according to federal authorities. He told her they couldn’t talk by phone because he wasn’t allowed to use one in Syria.

So a stream of emails went back and worth, with her using Google to translate his English into her Japanese. A month into the relationship, Garcia told her he’d found a bag of diamonds in Syria and he began introducing her to his associates, starting with a Red Cross representative who told her Garcia had been injured but had given him the box.

F.K. ultimately made 35 to 40 payments, receiving as many as 10 to 15 emails a day directing her to send money to accounts in the U.S., Turkey and the United Kingdom through the captain’s many purported associates.

The fraudsters even threatened her with arrest if she did not continue to pay and at one point she traveled to Los Angeles because she was told a Russian bank manager had embezzled more than $33,000 of her funds.

Authorities arrested 14 defendants Thursday, mostly in the Los Angeles area. FBI agents could be seen processing suspects in a downtown Los Angeles parking lot before they were arraigned in federal court. It was not immediately known if they had attorneys who could speak on their behalf. 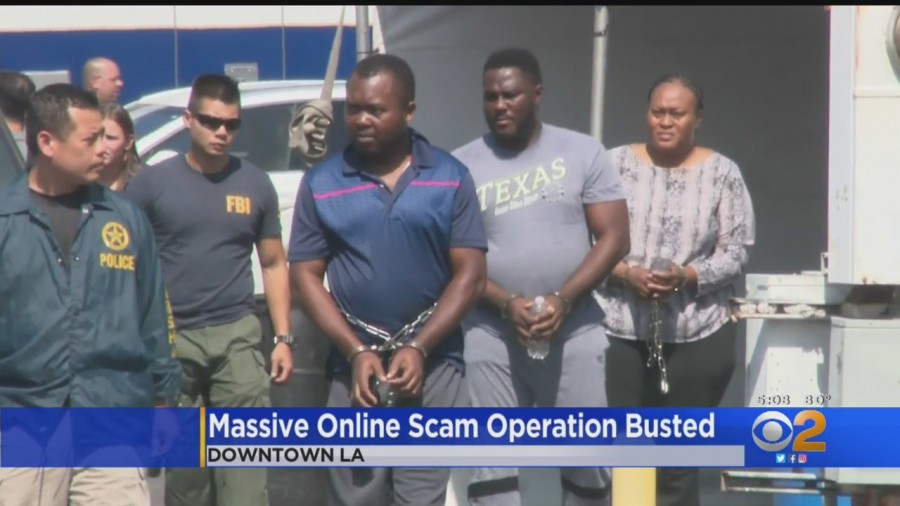 MORE ABOUT THIS STORY:

Federal agents are on the hunt for suspected con artists in one of the biggest scams the country has ever seen. Eighty were indicted in the U.S. and overseas.

Cameras caught nearly a dozen arrests near Los Angeles as part of a worldwide operation to take down the alleged email scammers. Most arrested were Nigerian nationals who allegedly preyed primarily on elderly victims, with low tech offers to send money.

According to the indictments, the schemes used online romances and fake business emails to steal at least $6 million and overall attempted to take an additional $40 million from victims in the U.S. and across the globe.

Federal officials have been sounding the alarm on the increasing fraud, creating public service announcements.

In 2012, the SCARS Advisory Board Member Debby Montgomery Johnson fell victim to an online scam involving a Nigerian scheme. It cost her much of her life savings.

“He broke my heart, and my head went with it,” she said.

Romance scams have become a huge part of online corruption and the crackdown was just a small slice. According to the Federal Trade Commission, victims lost $143 million in romance schemes last year. That’s more than any other type of fraud reported to the federal government. However, per SCARS data, this is a gross underestimation, since only 3-5% of scam victims will report these crimes, so the real amount is at least 20 times larger. 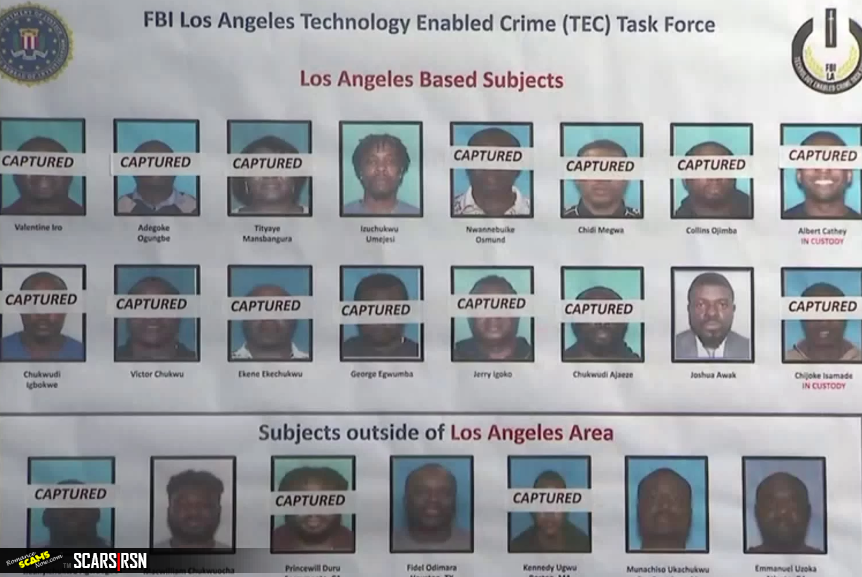 80 indicted in online fraud scheme that stole millions across the U.S.

80 Defendants In U.S. And Nigeria Charged In Cyberfraud Conspiracy To Steal Millions

After search warrants were executed at multiple locations across L.A. County on Thursday morning, federal prosecutors announced a 252-count indictment that accuses 80 people in the U.S. and Nigeria of participating in a “massive conspiracy to steal millions of dollars through a variety of fraud schemes.”

The defendants allegedly laundered the funds through a Los Angeles-based money laundering network. Eleven of them were arrested Thursday in Southern California, while three others were taken into custody elsewhere in the U.S., according to the U.S. Attorney’s Office for the Central District of California.

Two were already in federal custody on other charges, and one was arrested earlier this week. The remaining defendants are believed to be abroad, most of them in Nigeria, authorities said.

According to the indictment, the accused used business email compromise frauds, romance scams and schemes targeting the elderly to defraud victims out of millions of dollars.

The co-conspirators allegedly contacted Valentine Iro, 31, of Carson, and Chukwudi Christogunus Igbokwe, 38, of Gardena, both Nigerian citizens, for bank and money-service accounts that could receive funds fraudulently obtained from victims.

“These victims are used primarily as money mules, by allowing their bank accounts to be used to transfer stolen funds,” said FBI Assistant Director in Charge Paul Delacourt.

The criminal complaint says Iro and Igbokwe, who were among the suspects arrested Thursday, conducted schemes that resulted in the transfer of at least $6 million in fraudulently obtained funds.

“The overall conspiracy was responsible for the attempted theft of at least $40 million,” the U.S. Attorney’s Office said in a statement.

OFFICIAL COMMENT FROM NIGERIA: The EFCC To Help FBI Fish Out Nigerians Indicted In $46M Fraud In Us – According To EFCC Director Magu

EFCC Boss, Ibrahim Magu, Said The Commission Will Work With The FBI To Investigate Nigerians Indicted In A $46 Million Fraud Case In The US 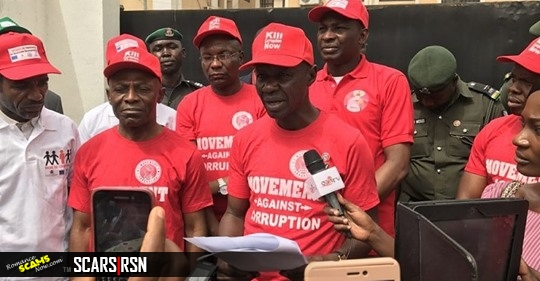 The EFCC Chief, However, Said The FBI Has Not Yet Reached Out To The Commission Over The Fraud Case

The acting chairman of the Economic and Financial Crimes Commission (EFCC), Ibrahim Magu, says the commission will collaborate with the Federal Bureau of Investigation (FBI) to the Nigerians indicted in a $46 million fraud case in the United States. The fraudsters, majority based in Nigeria, were, according to FBI, involved in a series of coordinated internet scam obtained from victims in the United States and other parts of the world.

The American security agency on Thursday, August 22 said 14 of the suspects had been arrested while the remaining defendants were “believed to be abroad with most of them located in Nigeria.”

Following the release of the names of all the Nigerians indicted in the fraud case, ThisDay newspaper, citing anonymous sources on Friday, August 23, said the EFCC boss met with a select team at the headquarters in Abuja, to strategize on how to arrest the Nigeria-based members of the fraud syndicate.

Meanwhile, speaking at the EFCC headquarters in Abuja also on Friday, Magu reportedly confirmed that the agency had commenced an investigation into the matter. He said the commission was investigating to ascertain the involvement of Nigerians who collaborated with the ones indicted in the US.

“We will investigate it and we will leave no stone unturned. We will go after those who collaborated with the one