SCARS™ Scam News: Yahoo Boys Say “We Want To Quit, But It Is Not Easy”

SCARS RomanceScamsNOW.com Home | SCARS™ Scam News: Yahoo Boys Say “We Want To Quit, But It Is Not Easy”
Previous Next

SCARS™ Scam News: Yahoo Boys Say “We Want To Quit, But It Is Not Easy”

SCARSSCARS SCARS - Society of Citizens Against Relationship Scams Inc. A government registered crime victims' assistance & crime prevention nonprofit organization based in Miami, Florida, U.S.A. SCARS supports the victims of scams worldwide and through its partners in more than 60 countries around the world. Incorporated in 2015, its team has 30 years of continuous experience educating and supporting scam victims. Visit www.AgainstScams.org to learn more about SCARS.™ ScamScam A Scam is a confidence trick - a crime -  is an attempt to defraud a person or group after first gaining their trust through deception. Scams or confidence tricks exploit victims using their credulity, naïveté, compassion, vanity, irresponsibility, or greed and exploiting that. Researchers have defined confidence tricks as "a distinctive species of fraudulent conduct ... intending to further voluntary exchanges that are not mutually beneficial", as they "benefit con operators ('con men' - criminals) at the expense of their victims (the 'marks')". A scam is a crime even if no money was lost. News: Yahoo Boys Say “We Want To Quit, But It Is Not Easy”

The Saga Of Poor Yahoo Boys That Want Out!

In an interview, they opened up about their wealth and the source of it. They said they have millions of dollars in the bank, some of which they have used to buy the latest cars, build costly mansions and acquire many good things of life. However, they confessed that their lives are characterized by pain and sorrow because of ritual sacrifices they have to perform every month. One of them, Abudu, 34, said although he has over $2 million dollars in his account and a six-bedroom mansion at Kasoa in the Central Region, his life is miserable, because of every five weeks, the spiritualist who made him wealthy orders him to perform a task. He said the “easiest” of the tasks is to sleep with 70 dark-skinned girls in a month and take their v*** fluids to the spiritualist. 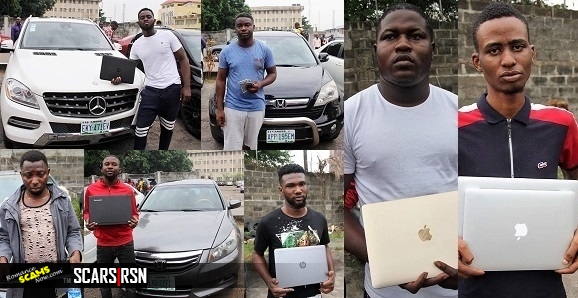 According to him, he feels lucky each time he gets such a task, because the other tasks are unimaginable, and if he refuses to obey, he will suffer grave consequences. For example, Abudu said two months prior to the interview, he was in a restaurant eating when the spiritualist ordered him to sleep with his sister as his monthly task. He refused the order, and as a consequence, he developed skin rashes all over his body for over two months. He took off his jacket, revealing a hidden foam, which was soaked with fluids from the sores on his back. The sores were also emitting a nasty smell, according to the reporter who did the interview. To mask the smell, Abudu uses strong-scented perfumes. His friends, Samson and George (not their real names) also shared how they got involved in sakawa, saying that they had sacrificed two babies that were a day old as part of the initiation ceremony. “I want to stop. I want to give all I have away and just have my peace of mind. It is tough,” George said The three men said they wanted to quit, but it appears impossible, because three of their friends have died after failing to perform tasks laid out by the spiritualist.

Abudu stated that a childhood friend at Swedru in the Central Region introduced him to the practice five years prior to the interview. He said the friend, Kudu (not his real name) had been doing Sakawa for over eight years and was madly rich, with over $5 million dollars in his bank account.

At a time many young people were struggling to make a living, he said, Kudu had a four bedroom mansion with a swimming pool and a wine bar. Kudu also had a mansion in Takoradi and another one in Tema. Abudu said apart from the poor life he was living, the wealth and ostentation displayed by his friend lured him into Sakawa. He initially started with internet fraudFraud In law, fraud is intentional deception to secure unfair or unlawful gain (money or other assets), or to deprive a victim of a legal right. Fraud can violate civil law (e.g., a fraud victim may sue the fraud perpetrator to avoid the fraud or recover monetary compensation) or criminal law (e.g., a fraud perpetrator may be prosecuted and imprisoned by governmental authorities), or it may cause no loss of money, property, or legal right but still be an element of another civil or criminal wrong. The purpose of fraud may be monetary gain or other benefits, for example by obtaining a passport, travel document, or driver's license, or mortgage fraud, where the perpetrator may attempt to qualify for a mortgage by way of false statements. A fraud can also be a hoax, which is a distinct concept that involves deliberate deception without the intention of gain or of materially damaging or depriving a victim. and after months of cultivating clients online, he defrauded a Ukrainian woman of $2000. He said the money realised from the practice was not enough for the “big man” kind of life he wanted, so he went into the proper sakawa that involved rituals and sacrifices. He said before getting involved in sakawa, he was not told about the mandatory sacrifices he had to perform every five weeks.

For his initiation, Abudu slept in a coffin at midnight for three weeks, after which he was given a liquid potion to smear on his body every day for a period of three months. “Finally, I was instructed to sleep with four girls in a day and deliver their pants to the spiritualist,” he said. When he was asked what happened to those girls, Abudu said he did not know because, “I was told not to ask questions.” He said he was also made to perform what he called the “ultimate sacrifice”. However, he refused to discuss what it meant or entailed. He said four months after the rituals and the “ultimate sacrifice”, he became insanely rich, with over $2 million dollars in his bank account. Asked how he got the money, he said his bank called him and told him that some unknown foreigners had deposited a huge sum of money in his account.

Abudu said after over two years of performing the monthly sacrifices, he was tired and frustrated and wanted a way out. “Today you will be ordered to do this; tomorrow you will be asked to do something unimaginable. It’s a hell on earth for me,” he lamented. To compound matters for him, Abudu said his friend who introduced him to Sakawa fell seriously ill after failing to perform a mandatory task he was given. “He has sores all over his body and a big boil in his anus. He is really suffering,” he said. When asked what he would do to free himself from the sakawa scourge, Abudu replied, “I don’t know.”

SCARS, RSN, Romance Scams Now, SCARS|GLOBAL, SCARS, Society of Citizens Against Relationship Scams, Society of Citizens Against Romance Scams, SCARS|ANYSCAM, Project Anyscam, Anyscam, SCARS|GOFCH, GOFCH, SCARS|CHINA, SCARS|CDN, SCARS Cybercriminal Data Network, Cobalt Alert, Scam Victims Support GroupSupport Group In a support group, members provide each other with various types of help, usually nonprofessional and nonmaterial, for a particular shared, usually burdensome, characteristic, such as romance scams. Members with the same issues can come together for sharing coping strategies, to feel more empowered and for a sense of community. The help may take the form of providing and evaluating relevant information, relating personal experiences, listening to and accepting others' experiences, providing sympathetic understanding and establishing social networks. A support group may also work to inform the public or engage in advocacy. They can be supervised or not. SCARS support groups are moderated by the SCARS Team and or volunteers., are all trademarks of Society of Citizens Against Relationship Scams Incorporated.