SCARSSCARS SCARS - Society of Citizens Against Relationship Scams Inc. A government registered crime victims' assistance & crime prevention nonprofit organization based in Miami, Florida, U.S.A. SCARS supports the victims of scams worldwide and through its partners in more than 60 countries around the world. Incorporated in 2015, its team has 30 years of continuous experience educating and supporting scam victims. Visit www.AgainstScams.org to learn more about SCARS.™ SCAMScam A Scam is a confidence trick - a crime -  is an attempt to defraud a person or group after first gaining their trust through deception. Scams or confidence tricks exploit victims using their credulity, naïveté, compassion, vanity, irresponsibility, or greed and exploiting that. Researchers have defined confidence tricks as "a distinctive species of fraudulent conduct ... intending to further voluntary exchanges that are not mutually beneficial", as they "benefit con operators ('con men' - criminals) at the expense of their victims (the 'marks')". A scam is a crime even if no money was lost. NEWS: 37 Nigerian Scammers Arrested

37 Nigerian Internet Scammers Who Were Living Like Royals Arrested 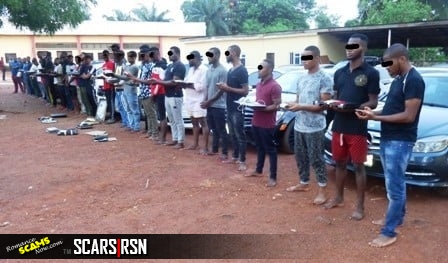 37 Nigerian internet scammers who were living like royals arrested

According To Local Nigerian News:

The arrest followed a raid on some targeted residences in Okwu Urata, Aladinma and Egbu areas.

The Commission’s action followed intelligence report which pointed out that the suspects were living lavish lifestyles without any known means of livelihood, alleging further that they specialize in defrauding unsuspecting victims, through the internet.

In the course of executing the search warrants, items which included laptop computers, 25 exotic cars, which include several brands of Mercedez-Benz, Lexus, Toyota and expensivemobile phones, were recovered.

Speaking on the development, theZonal Head, Usman Imam, who said the exercise was in line with the Commission’s mandate decried the high rate of cybercrimeCybercrime Cybercrime is a crime related to technology, computers, and the Internet. Typical cybercrime are performed by a computer against a computer, or by a hacker using software to attack computers or networks. in the zone which he blamed on the erosion and breakdown  of  country’s values.

“It is true that no society has been