SCARS™ Advocacy: What The FTC Facebook Settlement Means For Consumers

SCARS™ Advocacy: What The FTC Facebook Settlement Means For Consumers

SCARSSCARS SCARS - Society of Citizens Against Relationship Scams Inc. A government registered crime victims' assistance & crime prevention nonprofit organization based in Miami, Florida, U.S.A. SCARS supports the victims of scams worldwide and through its partners in more than 60 countries around the world. Incorporated in 2015, its team has 30 years of continuous experience educating and supporting scam victims. Visit www.AgainstScams.org to learn more about SCARS.™ Advocacy: What The FTCFTC The Federal Trade Commission (FTC) is an independent agency of the United States government whose principal mission is the enforcement of civil (non-criminal) U.S. antitrust law and the promotion of consumer protection. The FTC can also act as a clearinghouse for criminal reports sent to other agencies for investigation and prosecution. To learn more visit www.FTC.gov or to report fraud visit ReportFraud.FTC.gov Facebook Settlement Means For Consumers

The Next Time Users Visit Facebook, Things Might Not Look Different, But Big Changes Are Brewing Behind The Scenes

First, some background. Facebook is a social networking site, but it makes money by serving up targeted ads based on users’ personal information. Many consumers are hesitant about sharing certain data, so Facebook calms that concern by promising that people can control the privacy of their information through the platform’s privacy settings.

The FTC sued Facebook in 2012 for making misleading promises about the extent to which consumers could keep their personal information private. For example, Facebook told users they could select settings to make information available just to “friends.” But despite that promise, Facebook allowed appsApps Applications or Apps An application (software), commonly referred to as an ‘app’ is a program on a computer, tablet, mobile phone or device. Apps are designed for specific tasks, including checking the weather, accessing the internet, looking at photos, playing media, mobile banking, etc. Many apps can access the internet if needed and can be downloaded (used) either for a price or for free. Apps are a major point of vulnerability on all devices. Some are designed to be malicious, such as logging keystrokes or activity, and others can even transport malware. Always be careful about any app you are thinking about installing. used by those friends to access consumers’ information, a decision that put money in Facebook’s pocket. The 2012 FTC order put penalties in place if Facebook made misleading statements in the future about consumers’ control over the privacy of their personal information.

According to the FTC, that’s just what happened. Facebook violated the order by again giving companies access to information that consumers said they didn’t want to share. The FTC also alleges Facebook made other misleading statements about how it used facial recognition, consumers’ cell phone numbers, and other personal data. 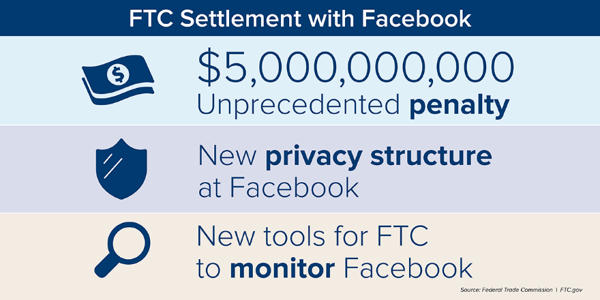 Here Are Three Things To Know About The FTC’s History-Making Settlement With Facebook:

While This Will Not Have Much Impact On Scammers Initially …

This does mean that the federal government will inside of Facebook for many years. This will give them more insight and more control over Facebook for years to come, and complaints and advocacy, such as from SCARS and others, will be able to impact Facebook more directly and rapidly than ever before!