On March 27th 2019, an event was held by the Saudi Arabian Ministry of Culture in Riyadh, Kingdom of Saudi Arabi. This was to kick off their 2030 National Transformation Plan » for modernization. This was attended by our Chairman and one of our Board Members. 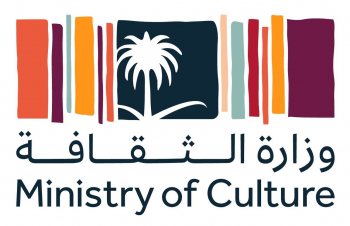 The first event was met with major fanfare (here is one of their press releases » the event that Dr. McGuinness attended.) Here is more press about the event (click here »)

We do thank the Royal Government for their invitation and the all-expenses-paid visit to their kingdom, but that is where we have to stop the propaganda and get down to the reality of the situation on the ground for scam victims in Saudia Arabia – at the risk of alienating ourselves from future conversations with their government.

The objective for the conversation was to be about Scams that originate in Saudi Arabia and how they care for the victims of scams. Our goal was to coordinate with them on identified scammers, and how to better support victims there. 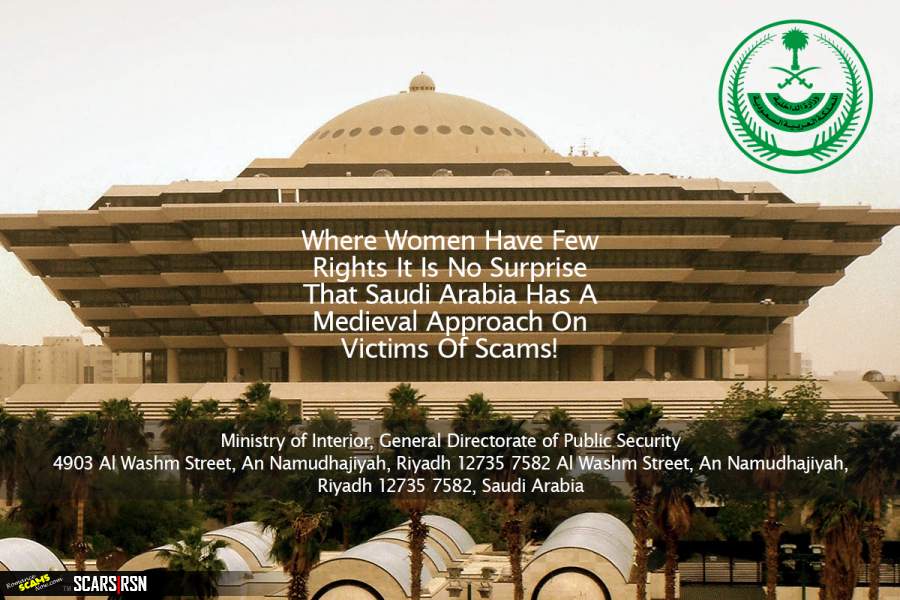 To Say We Were Shocked Is An Understatement!

Our overtures were not well received. In fact, it was viewed as an attempt to interfere in the internal affairs of their country and with some hostility. Something we have never seen in our meetings with other country’s police forces.

We must be cautious in the representations we make and how we report on these matters since the power of the Saudi Kingdom is well known, both financially and diplomatically. As a nonprofit, we always must be concerned about our donors and our ability to work with governments around the world. Plus our team frequently passes through this region on their way to China, so care must be exercised in what we report.

However, there were certain revelations that emerged that must be shared.

Is It Really Any Surprise?

Is it really any surprise that in the land where Islamic law allows for the stoning of people that we should expect a modern approach to the recognition and care of victims?

In our first exposure to their current culture during the 2030 Cultural Event, all was modern, gracious and civil. But the following day we were given the opportunity to visit their national police directorate and meet with officials and officers that actually deal with online crimes and their victims. Our reception was professional and polite but frigid.

The Saudi View Of Scammers

In General, The View Of The Saudi Police On Scammers Varies Depending On The Type Of Scam And The Gender Of The Victim

For example, business fraud is treated very seriously with harsh prison sentences, even allowing the death penalty in very severe cases. Thus we hear of very little in the way of true business scams originating from the Kingdom. The same views hold for malware distribution, such as ransomware and other forms of online extortion. There is an active hacker community, but only those that work for the government are tolerated.

The local police enforce the law vigorously in the cases of business scams. They even treat “fake news” as another form of business scam and it can be punished severely.

The result is generally a serious intent to enforce international norms when it applies to business fraud.

The Saudi view on Soft Scams – those affecting individuals was radically different and intolerant.

In Essence, In The Case Of These: It Is All The Victim’S Fault!

Victim blaming – it is based on the victim’s greed or lust or other immoral behavior – in their view – is at the root of all non-business socially engineered scams.

THEIR VIEW IS THAT THE VICTIMS GOT WHAT THEY DESERVED!

They do not even view these scams as being a crime since their formal view is that the victim made a gift of their money to the scammer. Fraud without a financial loss is also not viewed as a crime at all, just foolish behavior (as long as it does not break other laws or moral behavior.)

Now we get into the truly MEDIEVAL side of their view and policies.

And It Is Highly Skewed Based Upon The Gender Of The Victim:

A Male Victim of a romance scam can be excused for being “stupid” (as they say.) They are simply following lust and other immoral behavior and their punishment is typically the function of their religious law – meaning a penance of some kind.

Women, on the other hand, can face true horror for being the victim of a romance scam. Now we understand why so few victims ever come forward from this region of the world. Depending on the circumstances, a woman romance scam victim can face significant physical abuse up to an including death, all sanctioned under the law.

If A Woman Is Single (unmarried) and is involved in a romance scam it brings shame onto the family and the victim’s father has the right to physically punish the victim. This can include “caning,” whipping, or beatings by the father or her brothers, or other male family members. If it involved sending money to a scammer – since the money is not considered hers but belonging to the family – she can be remanded to the police for theft. We were told about these incidents but not shown any statistics of how many victims there were.

If A Woman Is Married and engages in a romance scam then the situation is far worse. Indeed, being involved with a romance scam while married is technically a form of infidelity but in their culture infidelity is punishable in the most severe ways. This includes the death sentence.

Here Are Examples Of Crimes In Saudia Arabia That Carry The Death Sentence!

Punishment By Death Is A Common Occurrence In Saudi Arabia

In fact, Deera Square, in central Riyadh. is known locally as “Chop-chop square,” it is the location of public beheadings. Saudi law » theoretically allows the death penalty for many crimes. 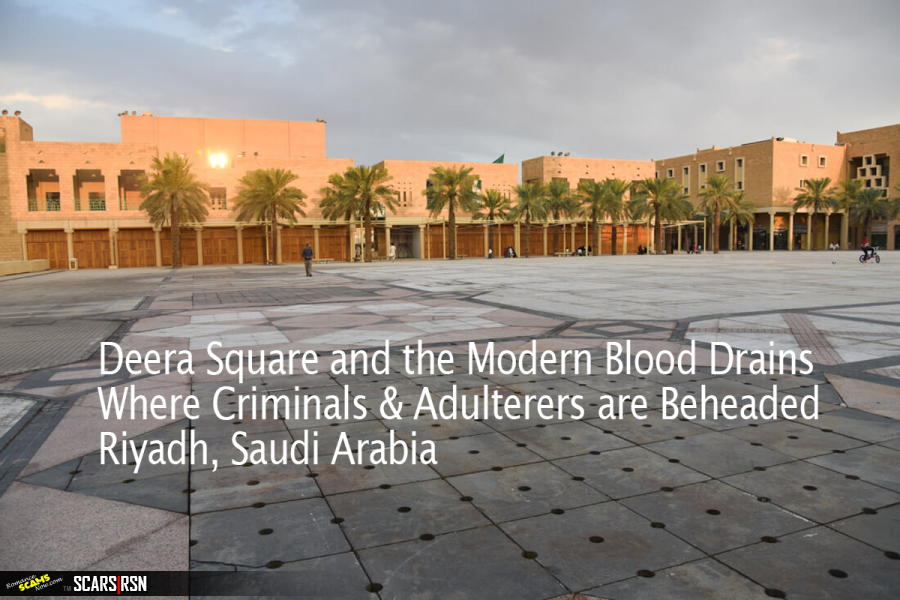 First, let it be said that the government seems to feel no sympathy for the victims of romance scams, male or female. However, a married female victim will truly run the risk of not only financial loss but total separation from her family forever (in the case of a more enlightened husband) or beatings and death if she is married to a more traditional man.

The police would not provide any information on the numbers of these killings or beatings except to say it happens and it is not their business to interfere in the business of married families. Unless the woman is turned over to the police as an adulterer, and in those cases, the punishment is 100 lashes of a whip.

In the meeting we had with them, it was quickly obvious that this is not a society or culture that can be motivated to change rapidly, unlike the Government of Ghana for example, who is now in discussions with SCARS over changes and reductions in scamming.

Saudi Arabia is clearly looking at these crimes differently than the entire rest of the world which recognizes them for what they are (except now for the newly fundamentalist kingdom of Brunei in South East Asia and a few other countries).

Clearly, Saudia Arabia (and others in the region) operate from the assumption that the victim of a scam is at fault and in many cases is committing a severe crime themselves. The killing of women is not only allowed but a recognized right under their culture – such as Honor Killings and in cases of Adultery. It can be done in private or in public by beheadings, stonings, or other means.

We are very sympathetic to the plight of scam victims there but we also recognized that activism comes with dangers, and it was made clear to us that our opinions were not invited or we risked being subjected to personal risk. This was an amazing contrast after experiencing the overtly modern gala the night before, then entering the ultra-modern Ministry of the Interior building only to find mindsets from ancient times.

An even stranger twist on this is that we were told that some women engage in witchcraft against men online and that that too is punishable by death. The police firmly believe in witches!

Sadly there is no solution to the plight of romance scam victims where Islamic law prevails.

But it is important to recognize the problem and work as much as possible to address it from the outside. We must also always be on guard that this cultural approach to victims does not expand into our own countries – from Great Briton to the U.S., Europe, or Asia. With the application of Islamic law in Brunei, Mindanao, Bangladesh, Pakistan and elsewhere in the Middle East – victims face extraordinary risk if they come forward to local police.

We are quite proud of our SCARS Member Groups in Indonesia and Malaysia and the success they have had working with the police there to change the attitudes there!

If You Are A Victim Always Consider Your Own Safety First Before Reporting The Scam!

Of course, victims in the Western or Asian world are acknowledged for what they are – the victim of a criminal – but this is not the case everywhere.

This was written only after our plane lifted off from the King Khalid International Airport in Riyadh tonight on our way back to the U.S. since we were advised that WiFi was controlled and monitored.