We want to protect and respect both expression and personal safety on Facebook. Our goal is to create a safe and welcoming community for the more than 2 billion people who use Facebook around the world, across cultures and perspectives.

To help us with that goal, our Community Standards define what is and isn’t allowed on Facebook. We don’t allow anything that goes against these standards, and we invest in technology, processes and people to help us act quickly so standards violations affect as few people as possible.

People may intentionally or unintentionally act in ways that go against our standards. We respond differently depending on the severity, and we may take further action against people who repeatedly violate standards. In some cases, we also contact law enforcement to prevent real-world harm.

Facebook regularly get requests for information about how effective they are at preventing, identifying and removing violations and how their technology helps these processes.

They claim that they want to communicate details about this work and how it affects their community. They have shared preliminary metrics in this report to help people understand how they are doing at enforcing our Community Standards. Of course, this is purely a defensive move as Facebook is under siege for so many abuses and lapses in their management of their platform.

In this report, being the first they have published about their ongoing Community Standards enforcement efforts, is just a first step – so they say.

They say and is probably correct that they are still refining their internal methodologies for measuring these efforts and expect these numbers to become more precise over time. This report covers the period October 2017 through March 2018 and includes metrics on enforcement of:

Facebook claims that they continually improve how they internally categorize the actions they take to enforce their community standards. This involves consistently categorizing the violation types for actions they take against content and accounts. Being “better at categorizing these actions will help them refine their metrics” they state. As they do this, we hope that they will continuously expand reporting on enforcement of additional standards in future versions of their reports.

With this report, they say they aim to answer 4 questions for enforcement of each Community Standard.

We consider prevalence to be a critical metric because it helps us measure how many violations impact people on Facebook. We measure the estimated percentage of views that were of violating content. (A view happens any time a piece of content appears on a user’s screen.) For fake accounts, we estimate the percentage of monthly active Facebook accounts that were fake. These metrics are estimated using samples of content views and accounts from across Facebook.

We measure the number of pieces of content (such as posts, photos, videos or comments) or accounts we take action on for going against standards. “Taking action” could include removing a piece of content from Facebook, covering photos or videos that may be disturbing to some audiences with a warning, or disabling accounts.

This metric shows the percentage of all content or accounts acted on that we found and flagged before users reported them. We use detection technology and people on our trained teams (who focus on finding harmful content such as terrorist propaganda or fraudulent spam) to help find potentially violating content and accounts and flag them for review. Then, we review them to determine if they violate standards and take action if they do. The remaining percentage reflects content and accounts we take action on because users report them to us first.

We try to act as quickly as possible against violations to minimize their impact on users. One way we’re considering answering this question is by measuring views before we can take action. We’re finalizing our methodologies for how we measure this across different violation types. We’ll make these metrics available in future versions of this report.

We are going to focus on Fake accounts and disregard the other categories in this article.

According to Facebook: “Individual people sometimes create fake accounts on Facebook to misrepresent who they are.” Really? However, in most cases, bad actors try to create fake accounts in large volumes automatically using scripts or bots, with the intent of spreading spam or conducting illicitillicit Illicit means something that is not legally permitted or authorized under the law; unlicensed; unlawful. It can also mean disapproved of or not permitted for moral or ethical reasons. activities such as scamsScams A Scam is a confidence trick - a crime -  is an attempt to defraud a person or group after first gaining their trust through deception. Scams or confidence tricks exploit victims using their credulity, naïveté, compassion, vanity, irresponsibility, or greed and exploiting that. Researchers have defined confidence tricks as "a distinctive species of fraudulent conduct ... intending to further voluntary exchanges that are not mutually beneficial", as they "benefit con operators ('con men' - criminals) at the expense of their victims (the 'marks')". A scam is a crime even if no money was lost..

Because they’re often the starting point for other types of standards violations, they claim they are vigilant about blockingBlocking Blocking is a technical action usually on social media or messaging platforms that restricts or bans another profile from seeing or communicating with your profile. To block someone on social media, you can usually go to their profile and select it from a list of options - often labeled or identified with three dots ••• and removing fake accounts.

They say “Getting better at eliminating fake accounts makes us more effective at preventing other kinds of violations. Our detection technology helps us blockBlock Blocking is a technical action usually on social media or messaging platforms that restricts or bans another profile from seeing or communicating with your profile. To block someone on social media, you can usually go to their profile and select it from a list of options - often labeled or identified with three dots ••• millions of attempts to create fake accounts every day and detect millions more often within minutes after creation. We don’t include blocked attempts in the metrics we report here.” Great, thank’s Facebook!

?We estimate that fake accounts represented approximately 3% to 4% of monthly active users (MAU) on Facebook during Q1 2018 and Q4 2017. We share this number in the Facebook quarterly financial results. This estimate may vary each quarter based on spikes or dips in automated fake account creation.”

This is inconsistent with Facebook’s own quarterly reports where it is closer to 8%. SCARSSCARS SCARS - Society of Citizens Against Relationship Scams Inc. A government registered crime victims' assistance & crime prevention nonprofit organization based in Miami, Florida, U.S.A. SCARS supports the victims of scams worldwide and through its partners in more than 60 countries around the world. Incorporated in 2015, its team has 30 years of continuous experience educating and supporting scam victims. Visit www.AgainstScams.org to learn more about SCARS. Analysis is that it is closer to 20% = 20% would be 400 Million Fake Profiles.

How Many Fake Accounts Does Facebook Say They Take Action On? 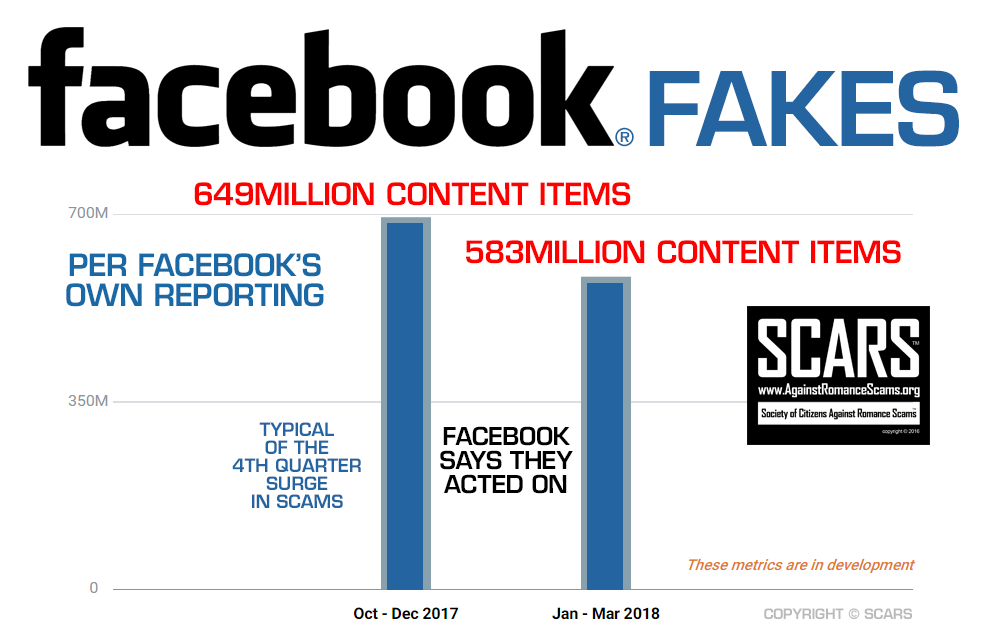 Facebook claims that they measure how many Facebook accounts they took action on because they determined they were fake.  Facebook says this number reflects fake accounts that get created and then are disabled. It doesn’t include attempts to create fake accounts that we blocked.

What The Numbers Mean

According to Facebook: “These numbers are largely affected by external factors, such as cyberattacks that increase fake accounts on Facebook. Bad actors try to create fake accounts in large volumes automatically using scripts or bots, with the intent of spreading spam or conducting illicit activities such as scams. The numbers can also be affected by internal factors, including the effectiveness of our detection technology.”

In Q1 2018, they say the disabled 583 million fake accounts, down from 694 million in Q4 2017. We suspect that the number of fake accounts did not go down, but rather the chaos with their moderators is resulting in lower effectiveness.

Notice that Facebook says that there are between 3% to 4% fake accounts, yet by the numbers below it peaks at almost 35% – what are we to believe?

Facebook says that these metrics can vary widely (what does that mean?) for fake accounts acted on, driven by new cyberattacks and the variability of our detection technology’s ability to find and flag them. The decrease in fake accounts disabled between Q4 and Q1 is largely due to this variation. What the really means is they really are guessing how effective they are and how many fake accounts there are.

How Many Fake Accounts Does Facebook Claim They Find Before Users Report Them? 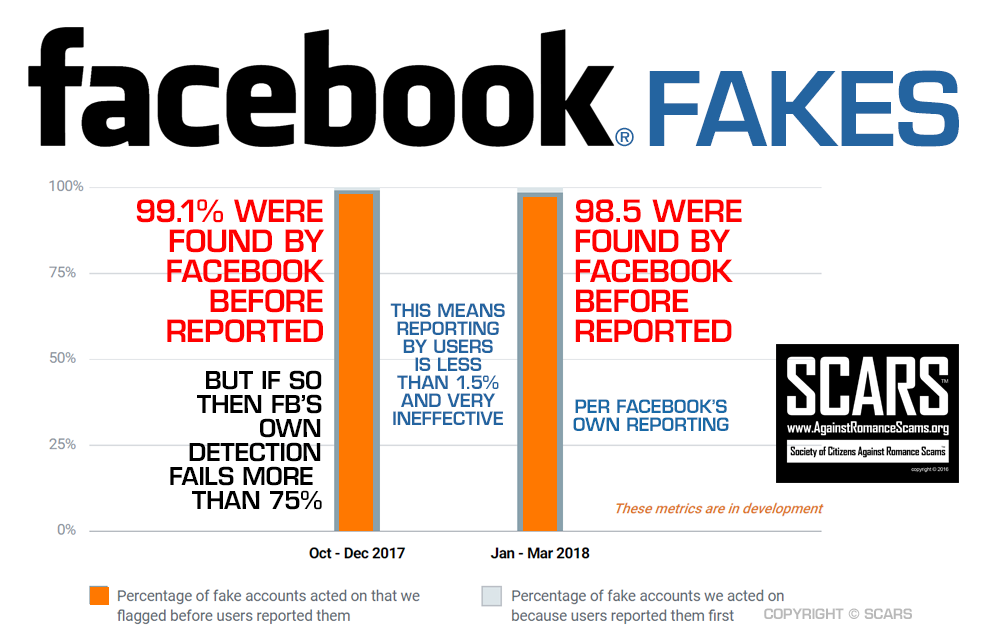 Facebook Fakes It Detected Automatically InfographicInfographic Infographics (a shortened word of "information" and "graphics") are graphic visual representations of information, data, or knowledge intended to present information quickly and clearly. They can improve your understanding of a topic by utilizing graphics. Infographics have evolved in recent years to be more useful for mass communications and thus are designed with fewer assumptions about the readers' knowledge base than other types of visualizations.

What They Say They Measure

Notice that there is no reporting of “false positives” – in other words, real people it thought were fakes and acted upon.

Also, it does not reflect the overall number of fakes that were reported but disregarded which we estimate to be over 80%.

Facebook says that “these numbers change based on how our detection technology help us find potential fake accounts, review them and remove them.” But the sad truth is that they do not know what they don’t know – there could be many times more fakes (and probably are) that their detection does not see.

In Q1 2018, they say they found and flagged 98.5% of the accounts they subsequently took action on before users reported them. They acted on the other 1.5% because users reported them first. This number decreased from 99.1% in Q4 2017. Maybe the number decreased because they are not listening to the reports by users as much – in other words, automatically disregarding most of them since their moderators only have 10 seconds to decide if a profile is fake!

Once again, Facebook claims that their metrics can vary widely for fake accounts acted on, as explained above. The decrease in the percentage of fake accounts found and flagged between Q4 and Q1 is largely due to this variation. Against, they have no clue!

What Does This Tell Us?

It Tells Us That:

For Facebook To Be Truly Transparent It Needs To Include Additional Metrics:

In short, this is a systemic failure on Facebook’s part. No international quality standard would accept such a process. 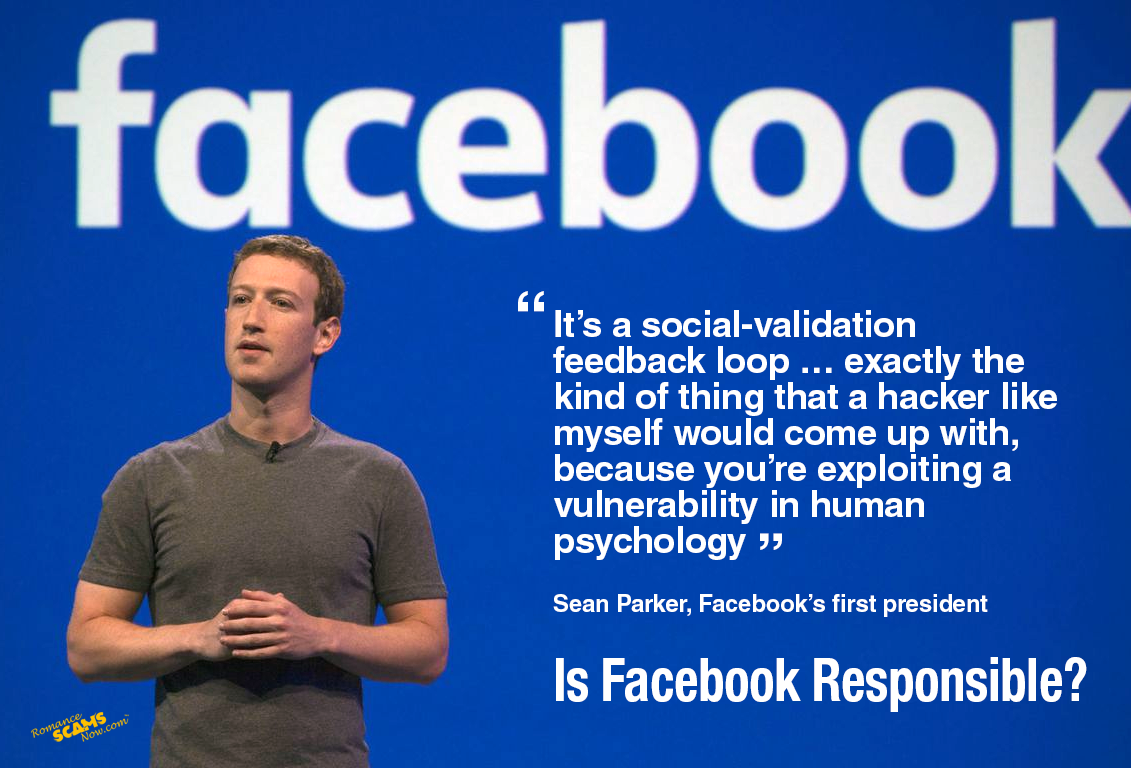 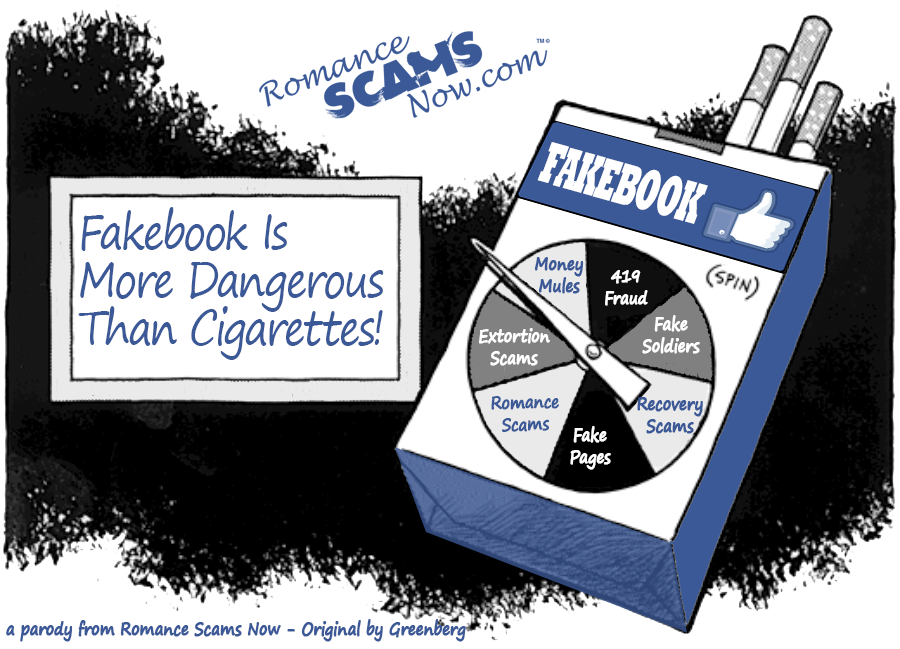