SCARSSCARS SCARS - Society of Citizens Against Relationship Scams Inc. A government registered crime victims' assistance & crime prevention nonprofit organization based in Miami, Florida, U.S.A. SCARS supports the victims of scams worldwide and through its partners in more than 60 countries around the world. Incorporated in 2015, its team has 30 years of continuous experience educating and supporting scam victims. Visit www.AgainstScams.org to learn more about SCARS.™ Guide: Natural Disaster Frauds & ScamsScams A Scam is a confidence trick - a crime -  is an attempt to defraud a person or group after first gaining their trust through deception. Scams or confidence tricks exploit victims using their credulity, naïveté, compassion, vanity, irresponsibility, or greed and exploiting that. Researchers have defined confidence tricks as "a distinctive species of fraudulent conduct ... intending to further voluntary exchanges that are not mutually beneficial", as they "benefit con operators ('con men' - criminals) at the expense of their victims (the 'marks')". A scam is a crime even if no money was lost.

As Another Major Hurricane Approaches The Department Of Justice Reminds The Public To Be Aware Of FraudFraud In law, fraud is intentional deception to secure unfair or unlawful gain (money or other assets), or to deprive a victim of a legal right. Fraud can violate civil law (e.g., a fraud victim may sue the fraud perpetrator to avoid the fraud or recover monetary compensation) or criminal law (e.g., a fraud perpetrator may be prosecuted and imprisoned by governmental authorities), or it may cause no loss of money, property, or legal right but still be an element of another civil or criminal wrong. The purpose of fraud may be monetary gain or other benefits, for example by obtaining a passport, travel document, or driver's license, or mortgage fraud, where the perpetrator may attempt to qualify for a mortgage by way of false statements. A fraud can also be a hoax, which is a distinct concept that involves deliberate deception without the intention of gain or of materially damaging or depriving a victim. And Report It To The National Center For Disaster Fraud

The Department of Justice established the National Center for Disaster Fraud (NCDF) in the wake of Hurricane Katrina, when billions of dollars in federal disaster relief poured into the Gulf Coast region, which opened opportunities for criminals to exploit people during vulnerable times.  The NCDF, a national coordinating agency within the Department’s CriminalCriminal A criminal is any person who through a decision or act engages in a crime. This can be complicated, as many people break laws unknowingly, however, in our context, it is a person who makes a decision to engage in unlawful acts or to place themselves with others who do this. A criminal always has the ability to decide not to break the law, or if they initially engage in crime to stop doing it, but instead continues. Division, operates a call center at Louisiana State University in Baton Rouge and serves as a centralized clearinghouse for disaster fraud complaints and information relating to both natural and man-made disasters.  The NCDF seeks to improve and further the detection, prevention, investigation, and prosecution of fraud related to natural and man-made disasters, and to advocate for victims of such fraud.  More than 20 federal, state, and local agencies participate in the NCDF, which allows them to forward on complaints to the appropriate agency for investigation.

“Following Hurricane Dorian’s landfall and as recovery efforts continue, it is important for people to be on the lookout for fraudsters who seek to profit from natural disasters through identity theftIdentity Theft Identity theft is when someone uses another person's personal identifying information, without their permission, to commit fraud or other crimes. In both the U.K. and the United States it is the theft of personally identifiable information. Identity theft deliberately uses someone else's identity as a method to gain financial advantages or obtain credit and other benefits, and perhaps to cause other person's loss. The person whose identity has been stolen may suffer adverse consequences, especially if they are falsely held responsible for the perpetrator's actions. Personally identifiable information generally includes a person's name, date of birth, social security number, driver's license number, bank account or credit card numbers, PINs, electronic signatures, fingerprints, passwords, or any other information that can be used to access a person's financial resources. schemes, impersonationImpersonation An impersonator is someone who imitates or copies the behavior or actions of another. There are many reasons for impersonating someone, such as: part of a criminal act such as identity theft, online impersonation scam, or other fraud. This is usually where the criminal is trying to assume the identity of another, in order to commit fraud, such as accessing confidential information or to gain property not belonging to them. Also known as social engineering and impostors. of government officials and solicitations for fake charities,” said Deputy Attorney General Rod Rosenstein.  “The Department of Justice is committed to detecting this type of fraud, and we will aggressively prosecute the offenders. Through our National Center for Disaster Fraud, and in conjunction with our law enforcement partners, we are working to keep Americans from becoming victims of these schemes.”

After every Hurricane’s landfall, many people are left without food, water, or shelter, and are experiencing devastating damage to life and property.  Unfortunately, there are criminals ready to take advantage of victims before, during, and especially after a natural disaster.  They are looking to strike those at their most vulnerable time.

While compassion, assistance, and solidarity are generally prevalent in the aftermath of natural disasters, unscrupulous individuals and organizations also use these tragic events to take advantage of those in need. 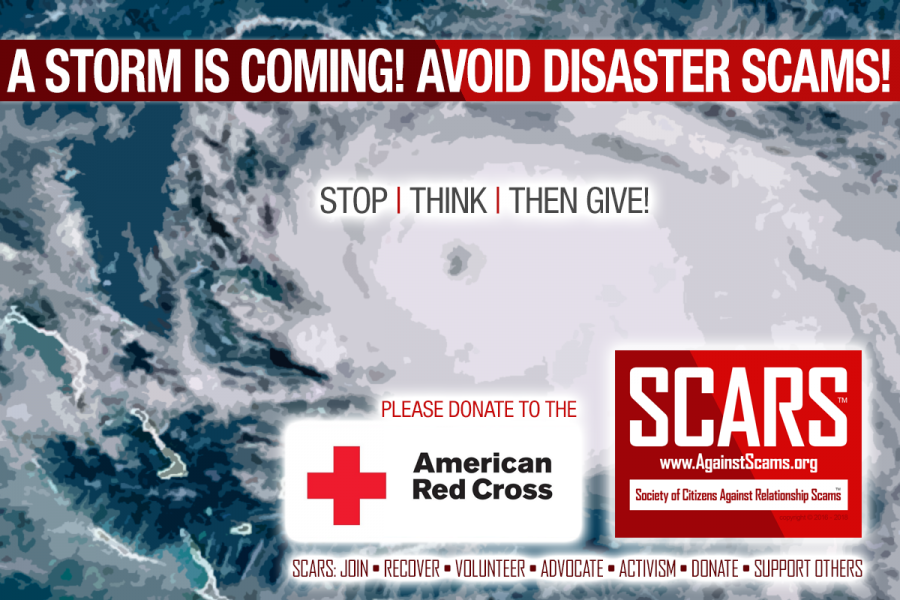 Examples Of Illegal Activity Being Reported To The NCDF And Law Enforcement Include:

“The NCDF has an excellent staff of investigators, analysts, call center operators, and managers who are well prepared to handle the anticipated volume of complaints after the recent hurricanes and help ensure that each report of fraud reaches the appropriate investigative agency,” said U.S. Attorney Brandon J. Fremin for the Middle District of Louisiana, who is also the NCDF’s Executive Director.  “Raising public awareness is a great way for the NCDF to reach thousands of people who may one day be subjected to fraudulent schemes.”

Members of the public are reminded to apply a critical eye and exercise due diligence before trusting anyone purporting to be working on behalf of disaster victims.  They should also exercise the same care before giving contributions to anyone soliciting donations on behalf of disaster victims as well as being extremely cautious before providing personal identifying or financial information to anyone, especially those who may contact you after a natural disaster.  Solicitations can originate from e-mails, websites, door-to-door collections, mailings and telephone calls, and similar methods.

Members of the public who suspect fraud, waste, abuse, or allegations of mismanagement involving disaster relief operations, or believe they have been the victim of fraud from a person or organization soliciting relief funds on behalf of disaster victims, should contact the National Disaster Fraud Hotline toll-free at (866) 720-5721.   The telephone line is staffed by live operators 24 hours a day, seven days a week. You can also fax information to the Center at (225) 334-4707, or email it to disaster@leo.gov.

Learn more about the NCDF at www.justice.gov/disaster-fraud and watch a public service announcement here.

Tips for the public on how to avoid being victimized of fraud are here – click here ».

TAGS: SCARS, Important Article, Information About Scams, Anti-ScamScam A Scam is a confidence trick - a crime -  is an attempt to defraud a person or group after first gaining their trust through deception. Scams or confidence tricks exploit victims using their credulity, naïveté, compassion, vanity, irresponsibility, or greed and exploiting that. Researchers have defined confidence tricks as "a distinctive species of fraudulent conduct ... intending to further voluntary exchanges that are not mutually beneficial", as they "benefit con operators ('con men' - criminals) at the expense of their victims (the 'marks')". A scam is a crime even if no money was lost., SCARS Guide, Natural Disaster Frauds & Scams, Major Hurricane, U.S. Department Of Justice, Be Aware Of Fraud, Report It, The National Center For Disaster Fraud, NCDF

The Supreme Court Battle Is Coming Against Big Tech

SCARS is participating in an important University Study about Military Stolen Valor Scams. We need your help to make this research a success. It is totally confidential – you do not even have to use your name!