RSN™ Guide: How To Spot Fake ScammerScammer A Scammer or Fraudster is someone that engages in deception to obtain money or achieve another objective. They are criminals that attempt to deceive a victim into sending more or performing some other activity that benefits the scammer. Passports

Scammers Use Fake Documents All The Time

Scammers create fake documents to support their fake identities! Ironically with just a little common sense they are easy to spot!

However, spotting fake documents is not hard – all you need to do is look with a skeptical eye.

Here are the key things to look for:

Text On The Passport

InfographicInfographic Infographics (a shortened word of "information" and "graphics") are graphic visual representations of information, data, or knowledge intended to present information quickly and clearly. They can improve your understanding of a topic by utilizing graphics. Infographics have evolved in recent years to be more useful for mass communications and thus are designed with fewer assumptions about the readers' knowledge base than other types of visualizations.: Spotting A Fake Passport

Look at the following as a guide: 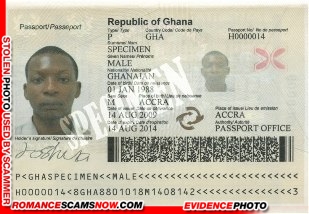