What Is It About These Scammers?

Is this a cultural problem in West Africa? Yes & No!

This relates to the Video About: The Nigerian Captured In Thailand

Our staff was shocked to see this video. We have seen others, and it is always the same. This is more than just crime, this is their way of thinking. This is a fundamental morality. These people go to church, believe in god

[so they say], yet there is no remorse, no compassion, no understanding that what they did is wrong. This is sociopathic.  This is Malignant Narcissism!

Here is another video: http://youtu.be/6Kr4tXgMPTY

What strikes us in watching this one and other videos when these scum are captured is how easily they bend with the wind. One minute they have done nothing wrong and the next they just confess like the police will just accept it and let them go. Every culture has criminals, in the U.S. we have drug dealers who have far more integrity than the West African scammers.

We did a post a while back on a sociologist that studied how Ghana youth become Scammers [This-makes-me-sick] – but we believe she got it massively wrong. These are not just poor kids turning to crime, this is fundamental in their morality, belief systems, and are simply pathological liars. This is the same mentality that let them sell their fellow Africans to Europeans as slaves. We fail to remember that the slave trade was NOT started by Europeans, it was started by the Africans themselves [not all to be sure, but by people just like these]. This is also the mentality that let the Nazis kill millions without a second thought.

The reason that these scammers are SO GOOD, is they simply care nothing about anyone but themselves. They are perfect examples of Malignant Narcissism.

In trying to counter this type of scamming that is not unique to the West Africans, but is certainly concentrated, it is important to understand their psychology.  A thorough understanding can actually allow their victims to turn the tables on them. 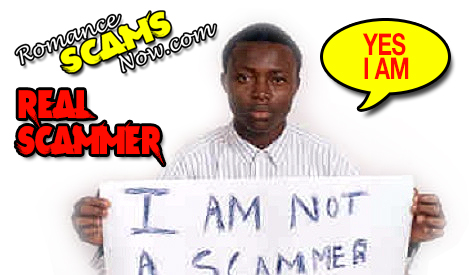 The Main Traits Of The Malignant Narcissist Scammer:

THEY ARE PATHOLOGICAL LIARS:

They are skillfully deceptive and very convincing. Avoid accountability by diverting topics, dodging questions, and making up new lies, bluffs or threats when questioned. Their memory is self-serving as they deny past statements. Constant chaos and diverting from reality is their chosen environment.

They never accept responsibility. Blames others for their failures and circumstances. A master at projection.  You need to learn about projection – both your own and theirs.

They are a wife-Beater, Murderer, Serial Killer, Stalker, Terrorist. Has a ‘chip-on-his-shoulder’ attitude. They lash out and destroy or use others (particularly women and children, though men too from a position of stealth – such as fake personas) as scapegoats for their aggression or revenge. They have poor impulse control. Fearless and guiltless, they show bad judgment. They anticipate betrayal, humiliation or punishment, imagines rejection and will reject first to ‘get it over with’. They will harass and push to make you pay attention to them and get a reaction. They will try to make you look out of control. Can become dangerous and unpredictable. Has no remorse or regard for the rights of others.  This is why it is so dangerous to ever meet one in person!

THEY ARE CONTROLLERS & MANIPULATORS:

They know how to pit people against each other. Keeps their allies and targets separated. Is verbally skillful at twisting words and actions. Is charismatic and usually gets their way. Often undermines your support network and discourages you from seeking your family and friends for advice. Money is their objective. Other people’s money [meaning YOUR money] is the goal. They are ruthless, demanding and cruel. This control-freak bully wants you isolated and emotionally dependent on them. They often appear pitiful, confused and in need of help. You rush in to help with your finances, assets, and talents. You can even be used as their proxy interacting with others on their behalf as he sets you up to take the fall or enjoys the performance they are directing.

They are cunning and know who to select and who to avoid. They will come on strong, sweep you off of your feet. They seem to have the same values, interests, goals, philosophies, tastes, habits. They admire your intellect, ambition, honesty and sincerity. They want to love and marry you quickly. They fake integrity, appear helpful, comforting, generous in their idealization phase. Eventually Jekyll turns into Hyde. Their discarded victims suffer emotional and financial devastation. They will very much enjoy the double-dipping attention they get by the scam. You end the relationship and salvage what you can, or you are discarded quickly as they attach to a “new perfect soul mate victim”. They are an opportunistic parasite. Our “Knight in Shining Armor” or “Damsel in Distress”  has become your nightmare. Your healing is lengthy.

Afterwards: Seek therapy. Learn more about this disorder. Know the red flags of their behaviour, and “If they seems too good to be true…” Hide the hurt you feel. Never let him see it. Be watchful for the this internet predator.

They appear socially withdrawn, often dirty, unkempt. Odd thinking is observed. Used as a disguise to appear pitiful to obtain whatever they can.

That is the fully-unmasked malignant narcissist. Their objective is watching you dangle as they inflict emotional and financial cruelty – of course money is what they want, but this is their pleasure. Their enjoyment is all too obvious, and they’ll be back for more. Their pleasure is in getting away with taking other people’s money, assets, and emotion. Their primary target: women, children, the elderly, but anyone is vulnerable.  Men are also targeted and in their case, it is a male dominance game – getting the upper hand on other males.

Accept the Jekyll/Hyde reality. Make a “No Contact’ rule – meaning NEVER have contact with them again – block their email address. Avoid them altogether – they will try to get you again and again – sometimes under different identities. End any avenue of vulnerability. Don’t allow thoughts of their past ‘good guy/girl’ image to lessen the reality of their disorder and the damage they have done to you emotionally.

They fly off the handle for little or no provocation. Has a severely disproportionate overreaction. Childish tantrums. Their rage can be intimidating and unsettling – this is also part of their game to unbalance you. They want control, attention and compliance. In your hurt and confusion you struggle to make things right. Any reaction is their payoff, as long as it furthers their goal. They seek both good or bad attention. Even our fear, crying, yelling, screaming, name calling, hatred are their objectives if they can’t get your money. If they can get attention by cruelty they will do so.

They are very charismatic. They are able to manipulate others to obtain control, compliance, and money, attention. Strangely they are often found involved in religion. They masterfully target the naive, vulnerable, uneducated or mentally weak. Learn about brainwashing techniques. Listen to your gut instinct. Avoid them.

They never learn from their past follies and bad judgment. Poor impulse control is a hallmark. So don’t get involved. Use your own good judgement. Say No.

They are suspicious of everything usually for no reason. You will see that they flip back and forth in their paranoia.  Terrified of exposure and may be dangerous if threatened. Suddenly ends relationships if they anticipate exposure or abandonment.  If you see this behavior RUN do not walk to the nearest exit!

They will flaunt their toys, their children, their ex-wife/husband, their credentials and accomplishments. Admiration, attention, even glances from others, your envy or your dependence are their objective. They are never satisfied or patient. You see their arrogance and haughtiness as they demand center stage. They will alter their mask at will to appear pitiful, inept, solicitous, concerned, or haughty and superior. Appears to be the perfect father, husband, friend – except they just need your money.  Ignore their childlike behaviours and move on. Know their payoff is getting attention, deceiving or scamming others.

This is the cruellest blow of all. You learn their lack of empathy. They have deceived you by their cunning ability to mimic human emotions. You are left numbed by the realization. It is incomprehensible and painful. You now remember times you saw/heard/read their cold expressions and when they showed odd reactions. Those closest to them become objectified and expendable.  Face the reality. They can deceive trained professionals.

They proclaim high moral standing. Accuses others of immorality. “Hang ’em high” they say about the murderer on the 6:00 news. This hypocrite lies, cheats, schemes, corrupts, abuses, deceives, controls, manipulates and torments while portraying himself of high morals.  Learn the red flags of this behaviour disorder. Be suspicious of people claiming high morals. Especially those that are excessively religious (or claim to be “God Fearing”).

Many times they accidentally forewarn their targets. Early in the relationship they may slip-up revealing their nature saying “You need to protect yourself from scammers” or “Watch out, you never know what anyone is up to.” You go along with them and misinterpret their words. Later, coping with the devastation left behind, their victims recall these chilling warnings.   Know the red flags and be suspicious of the intentions of others.

They say “I’m sorry for pressuring you, I’ll find another way, I love you, I’ll work it out.” Appears to come clean admitting past errors and asking forgiveness. Claims you are at fault and need to forgiven too. The sincerity of their words appears convincing. You learn their words are verbal hooks. They know your vulnerabilities and what buttons to push. You question your judgement about them. You disregard the old saying “Fool me once…” You hope for a different reality. With a successful retargeting attempt, this scammer will enjoy their second cycle of scamming you even more if you allow them back in your life. Expect this. Self-impose a “No Contact” rule. Focus on the reality of their action. Journal past scamming behavior to remind yourself. Report them to anti-scam groups (such as ours).  Join our support group to talk about this with other victims.  Let the anger go.

REMEMBER Do Not Confront

They love getting under your skin.  Every time a victim blows up on them, they learn new lessons and become a better scammer.

The best revenge is never letting them know that you know.  Leave them wondering.

Report them and move on!

What SCARS Visitors Were Looking For?

SCARS Editorial Team at Society of Citizens Against Relationship Scams Inc.
SCARS™ RomanceScamsNow.com™ is the official victims' education & support publication of the Society of Citizens Against Relationship Scams™ Incorporated [SCARS]™ It is edited and published by the SCARS Team. Contact@AgainstScams.org SCARS is a government registered crime victims' assistance & crime prevention nonprofit organization, based in Miami Florida U.S.A. Its founder has been involved in combating online fraud since 1991. SCARS™ - the Society of Citizens Against Relationship Scams Inc. is dedicated to supporting scam victims worldwide, educating the public to avoid scams, and advocating victim's causes and changing government and law enforcement attitudes toward online fraud for good! This SCARS website and all of our publications (including social media) are maintained by our own staff employees and volunteers to provide you the most up to date information about scams & scammers from around the world. We show you how to avoid them or recover from them. Visit us on social media or the website for more information about scams & scammers, and how to recover from your exoerience.

About SCARS in the Press