SCARSSCARS SCARS - Society of Citizens Against Relationship Scams Inc. A government registered crime victims' assistance & crime prevention nonprofit organization based in Miami, Florida, U.S.A. SCARS supports the victims of scams worldwide and through its partners in more than 60 countries around the world. Incorporated in 2015, its team has 30 years of continuous experience educating and supporting scam victims. Visit www.AgainstScams.org to learn more about SCARS.™ Anti-ScamScam A Scam is a confidence trick - a crime -  is an attempt to defraud a person or group after first gaining their trust through deception. Scams or confidence tricks exploit victims using their credulity, naïveté, compassion, vanity, irresponsibility, or greed and exploiting that. Researchers have defined confidence tricks as "a distinctive species of fraudulent conduct ... intending to further voluntary exchanges that are not mutually beneficial", as they "benefit con operators ('con men' - criminals) at the expense of their victims (the 'marks')". A scam is a crime even if no money was lost. Tips: Dating Website Profiles

Yes, All Dating Websites Have Scammers! Some Are Drowning In Them!

From our own observations, almost all dating websites appear to have a very high percentage of Scammers from Africa and Eastern Europe.  They make up the majority of new profiles on many of the dating websites from what we have seen. Of course, Plenty of Fish is the award winner because it is free. Any dating website that allows any form or posting profiles for free is going to be flooded with scammers.

Because of the fact that the scammers use multiple accounts, they are able to take advantage of legitimizing techniques because they have “others” they can refer – so they gain quick advantages on many of these sites.

The scammers engage in the basic behaviors of reviewing photos, and wanting to meet, hoping you will also connect.  Plus they continue to figure out ways to get you messaging outside the dating site.

Here Are A Typical Page Of Profiles From A Dating Website BADOO.com 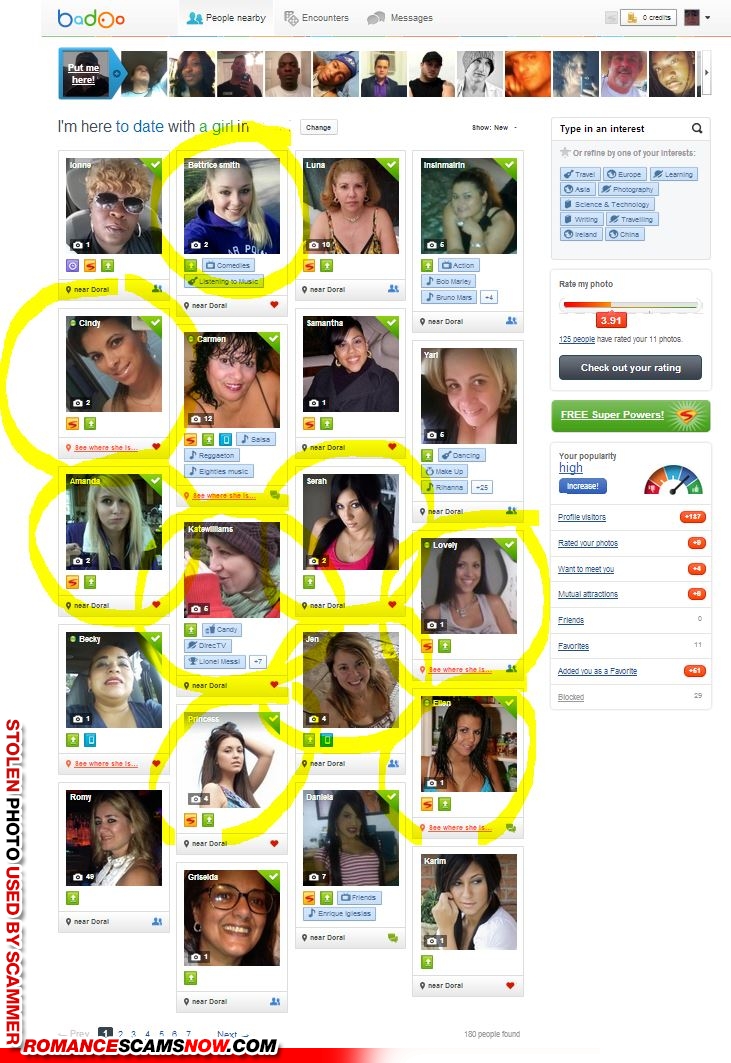 Just looking at new profiles on Badoo.com we believe most are scammers!

Spotting Scammers: They Are Fairly Easy To Spot From The Following

This applies to dating website profiles and also social media:

As a user on a dating site, we suggest that you make your photos PRIVATE.  That way you can share them when you want, but keep them hidden from the scammers.

We strongly urge ALL Dating Website owners to do the right thing, and do a comparison between the location given for the profile and the login IP addresses – this is easy tech and something all dating sites should do.  If they don’t match, send them for a human review or delete them – this is the best way to restore faith in your site!