We Received A Comment Recently From A Real Life Impersonation VictimImpersonation Victim An impersonation victim is someone who has had their identity or images used by someone who imitates or copies their identity to scam or defraud another. This is a criminal act such as identity theft, online impersonation scam, or other fraud. This is usually where the criminal is trying to assume the identity of this victim, in order to commit fraud, such as accessing confidential information or gaining property from someone else. About The Theft And Use Of His Photos:

Real Soldiers having their Photo’s and Names Stolen by imposters, mostly in Nigeria. I have over 193 Fake Facebook Pages using all of my Pictures and variations of my Name. Nigerian FraudFraud In law, fraud is intentional deception to secure unfair or unlawful gain (money or other assets), or to deprive a victim of a legal right. Fraud can violate civil law (e.g., a fraud victim may sue the fraud perpetrator to avoid the fraud or recover monetary compensation) or criminal law (e.g., a fraud perpetrator may be prosecuted and imprisoned by governmental authorities), or it may cause no loss of money, property, or legal right but still be an element of another civil or criminal wrong. The purpose of fraud may be monetary gain or other benefits, for example by obtaining a passport, travel document, or driver's license, or mortgage fraud, where the perpetrator may attempt to qualify for a mortgage by way of false statements. A fraud can also be a hoax, which is a distinct concept that involves deliberate deception without the intention of gain or of materially damaging or depriving a victim. Imposters posing as me – using my photos and full name pretending and asking single women for money. On going problem. at one point I discovered over 193 fake Facebook sites using my name (Forward and Backwards) and photos 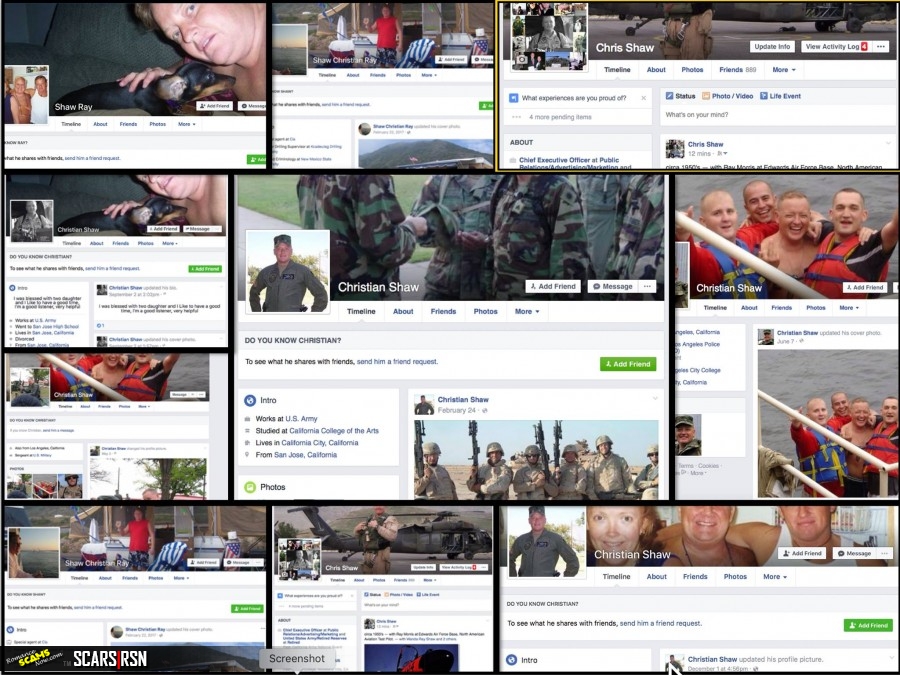 We are sincerely thankful for his reaching out in this way.

So many women refuse to believe that those photos were stolen and simply used by scammers – many actually believe they are either in love with the real man in the photos or that he personally is scamming them from Nigeria or Ghana or wherever. We have said it many times, U.S. Soldiers in War Zones do not have the time or ability to be online talking to strangers on Facebook or Dating Sites.

Their photos are stolen, and they are victims too of identity theftIdentity Theft Identity theft is when someone uses another person's personal identifying information, without their permission, to commit fraud or other crimes. In both the U.K. and the United States it is the theft of personally identifiable information. Identity theft deliberately uses someone else's identity as a method to gain financial advantages or obtain credit and other benefits, and perhaps to cause other person's loss. The person whose identity has been stolen may suffer adverse consequences, especially if they are falsely held responsible for the perpetrator's actions. Personally identifiable information generally includes a person's name, date of birth, social security number, driver's license number, bank account or credit card numbers, PINs, electronic signatures, fingerprints, passwords, or any other information that can be used to access a person's financial resources.. They are being impersonated for the sole purpose of defrauding you and other women of your money, breaking your hearts and lives in the process.

Regardless of how hard you fell for a photo, this is the reality of these scamsScams A Scam is a confidence trick - a crime -  is an attempt to defraud a person or group after first gaining their trust through deception. Scams or confidence tricks exploit victims using their credulity, naïveté, compassion, vanity, irresponsibility, or greed and exploiting that. Researchers have defined confidence tricks as "a distinctive species of fraudulent conduct ... intending to further voluntary exchanges that are not mutually beneficial", as they "benefit con operators ('con men' - criminals) at the expense of their victims (the 'marks')". A scam is a crime even if no money was lost. and you have to accept it.

If you can’t you are on the path to mental illness.