SCARSSCARS SCARS - Society of Citizens Against Relationship Scams Inc. A government registered crime victims' assistance & crime prevention nonprofit organization based in Miami, Florida, U.S.A. SCARS supports the victims of scams worldwide and through its partners in more than 60 countries around the world. Incorporated in 2015, its team has 30 years of continuous experience educating and supporting scam victims. Visit www.AgainstScams.org to learn more about SCARS.™ Special Report: Online Vigilantes Can Actually Hurt CriminalCriminal A criminal is any person who through a decision or act engages in a crime. This can be complicated, as many people break laws unknowingly, however, in our context, it is a person who makes a decision to engage in unlawful acts or to place themselves with others who do this. A criminal always has the ability to decide not to break the law, or if they initially engage in crime to stop doing it, but instead continues. Cases

A few months ago in Australia, the country was rocked by three shocking crimes in one week, and the public wanted justice.

Naturally, the modern version of the gossip coffee klatch sprang to life on social media. Instead of just talking about the crimes, everyone wanted a piece of these criminals and proceeded to post anything and everything about them. 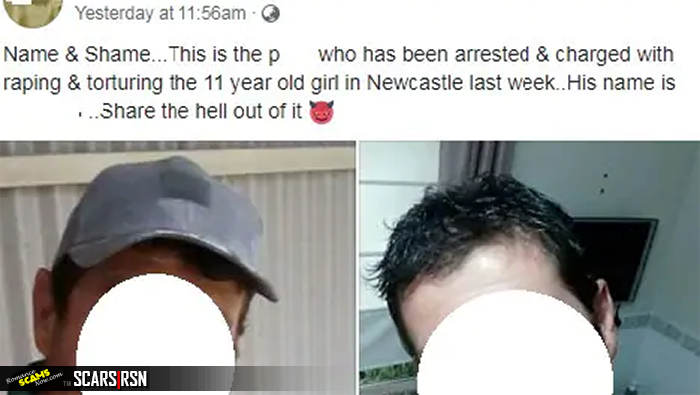 Example Name & ShameShame Shame is an unpleasant self-conscious emotion typically associated with a negative evaluation of the self; withdrawal motivations; and feelings of distress, exposure, mistrust, powerlessness, and worthlessness. Post

Posting in this way satisfies an inner urge for vengeance, not justice. Justice is a slow precise process of determining guilt. Vigilantes want revenge, not justice. Remember the part about innocent until proven guilty?

But Social Media Posts Like These Do The Exact Opposite. And This Becomes A Lesson For Us That Fight Scammers As Well!

AUSTRALIANS were furious. As a country, they were reeling from three horrific crimes occurring within days of each other — crimes which have left two young women dead and a young child’s life altered forever.

A 22-year-old budding comedian Eurydice Dixon’s promising life was cut short when she was stalked, raped and murdered as she walked home from a gig in Melbourne, Victoria, Australia.

On the same day Ms. Dixon was killed, an 11-year-old girl was snatched on her way to primary school in Newcastle before being sexually assaulted for hours on end.

And the following day, a 19-year-old man was charged with the murder of his flatmate, 28-year-old Sydney woman Qi Yu, who had been missing for many days.

This is exactly what happens to scamScam A Scam is a confidence trick - a crime -  is an attempt to defraud a person or group after first gaining their trust through deception. Scams or confidence tricks exploit victims using their credulity, naïveté, compassion, vanity, irresponsibility, or greed and exploiting that. Researchers have defined confidence tricks as "a distinctive species of fraudulent conduct ... intending to further voluntary exchanges that are not mutually beneficial", as they "benefit con operators ('con men' - criminals) at the expense of their victims (the 'marks')". A scam is a crime even if no money was lost. victims!

It’s tempting, then, to feel like we can fight back against the gross injustice in some small way, by sharing photos of the people accused of these heinous crimes online, in an effort to “name and shame” them.

After all, the media is blurring their faces! Journalists aren’t reporting their names — and something has to be done, right?

With the click of a button, photos of the accused accompanied by accusations and speculation can be spread around the world — but while it can be satisfying to feel you are seeking justice, you could actually be doing the complete opposite.

In October 2016, The Conversation (see below ») published a piece on why “TRIAL BY SOCIAL MEDIA” can be such a problem for the criminal justice system – including law enforcement and the courts.

As senior criminology lecturers (Professors), Alyce McGovern and Sanja Milivojevic explained in the piece, sharing photos and speculation online could impact the accused’s right to a fair trial — which could ultimately lead to a lighter sentence or even a mistrial, which could see an offender walk free.

In places like West Africa this is not an issue, but in the developed countries it absolutely can be a major issue. Not only can it taint juries, but in the case of scammers, nothing published online can be used as evidence. The ONLY true “Chain of Custody” online reporting systems are those operated by governments (such as the FBIFBI FBI - Federal Bureau of Investigation The Federal Bureau of Investigation (FBI) is the domestic intelligence and security service of the United States and its principal federal law enforcement agency. Operating under the jurisdiction of the United States Department of Justice, the FBI is also a member of the U.S. Intelligence Community and reports to both the Attorney General and the Director of National Intelligence. A leading U.S. counter-terrorism, counterintelligence, and criminal investigative organization, the FBI has jurisdiction over violations of more than 200 categories of federal crimes, including financial fraud.’s IC3.gov ») and the SCARS|CDN™ which accepts reports on www.Anyscam.com », RomanceScamsNow.com », and over 100 other SCARS|CDN™ reporting locations. For online evidence to be accepted for use in law enforcement and trial it must come directly from the victim and have permanent traceability back to that victim with each step along the way providing certification of authentication. No online crime hater group does or is capable of that, so most of it is a waste of time in apprehending actual criminals unless reported through the SCARS Network »

Additionally, few people online consider that the “Name and Shame” game actually places them at risk of both violating law and becoming personally liable. Shaming is a form of defamation, and unless it is based upon established (legally established) fact the author is liable. If a criminal is ultimately arrested and is found not guilty, even if by a technicality, then everyone who posted about them is liable.

More Important Is The Damage It Can Do To Trying An Arrested Suspect!

“Activity on Facebook and Twitter can pose a threat to prosecutions and the right to a fair trial through practices such as sharing photos of the accused before an indictment, creation of hate groups, or jurors sharing their thoughts about a case online,” Alyce McGovern and Sanja Milivojevic wrote.

“In the Meagher case, Victoria Police used its Facebook page to educate the public about the consequences of such breaches. In addition, a web gag on social media was imposed by a magistrate who suppressed the information that might compromise the trial.” 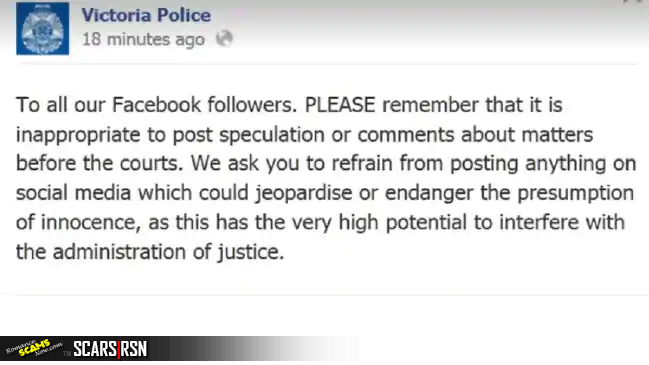 Posting fake photos could make you liable to the impersonation victimImpersonation Victim An impersonation victim is someone who has had their identity or images used by someone who imitates or copies their identity to scam or defraud another. This is a criminal act such as identity theft, online impersonation scam, or other fraud. This is usually where the criminal is trying to assume the identity of this victim, in order to commit fraud, such as accessing confidential information or gaining property from someone else. too! Not to mention any criminal extradited to the U.S., Canada, Australia or New Zealand, the U.K. or Europe!

Playing vigilante is not a game, and while there is freedom of speech, there is not freedom to defame. These are not games and must be done in compliance with the law or else you become the criminal. Great care must be taken if you pretend to be a journalist and want to report on crime. Incompetence and ignorance are no excuse under the law.

Exposing scammers has some value to help people learn if they are being scammed. Beyond that almost no value except to feed the rageRage Anger, also known as wrath or rage, is an intense emotional state involving a strong uncomfortable and non-cooperative response to a perceived provocation, trigger, hurt or threat. About one-third of scam victims become trapped in anger for extended periods of time following a scam. A person experiencing anger will often experience physical effects, such as increased heart rate, elevated blood pressure, and increased levels of adrenaline and noradrenaline. Some view anger as an emotion that triggers a part of the fight or flight response. Anger becomes the predominant feeling behaviorally, cognitively, and physiologically. Anger can have many physical and mental consequences. While most of those who experience anger explain its arousal as a result of "what has happened to them", psychologists point out that an angry person can very well be mistaken because anger causes a loss in self-monitoring capacity and objective observability. of victims trapped by their own hate.

Social Media And Crime:
The Good, The Bad And The Ugly

SCARS, its divisions, affiliates, and members are the ONLY private entity that both follows the law, its Code of Conduct », the NOVA Standard », and the Ethical Standard for Reporting of Scammers!

Please feel free to share your opinions on this topic in the comments below!

SCARS, RSN, Romance Scams Now, SCARS|GLOBAL, SCARS, Society of Citizens Against Relationship Scams, Society of Citizens Against Romance Scams, SCARS|ANYSCAM, Project Anyscam, Anyscam, SCARS|GOFCH, GOFCH, SCARS|CHINA, SCARS|CDN, SCARS Cybercriminal Data Network, Cobalt Alert, Scam Victims Support GroupSupport Group In a support group, members provide each other with various types of help, usually nonprofessional and nonmaterial, for a particular shared, usually burdensome, characteristic, such as romance scams. Members with the same issues can come together for sharing coping strategies, to feel more empowered and for a sense of community. The help may take the form of providing and evaluating relevant information, relating personal experiences, listening to and accepting others' experiences, providing sympathetic understanding and establishing social networks. A support group may also work to inform the public or engage in advocacy. They can be supervised or not. SCARS support groups are moderated by the SCARS Team and or volunteers., are all trademarks of Society of Citizens Against Relationship Scams Incorporated.