SCARSSCARS SCARS - Society of Citizens Against Relationship Scams Inc. A government registered crime victims' assistance & crime prevention nonprofit organization based in Miami, Florida, U.S.A. SCARS supports the victims of scams worldwide and through its partners in more than 60 countries around the world. Incorporated in 2015, its team has 30 years of continuous experience educating and supporting scam victims. Visit www.AgainstScams.org to learn more about SCARS.|ANALYTICS™ : New Study Finds Victims Not Reporting

A new SCARS|ANALYTICS Study finds that Anti-ScamScam A Scam is a confidence trick - a crime -  is an attempt to defraud a person or group after first gaining their trust through deception. Scams or confidence tricks exploit victims using their credulity, naïveté, compassion, vanity, irresponsibility, or greed and exploiting that. Researchers have defined confidence tricks as "a distinctive species of fraudulent conduct ... intending to further voluntary exchanges that are not mutually beneficial", as they "benefit con operators ('con men' - criminals) at the expense of their victims (the 'marks')". A scam is a crime even if no money was lost. Groups that post photos are convincing victims that reporting to police is not necessary!

A study conducted by SCARS|ANALYTICS division over a 5 month period during 2019 of 9,263 scam victims shows surprising results.

As we all know, reporting crimes to the police and national police (FBIFBI FBI - Federal Bureau of Investigation The Federal Bureau of Investigation (FBI) is the domestic intelligence and security service of the United States and its principal federal law enforcement agency. Operating under the jurisdiction of the United States Department of Justice, the FBI is also a member of the U.S. Intelligence Community and reports to both the Attorney General and the Director of National Intelligence. A leading U.S. counter-terrorism, counterintelligence, and criminal investigative organization, the FBI has jurisdiction over violations of more than 200 categories of federal crimes, including financial fraud.) is critical in helping government fully understand the scope of these crimes. Understanding helps government allocate resources and prioritize enforcement. This helps identify gaps in laws, treaties, and enforcement that can be corrected to enhance global and local policeLocal Police The Local Police is your first responder in most countries. In most English-speaking countries and in Europe report to them first. In other countries look for your national cybercrime police units to report scams to. In the U.S., Canada, & Australia, you must report to the local police first. actions to reduce or stop crime.

Yet with the continued expansion of “one person” or small amateur scammerScammer A Scammer or Fraudster is someone that engages in deception to obtain money or achieve another objective. They are criminals that attempt to deceive a victim into sending more or performing some other activity that benefits the scammer. photo posting “groups” pretending to be real organizations, victims are becoming more confused than ever according to data collected and compiled by SCARS.

This suggests that most so-called “anti-scam” groups are committing fraudFraud In law, fraud is intentional deception to secure unfair or unlawful gain (money or other assets), or to deprive a victim of a legal right. Fraud can violate civil law (e.g., a fraud victim may sue the fraud perpetrator to avoid the fraud or recover monetary compensation) or criminal law (e.g., a fraud perpetrator may be prosecuted and imprisoned by governmental authorities), or it may cause no loss of money, property, or legal right but still be an element of another civil or criminal wrong. The purpose of fraud may be monetary gain or other benefits, for example by obtaining a passport, travel document, or driver's license, or mortgage fraud, where the perpetrator may attempt to qualify for a mortgage by way of false statements. A fraud can also be a hoax, which is a distinct concept that involves deliberate deception without the intention of gain or of materially damaging or depriving a victim. by misleading victims into believing that they perform services they do not, have expertise they do not, and have accomplishments they do not. 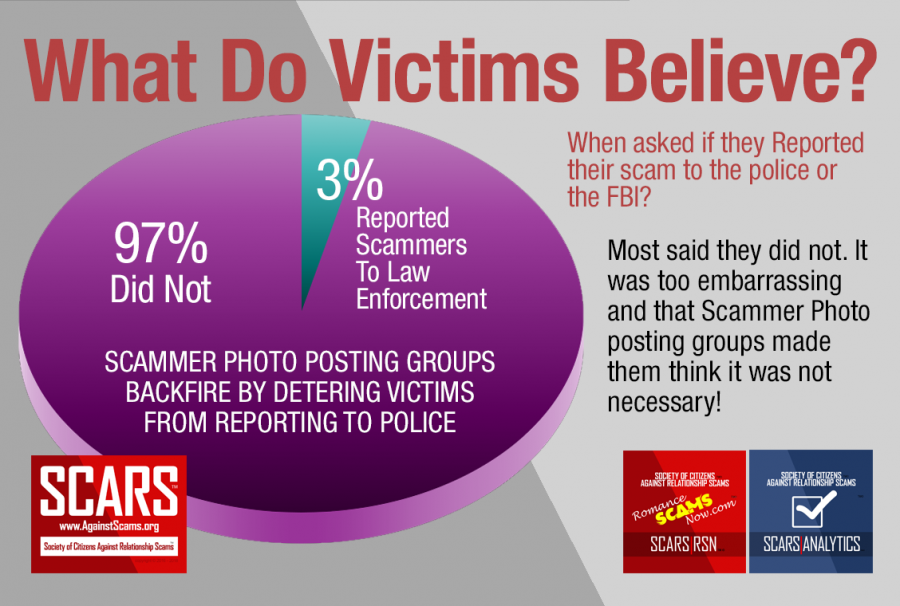 Relating To Other Aspects of Pretender Anti-Scam Groups

As a result of these mistaken or false beliefs, it means that most scammers are not engaged in activities that actually do help reduce scamming.

We believe that the conclusions of this study are clear.

With the increase (in fact explosion) of amateur anti-scam groups on the webs and social media, it is creating a false narrative that these groups are addressing the law enforcement role in inhibiting cybercrime. That they are explicitly convincing victims that “exposing” scammers will stop scamming worldwide, and that these groups are playing an active role in direct enforcement.

Additionally, this study hints that many of these amateur groups are delivering unlawful mental healthMental health Mental health, defined by the World Health Organization (WHO), is "a state of well-being in which the individual realizes his or her own abilities, can cope with the normal stresses of life, can work productively and fruitfully, and is able to make a contribution to his or her community". According to WHO, mental health includes "subjective well-being, perceived self-efficacy, autonomy, competence, intergenerational dependence, and self-actualization of one's intellectual and emotional potential, among others". From the perspectives of positive psychology or of holism, mental health may include an individual's ability to enjoy life and to create a balance between life activities and efforts to achieve psychological resilience. Cultural differences, subjective assessments, and competing professional theories all affect how one defines "mental health". services directly to scam victims in the form of counseling – especially one-to-one counseling via chats and messenger. Which is taking place outside of the supervision of occupational licensing bodies, and the regulation of medical review boards around the world.