SCARS™ Scammer Urban Legends: Chapter 7 – No One Is Doing Anything!

SCARS™ Scammer Urban Legends: Chapter 7 – No One Is Doing Anything!

SCARSSCARS SCARS - Society of Citizens Against Relationship Scams Inc. A government registered crime victims' assistance & crime prevention nonprofit organization based in Miami, Florida, U.S.A. SCARS supports the victims of scams worldwide and through its partners in more than 60 countries around the world. Incorporated in 2015, its team has 30 years of continuous experience educating and supporting scam victims. Visit www.AgainstScams.org to learn more about SCARS.™ ScammerScammer A Scammer or Fraudster is someone that engages in deception to obtain money or achieve another objective. They are criminals that attempt to deceive a victim into sending more or performing some other activity that benefits the scammer. Urban Legends: Chapter 7 – No One Is Doing Anything!

Nothing Is Being Done?

We constantly hear from victims that say that no one is doing anything, or that nothing is being done!

Unfortunately, it can certainly seem that way.

But nothing could be farther from the truth.

Most people believe that all crime is handled the way they see it on TV. You report it, and the police jump on it immediately. By the end of the episode, the criminals are found, arrested, tried in court, and sentenced.

Except that the real world doesn’t work like that. 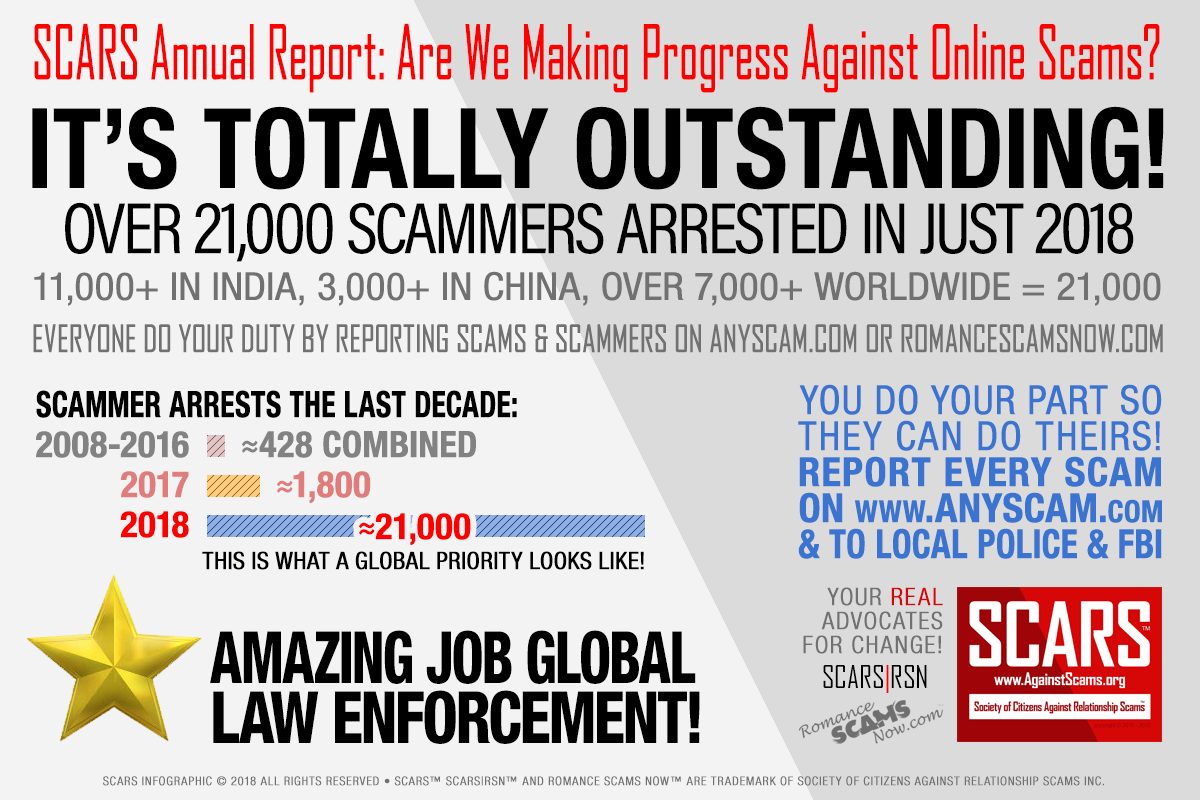 Most scammers do not live where you live – regardless of what their fake profiles say.

They live in Africa, Malaysia, Russia, and elsewhere. So by definition, they live in another country with their own laws and their own law enforcement – most of them are also very corrupt.

In most of the world, the process to get a criminalCriminal A criminal is any person who through a decision or act engages in a crime. This can be complicated, as many people break laws unknowingly, however, in our context, it is a person who makes a decision to engage in unlawful acts or to place themselves with others who do this. A criminal always has the ability to decide not to break the law, or if they initially engage in crime to stop doing it, but instead continues. arrested in another country is extreme, then you have to deal with the extradition to a favorable country where the criminal can be tried. But scammers live in shit-hole countries where the rule of law can be bought for not very much money. In Ghana or Nigeria, you can buy a cop for US$10 a month!

Additionally, in the case of West Africa, as long as they are not scamming local citizens their country really doesn’t care. Why should they waste resources arresting people when they actually need the cash flowing into their country?

This makes the vast majority of scammers immune from arrest and prosecution.

Of course, there are exceptions, but those are so few as to be almost nonexistent.

Second, Do You Even Know Who Scammed You?

With over 400 million fake identities in use (per SCARS analysis 2017), it is rare that a victim knows the real identity of their scammers.

Notice we said scammers – plural – because most victims are scammed by teams of scammers. There will be multiple individuals communicating with the victim under one identity. Plus the scammers us others to pick up the money – either mules (a victim who is willingly helping a scammer, though many do not know it) or their agents in the money transfer services. The result is: it is very unlikely that you have the scammer’s name.

Who will the police arrest if you don’t have a real name?

Most scamScam A Scam is a confidence trick - a crime -  is an attempt to defraud a person or group after first gaining their trust through deception. Scams or confidence tricks exploit victims using their credulity, naïveté, compassion, vanity, irresponsibility, or greed and exploiting that. Researchers have defined confidence tricks as "a distinctive species of fraudulent conduct ... intending to further voluntary exchanges that are not mutually beneficial", as they "benefit con operators ('con men' - criminals) at the expense of their victims (the 'marks')". A scam is a crime even if no money was lost. victims somehow believe that they will hand over a name and someone will immediately launch a full-scale global investigation to find who the scammer really is and where they are.

We receive over 150 such demands a day.

But think about that… Who will pay for all of that investigative work, across multiple borders in multiple countries?

Victims by and large, are unwilling to even report scammers, much less financially support investigations. Also, any investigative service or company that offers this for a fee is most likely a scammer themselves.

The FBIFBI FBI - Federal Bureau of Investigation The Federal Bureau of Investigation (FBI) is the domestic intelligence and security service of the United States and its principal federal law enforcement agency. Operating under the jurisdiction of the United States Department of Justice, the FBI is also a member of the U.S. Intelligence Community and reports to both the Attorney General and the Director of National Intelligence. A leading U.S. counter-terrorism, counterintelligence, and criminal investigative organization, the FBI has jurisdiction over violations of more than 200 categories of federal crimes, including financial fraud. will do it, right?

It is true the national police forces do investigate crimes, but they only have the resources they have and are not able to chase down every possible report that is made.

What they do instead is accumulate information until they have enough to justify more action.

This is one of the keys to the SCARS|CDN™ Anti-Scam Data Reporting Network (www.Anyscam.com, www.RomanceScamsNow.com, and about 50 other reporting entry points – including the RSN Facebook pages). Information is collected and distributed to those that need it, and it is maintained permanently so that as more information comes in it can trigger investigations.

Every report matters, but not always at that moment.

Most victims do not even bother to report scammers, and those that do rarely have complete information. So it has to be aggregated into a massive database where it can be searched and cross-referenced to be made usable. This is how all law enforcement really works – data collection, data filtering and mining, and data reporting to produce a picture that can be understood and exploited.

Fourth, How Do They Get Arrested?

There are two main enforcement models being employed now.

However, many countries where scammers operate are very serious about arrests, such as Malaysia, Singapore, Western Countries, and even the Philippines.

China is also now recognizing the danger that scammers play, and almost monthly are shipping back Chinese scammers caught in other countries back to China to stand trial. China even signed an agreement of principals with SCARS in December 2017.

In the United States scammer mules are now being prosecuted as well, especially those that not only receive and launder money, but that also receive and reship merchandise purchased from stolen credit cards. Europe is also beginning to follow this model too. Of course, the rest of the world has always treated scammer mules as criminals.

Fifth, Why Isn’t It Stopping?

Think about other kinds of crimes and how long it took to change society’s perception of these criminals! Rape, Drunk Driving, are just two that took more than a generation to change. Rape took nearly 100 years of criminal justice reform to create real change for victims and it is still far from perfect. Drunk Driving especially was a hard one – the laws already existed, they just needed to be consistently enforced. It took the creation of an organization called Mothers Against Drunk Driving, working tirelessly for a couple of decades to get us to the point that drunk driving is no longer tolerated.

The same is true for global online fraudFraud In law, fraud is intentional deception to secure unfair or unlawful gain (money or other assets), or to deprive a victim of a legal right. Fraud can violate civil law (e.g., a fraud victim may sue the fraud perpetrator to avoid the fraud or recover monetary compensation) or criminal law (e.g., a fraud perpetrator may be prosecuted and imprisoned by governmental authorities), or it may cause no loss of money, property, or legal right but still be an element of another civil or criminal wrong. The purpose of fraud may be monetary gain or other benefits, for example by obtaining a passport, travel document, or driver's license, or mortgage fraud, where the perpetrator may attempt to qualify for a mortgage by way of false statements. A fraud can also be a hoax, which is a distinct concept that involves deliberate deception without the intention of gain or of materially damaging or depriving a victim..

In 1991 our organization began observing and tracking online fraud. We tried all the usual techniques – education and exposing scammers, but victims don’t believe it will happen to them until it does. Then it is too late.

In 2015 the Society of Citizens Against Romance Scams [SCARS] (www.AgainstScams.org or www.AgainstScamc.org – both go to the same place) was founded by Dr. Tim McGuinness, a pioneer in ecommerce and co-founder of a multi-billion dollar online consumer electronics retailer.

The mission of SCARS is two-fold:

Since its founding, there have been more than 100 news laws enacted in 15 countries. 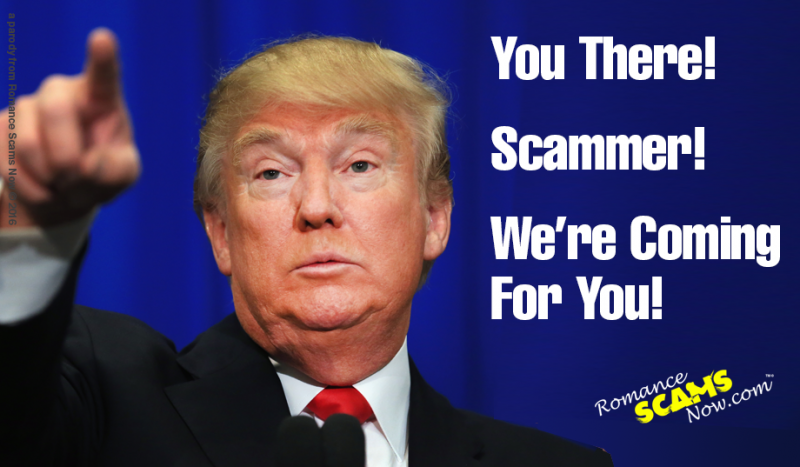 You There Scammer! We’re Coming For You! President Donald Trump

Sixth, More Needs To Be Done!

Unfortunately, there is too much aimless wasted effort in the anti-scam community. Too much is focused on hating scammers (and competing groups) and almost nothing on real changes.

SCARS is making a difference, and for the first time in 26 years, romance scamsScams A Scam is a confidence trick - a crime -  is an attempt to defraud a person or group after first gaining their trust through deception. Scams or confidence tricks exploit victims using their credulity, naïveté, compassion, vanity, irresponsibility, or greed and exploiting that. Researchers have defined confidence tricks as "a distinctive species of fraudulent conduct ... intending to further voluntary exchanges that are not mutually beneficial", as they "benefit con operators ('con men' - criminals) at the expense of their victims (the 'marks')". A scam is a crime even if no money was lost. are down by 22% in 2017 – mostly by improved global enforcement, information sharing, and common cause. But this work is costly, and funds are limited for this work. Today, almost no major funding comes from government to fight global fraud except for within the existing policing agencies. Those same policing agencies are a part of the problem since they grossly underestimate the magnitude of the problem (mostly because victims do not report these crimes) and are thinking locally instead of globally – however, this is changing and will change more as time passes.

Of course, hearing that work is being down is little comfort if you are already a victim. However, this is the path we have to follow. Nothing this major happens overnight – this is not to excuse it, but it is just the reality.

SCARS and their members are working every day to bring this plague to an end. The more you support those efforts the more weight they can bring to bear on it. The more you hide from the reality of this, the more you are enabling scammers.

Next time you see someone saying “Nothing Is Being Done” remind them that there is progress but we are all in this together!

Every voice is important as long as we all sing t