RSN™ ScamScam A Scam is a confidence trick - a crime -  is an attempt to defraud a person or group after first gaining their trust through deception. Scams or confidence tricks exploit victims using their credulity, naïveté, compassion, vanity, irresponsibility, or greed and exploiting that. Researchers have defined confidence tricks as "a distinctive species of fraudulent conduct ... intending to further voluntary exchanges that are not mutually beneficial", as they "benefit con operators ('con men' - criminals) at the expense of their victims (the 'marks')". A scam is a crime even if no money was lost. News: Another Nigerian Money Launderer Arrested

Nigerian EFCCEFCC Economic and Financial Crimes Commission The Economic and Financial Crimes Commission (EFCC) is a Nigerian law enforcement agency that investigates financial crimes such as advance fee fraud (419 fraud), scams, and money laundering. The EFCC was established in 2003, partially in response to pressure from the Financial Action Task Force on Money Laundering (FATF), which named Nigeria as one of 23 countries non-cooperative in the international community's efforts to fight money laundering. The agency has its head office in Abuja, Nigeria. Arraigns Man over FraudFraud In law, fraud is intentional deception to secure unfair or unlawful gain (money or other assets), or to deprive a victim of a legal right. Fraud can violate civil law (e.g., a fraud victim may sue the fraud perpetrator to avoid the fraud or recover monetary compensation) or criminal law (e.g., a fraud perpetrator may be prosecuted and imprisoned by governmental authorities), or it may cause no loss of money, property, or legal right but still be an element of another civil or criminal wrong. The purpose of fraud may be monetary gain or other benefits, for example by obtaining a passport, travel document, or driver's license, or mortgage fraud, where the perpetrator may attempt to qualify for a mortgage by way of false statements. A fraud can also be a hoax, which is a distinct concept that involves deliberate deception without the intention of gain or of materially damaging or depriving a victim. 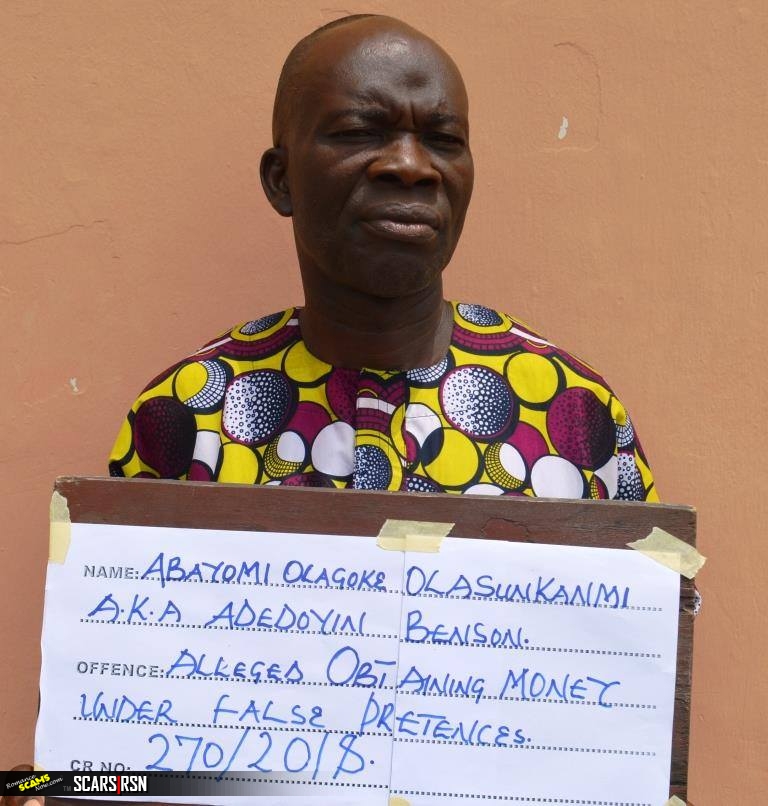 Nigerian ScammerScammer A Scammer or Fraudster is someone that engages in deception to obtain money or achieve another objective. They are criminals that attempt to deceive a victim into sending more or performing some other activity that benefits the scammer. Abayomi Olagoke Olasunkanmi Arrested

He was arraigned on a twelve-count charge of conspiracy and obtaining money under false pretense contrary to Section 8(a) and 1(3) of the Advance Fee FraudAdvance Fee Fraud An advance fee scam or fraud is a form of fraud and is one of the most common types of online confidence tricks. The scam typically involves promising the victim a significant share of a large sum of money, in return for a small up-front payment, which the fraudster claims will be used to obtain the large sum. If a victim makes the payment, the fraudster either invents a series of further fees for the victim or simply disappears. and Other Fraud Related Offences Act, No. 14 of 2006. The defendant, however, pleaded not guilty to the charges preferred against him.

One of the criminalCriminal A criminal is any person who through a decision or act engages in a crime. This can be complicated, as many people break laws unknowingly, however, in our context, it is a person who makes a decision to engage in unlawful acts or to place themselves with others who do this. A criminal always has the ability to decide not to break the law, or if they initially engage in crime to stop doing it, but instead continues. counts reads: “that you Abayomi Olagoke Olasunkanmi a.k.a. Adedoyin Benson, Babarinde Julius; Pastor Amos Komolafe (at large); Olajire Ezikiel (at large) and Amoo Kazeem (at large) on or about 20th day of June, 2017 at Osogbo within the Osogbo Judicial Division with intent to defraud obtained the sum of N350, 000. (Three Hundred and Fifty Thousand Naira) (USD $961.54) from Guaranty Trust Bank account No. 0034871309 belonging to Agbede Oluwasegun Olamide under the false pretence that it was for the purpose of buying chemicals to wash foreign currency (Dollars).

Justice Akanbi however, adjourned the case till the 3rd December, 2018 for a hearing on the bail application and commencement of trial.

Meanwhile, the court ordered that the defendant be remanded in prison custody pending the hearing and determination of his bail application.